Sitting on a park in Vienna after a huge thunderstorm, I find a moment of tranquillity and reflection.

Earlier on I had walked down into the city to have a wander. As I strolled along in a trance, the thick air made me feel drunk and my skin clammy.

Hot and humid throughout the day, dark clouds gathered far on the horizon. The blue sky lifted away, invaded by a heavy blanket of thick white, promising an unpredictable change in the weather but not giving any clues away. 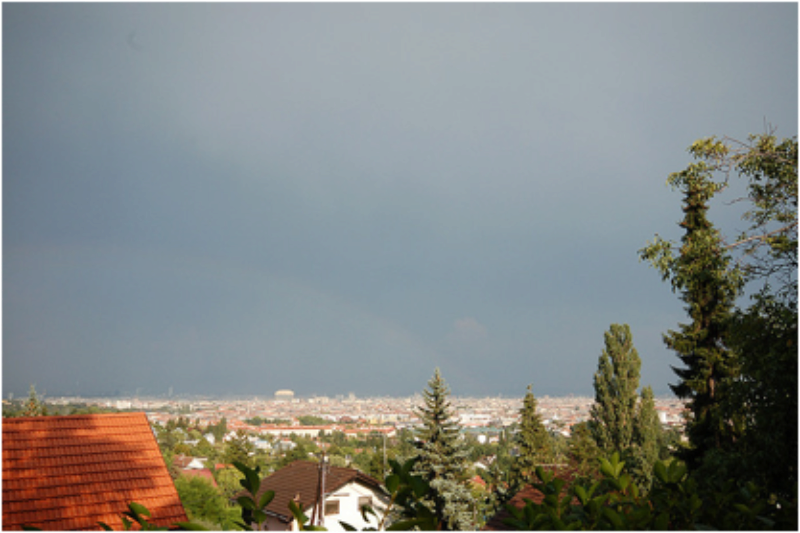 Drifting along, I reached a pedestrian crossing and stood there absorbed in my head, waiting automatically for the time to cross. The stream of cars moved in front of me, tonnes of metal passing within a metre of my comparatively frail shell. I glanced at the sky, not much change, just overcast and a little hazy.

With no warning and within a fraction of a second, the loudest thunderclap I have ever heard boomed out, seemingly simultaneously a huge bolt of fork lightning struck somewhere a block to my left. Every person in the vicinity, jumped, and subsequently cowered to the ground.

Within 30 seconds I experienced complete fear, shared shock and the uncontrollable urge to walk around like a headless chicken, followed by relief and a desire to get in a building.

I walked quickly down into an underground tram station, looking around me at the reaction of others. I felt disbelief at whether what I had just experienced had actually happened or just been a daydream as everything returned to normal and everyone looked calm again.

Lightning and further loud thunderclaps occurred but nothing like the first one. It was the closest I have ever been to such an event and it was so unexpected. The incident was exciting because of the contrast between the fear and relief of being alive after nature opening up so violently.

It caused me to reflect on the human survival instinct and the ability of nature to act without warning and with incredible power. It ripped me from my comfortable, trance-like mindset induced partly by the flows of the urban environment no doubt; the familiar routines and cogs of the city and people moving around me.

On my journey, I am more aware of my own need to survive. Finding food and water will become more difficult as we head into less developed countries. Unfamiliar situations on a daily basis will require us to use and extend our wits and skills.

This direct involvement in one’s own personal management and responsibility to stay alive is incredibly rewarding. It has the potential to become lost in the easy living Western world with instant electronic communication and convenience food. The effort is taken out of being sociable, moving from place to place, and staying alive.

Instead the focus is shifted towards earning money and having more and more material possessions. With these things we become more disconnected from our environment, which is the life support system for the survival of our species. With less connection to the environment, it is increasingly out of our minds and becomes an abstract entity in its own right, which is not conducive to building our respect.

On the flip side, getting out into the environment and enjoying it, from my experience, develops a deep respect and understanding of it. Doing something like riding a bike along a forest trail on a cool crisp sunny morning is an intensely enjoyable way to get up, get the adrenalin and endorphins pumping and it is so accessible and free, apart from getting a bike in the first place.