A couple of weeks ago I came across an article on bikepacking.com for a route round the Gower peninsula in Wales. I had been looking for a trip to do whilst I have some time off in between jobs. A friend had talked about doing Ultramarathons at the Gower and I used to go there on holiday when I was a kid. From the photos that accompanied the route on the website, it looked beautiful and varied with a bit of challenge in there although pretty doable. It would be a first outing for recently acquired bikepacking gear.

So, I set a date for leaving and spent an hour or so putting together the gear I would take the night before, separating it up into different piles for what I was going to carry on the bike and what was going in the car. I took a trip to Aldi and bought crisps, banana fruit bars, granola biscuits, tins of sardines, 4 2L bottles of water and some bread for sandwiches.

A ran a few checks over the bike and in the morning got everything in the car and left about 9 aiming to just avoid the rush hour. The drive down was relaxed, and I was lucky with the traffic. I passed the Malvern hills and sign for the Forest of Dean, the “Welcome to Wales” sign, passed Cardiff and then the industrial coastline around Port Talbot and then into Swansea.

I planned to street park, but I found a little car park near Sketty Lane and couldn’t see any restrictions after double checking. I built up the bike, attached all the luggage, had a cup of tea and drank a 2L bottle of water, applied sun cream and hit the road. 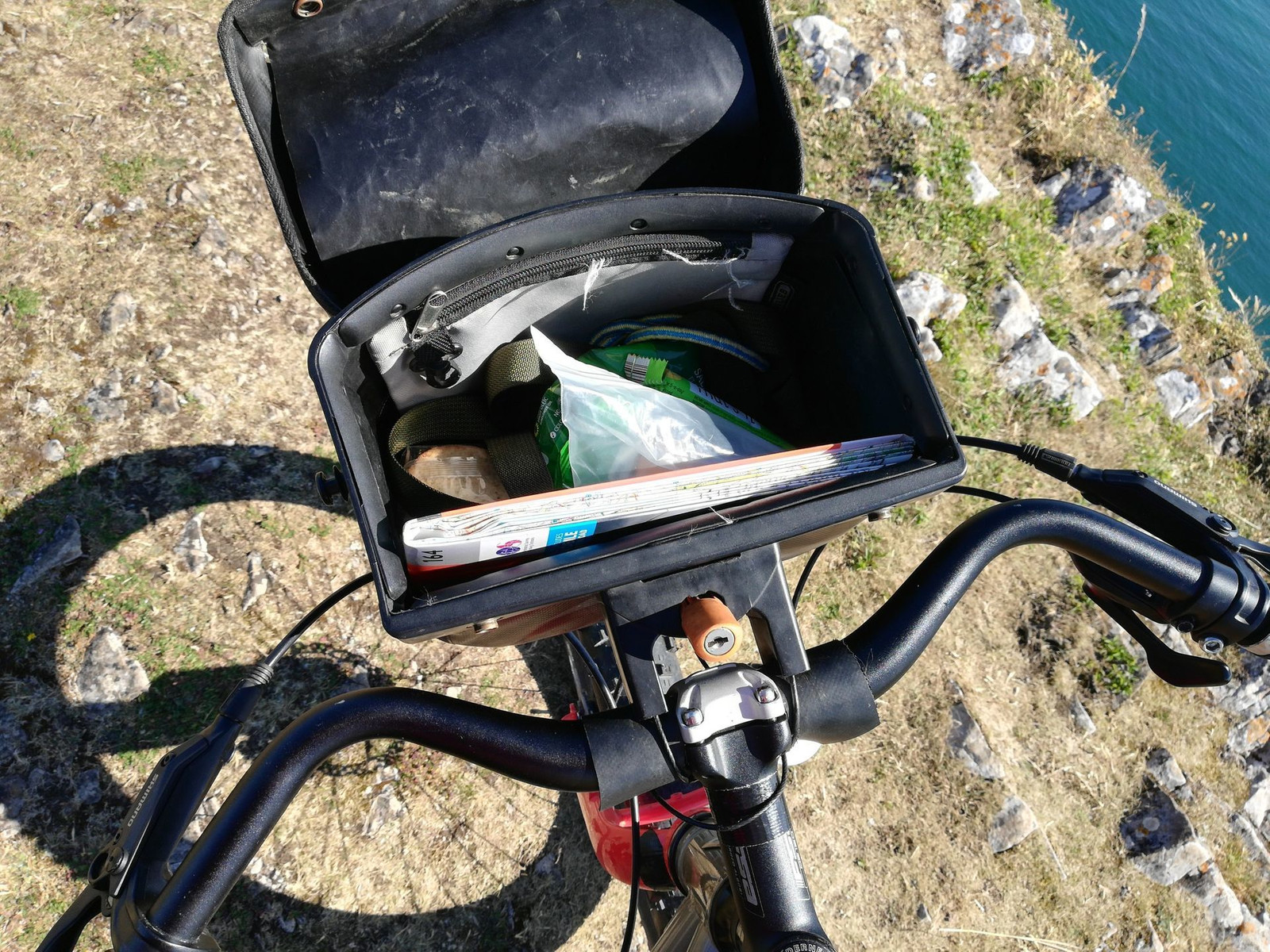 I downloaded the GPS route to use with the app Ride with GPS. This has an annoying feature where it makes a stupid noise if you are going off course, so I fairly quickly turned the feature off. I went to the seafront and then climbed up onto the common above some suburban areas, around the side of a golf course and then joined the main road for a few kilometres, before turning off down to the first detour to “Southgate”, where there was a nice opportunity to look out over the cliffs and take some photos. 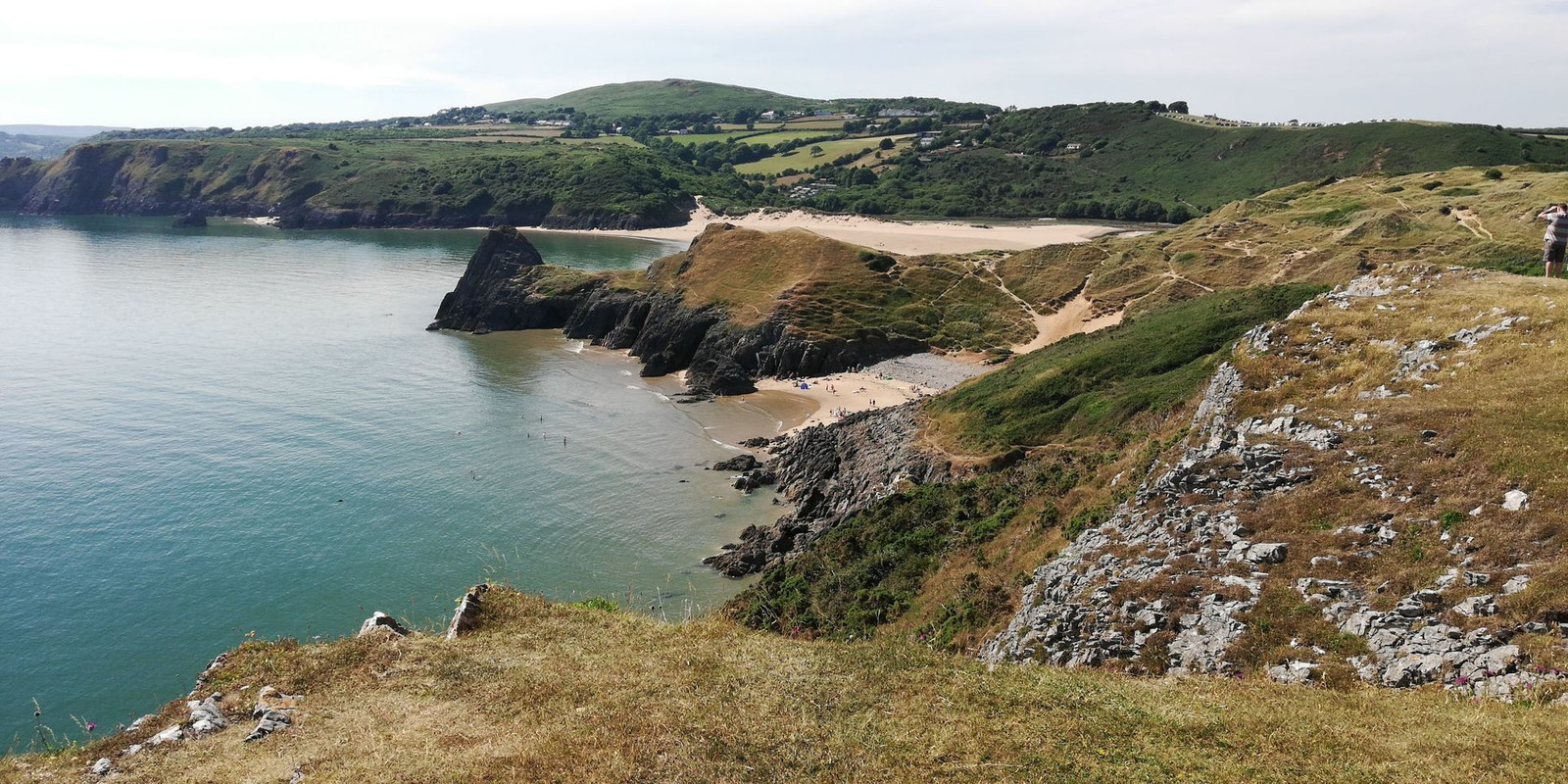 The next part of the route was described as a bike and hike over the sand dunes, which wasn’t wrong. The route turned back on itself up to a golf course and castle ruin before a rocky, loose downhill to a road and then a rocky, loose, long climb up to a campsite, crossing the main road at Penmaen. Then I joined the Gower Way climbing up onto the long hilly ridge, and the highpoint of Cefn Bryn, before turning south and heading down into the village of Reynoldston, across the Green near the King Arthur pub. 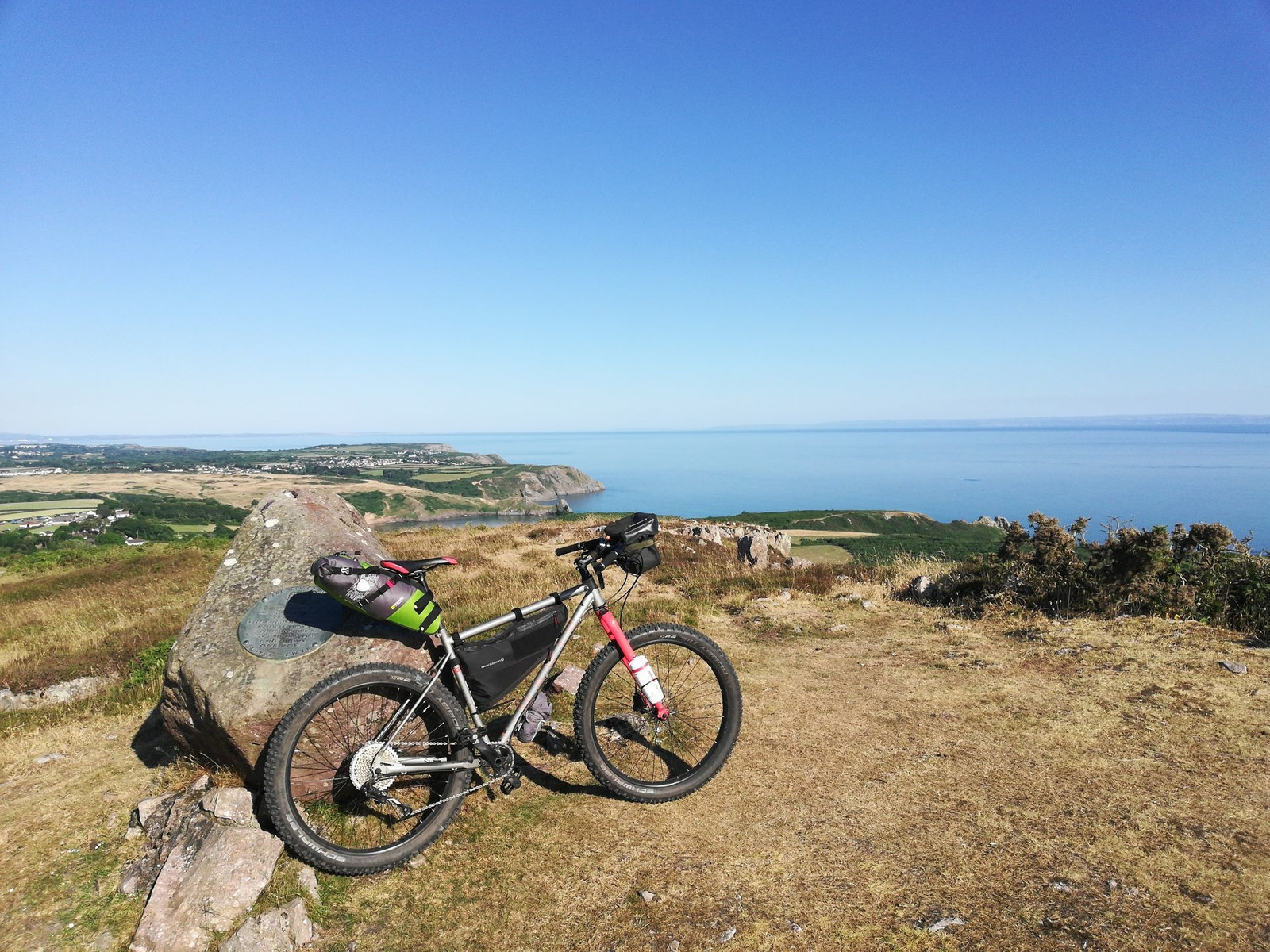 I then followed the road for a bit before turning off, climbing up passed a church and getting on a bridleway that runs west down the middle of peninsula to Rhossili. This part of the route ran mainly over agricultural land, so I did my best to avoid horseflies and herds of overexcited cattle. At this point I was nearing around 40km as I descended the road to Rhossili and found the pub just in term for the sunset. 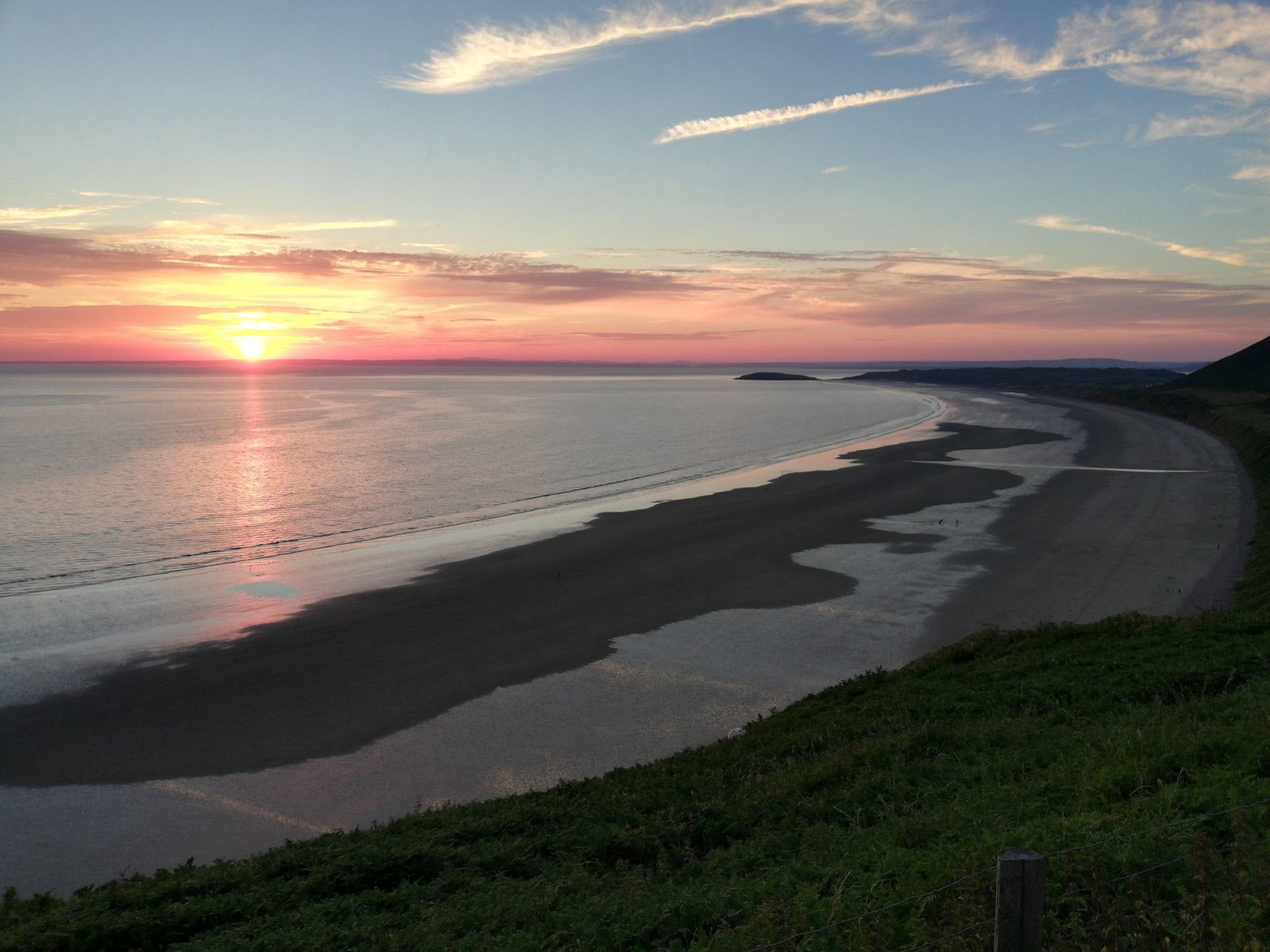 A local surfer kindly allowed me to store my bike in his car whilst I got dinner, watched the world cup and an incredible sunset. I got my bike back and headed down towards Worm’s Head to have a look and met some mountain bikers who suggested I camp next to Fall Bay round the corner. The moon now high in the sky casting a reflection on the sea was an ethereal sight. I lay out my groundsheet, mat and sleeping bag and took in the vista of my surroundings before getting a hit and miss night’s sleep and waking up at 4.10am by the sunrise, packed my stuff and rode back up to the cliff top with views over to Worm’s Head, the causeway now covered by high tide.

PDF of original article from bikepacking.com

I rode back through the village and decided to push my bike up a steep sided hill to the top of the ridge overlooking the sea. I rode the bike along the path on the ridge to the trig point where I took some photos and then took a path down into Llangennith. There I found it a bit difficult to find the path I wanted to follow but eventually rode out the village and then found a path that cut back in and took me onto the heath and Llanmadoc hill.

The route continued with lovely 360 views until I then got a bit lost again and descended on the road (Kyle’s Lane) to Burry Green. I followed the road to Landmore then took a wrong turn at Oldwalls and had to retrace my steps. Road riding with the bike tyres wasn’t the best of fun but the morning views were great. After Llanrhidian I took the road that goes over the Welshmoor and Penuel which was pretty quiet before cutting inland and joining the B4271 and working my way to the Dunvant road where on my route there started a nice old railway track with detours off into bike trails. This bit was all gradual descent and cool under the cover of the trees.

It was well worth putting together the kit and bike, getting over to the Gower and riding the loop. There is plenty of variety of the peninsula, great food, friendly people and a lot to explore. I’m glad I found the route through bikepacking.com and I would highly recommend the Gower as a place to tour and explore.