The other day I was cycling towards Trabzon.  We cycled in a number of dark, ominous looking tunnels. I’m cycling along, and then there it is, another black hole. My blood pressure rises, the hard shoulder thins and squeezes me off onto the road to share it with the multi-tonne trucks flying past, spraying me with muddy water. I check over my shoulder, hopefully I will make it through, before being chased by the next vehicle.

Each vehicle sounds exponentially louder, like a plane taking off.  I pedal like fury through the tunnel. This is repeated a number of times, then we are about to go into a particularly long 3 km tunnel and an orange van with flashing lights pulls up behind us before we take the plunge. The guy leans out the window. I assume they want to tell us we’re not allowed to cycle through the tunnels.

I feign ignorance or deafness and pedal into the tunnel at full pelt helped by a downhill.  After a couple of minutes of pedalling, I slow down and Tom catches up followed by the van shouting ‘we have an escort’. I suddenly feel silly for my pre-conception and a little more important for a few seconds.

The tunnel seems to go on for ages, pedalling into the concrete world, illuminated by the glow of the safety lights, fire exits and the flashing lights from the van. I feel my mind drifting away into some sort of trance, pedalling along following Tom’s back wheel; a very strange feeling. Back into daylight and downhill to Ordu, the next town.

I have Celtic music on the mp3 player, the album dubiously titled ‘Celtic Quest’. The tracks contain sound effects in the background of the sea, birdsong and thunder. Some of the instruments used include bagpipes and fiddles and may be described as jigs or ballads, I presume.

The music is relaxing and evokes images of warm fireplaces, jars of ales, and snow outside whilst cocooned in a toasty warm living room. This is far from my current situation, freewheeling through the Turkish mountains on a grey dual carriageway. 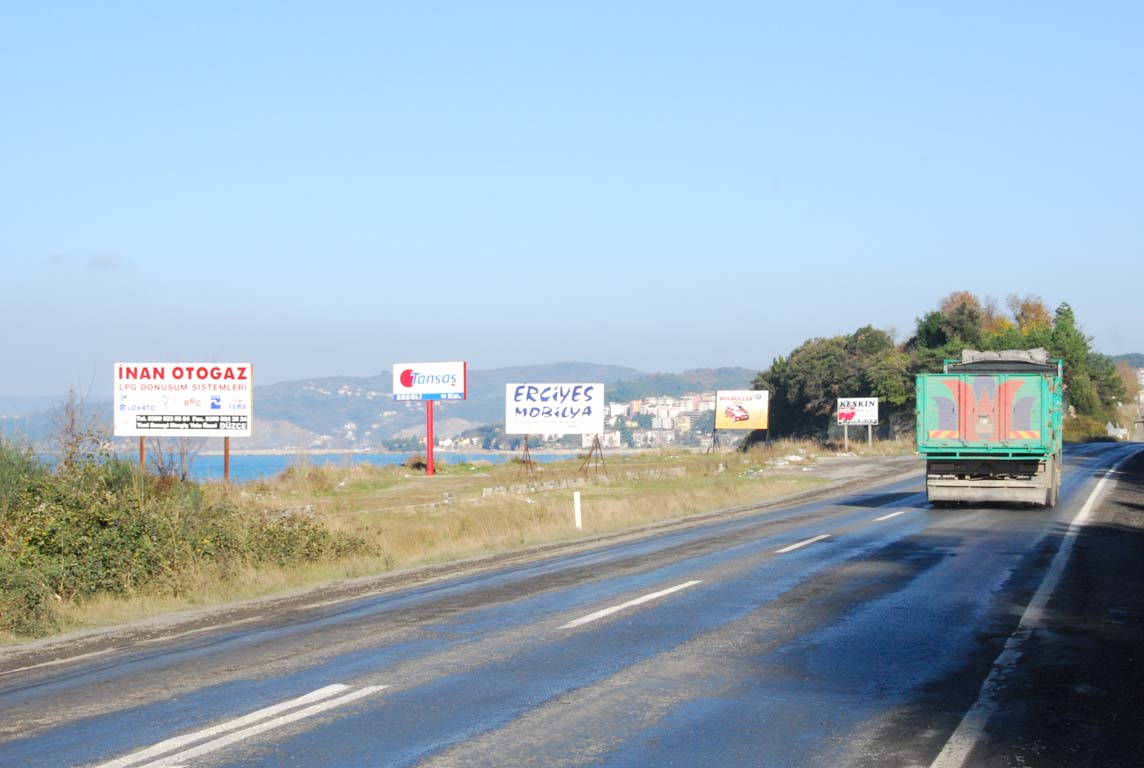 We’re making excellent progress recently with good flat(ish) roads, doing around 100km a day, which explains how we are now in Trabzon, and hope to get to Georgia for Christmas day, leaving tomorrow.

Listening to the 2nd track on Miles Davis - Kind of Blue, it’s almost Christmas. It makes me reminiscent of a warm restaurant, a romantic atmosphere, with good food, ale and a crackling fire, possibly with female company. Instead I’m in a strange place, which is cold.

People look at me funnily and kids pester me. I think, my wandering mind’s visions are arousing memories from my past which I wonder if its a strange survival mechanism, encouraging me to go somewhere warmer and more comfortable.

However, I am happy and the music fits well to the movements of the people, the cars and life. Blissfully living, I observe an everyday meeting between people in the street and their animated body language whilst gesturing to each other.

The leaves dance around on the pavement. A chilling wind penetrating my 2 layers, and I ignore my body’s increasingly louder requests to get warmer, bathing in the masochistic moment of bracing coldness. The traffic lights change.  It’s 6 degrees - a chilling enough day. Where is Tom? Behind, probably chai-jacked?

Satellite dishes affixed on concrete balconies point in a myriad directions as if they are all specifically positioned to pick up a slightly different frequency. Today we cycled around Trabzon trying to observe the Bayram Islamic Festival where rams are slaughtered.

We didn’t know what to expect and thought it would be a public festival in the centre, and the best way to see it would be to pootle around on the bikes. After a couple of hours of walking around mostly dead streets and closed shops, we decided to cycle up to the Ataturk burial place.

Through a chance meeting, we met a friendly 28 year old Turkish man, Alper, at a fruit stall who took us round a residential area where a number of families and groups in the community were gathered around piles of meat from the slaughter.

We came across another family who were about to slaughter a ram, which was tied up. We stood with the bikes and waited chatting to the younger members of the family kicking a football around. It was strange to see the animal there, shortly to reach the end of its life.

An older man came over and we said a passing ‘merhaba’ and he indicated that the ram would be slaughtered shortly. The process was quick and I couldn’t see much as people were gathered closely around. It was a calm and private family affair, but very intriguing and an interesting insight into this unknown ceremony.