Up at 5.30am I took the train from Peckham Rye over to Victoria. I took the bus from Victoria (booked in advance £6.50 a single). I felt self-conscious with my rucksack wondering if people thought I was a tramp, although I am kind of a nomad so it’s not really a strange feeling as I watched all the commuters on the morning train. I met a friend from my course, Esta who is studying environmental design and creating a ‘living sustainably’ kit as part of her work, and also a big fan of hiking, and we got on the bus at Victoria coach station.

I read some of Catherine Malabou’s ‘What Should We Do with our Brains’ (a paper from my course reading list about neuroplasticity) whilst on the coach, torrential rain outside didn’t look too promising weather-wise. I was glad I brought my waterproofs.

At the bus station in Newport, I we hopped onto a stagecoach bus buying an ‘Explorer’ ticket which cost £6.40 and took us all the way to Merthyr with one stop on the way in Blaenavon. The rain unsurprisingly was ever present in a lively Merthyr. We bought a few items of food from Iceland which is probably the weirdest supermarket. It sells entirely frozen food with an additional narrow selection of packaged foods. The aisles seemed designed, so you got wedged next to other shoppers and have no choice but to browse frozen chickens while you wait to free yourself.

We left and were directed by a local to ‘Spoons’ for a crap meal accompanied by a lovely pint of ‘Bledynn’ ale at around 6%. Esta, having recently moved from Venezuela, wasn’t that familiar with Wetherspoons, so I took it as my duty to introduce her to it. We donned our waterproofs and began the walk out of the town.

I used my compass to navigate out of town. This worked well - we crossed over a large A road and were into muddy hills north of the town. We followed along ‘the Heritage trail’ along an old mine and then beside part of the Brecon Beacon’s railway up to the Pontsicil reservoir. 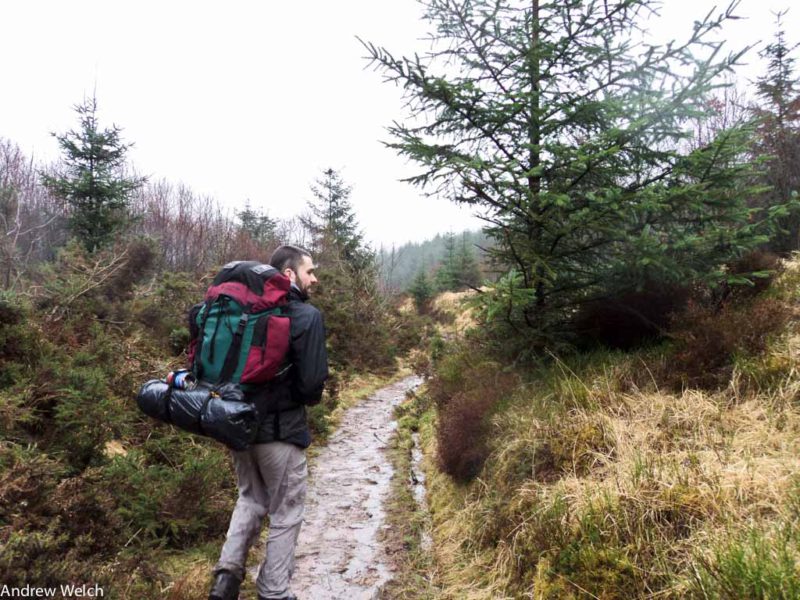 We were planning on wild camping, but I knew that in Wales it’s not necessarily allowed so I was interested to see how it would pan out. We had been informed earlier by a local lady, when enquiring about a place to stay, that one side of the lake was private property, and we would have to walk the other side of the lake and that we could ask in a pub in the village about accommodation. 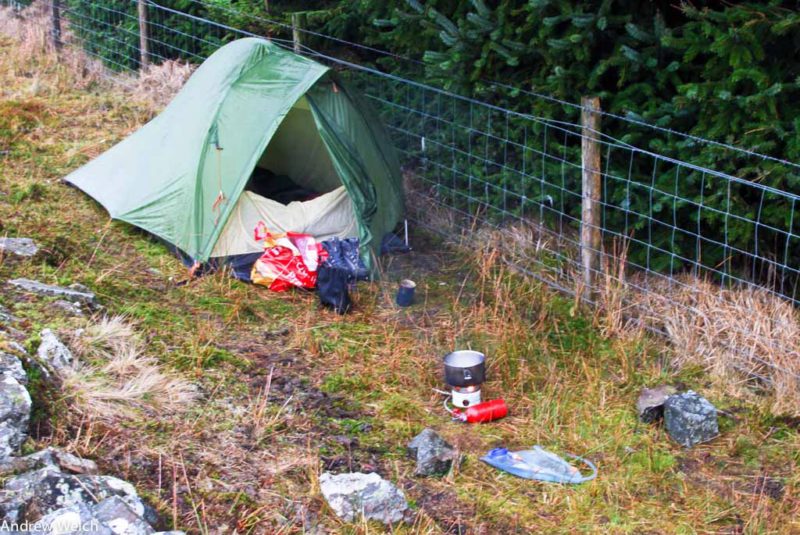 We decided to walk into the forest a bit and then I veered off into the undergrowth pushing my way through and emerging onto a bit of moorland where we pitched the tent in a sheltered spot. The tent went up nicely, with the pegs going into the soft mossy ground. During the night water dripped off the tree noisily onto the tent but it was great to be sleeping outdoors. 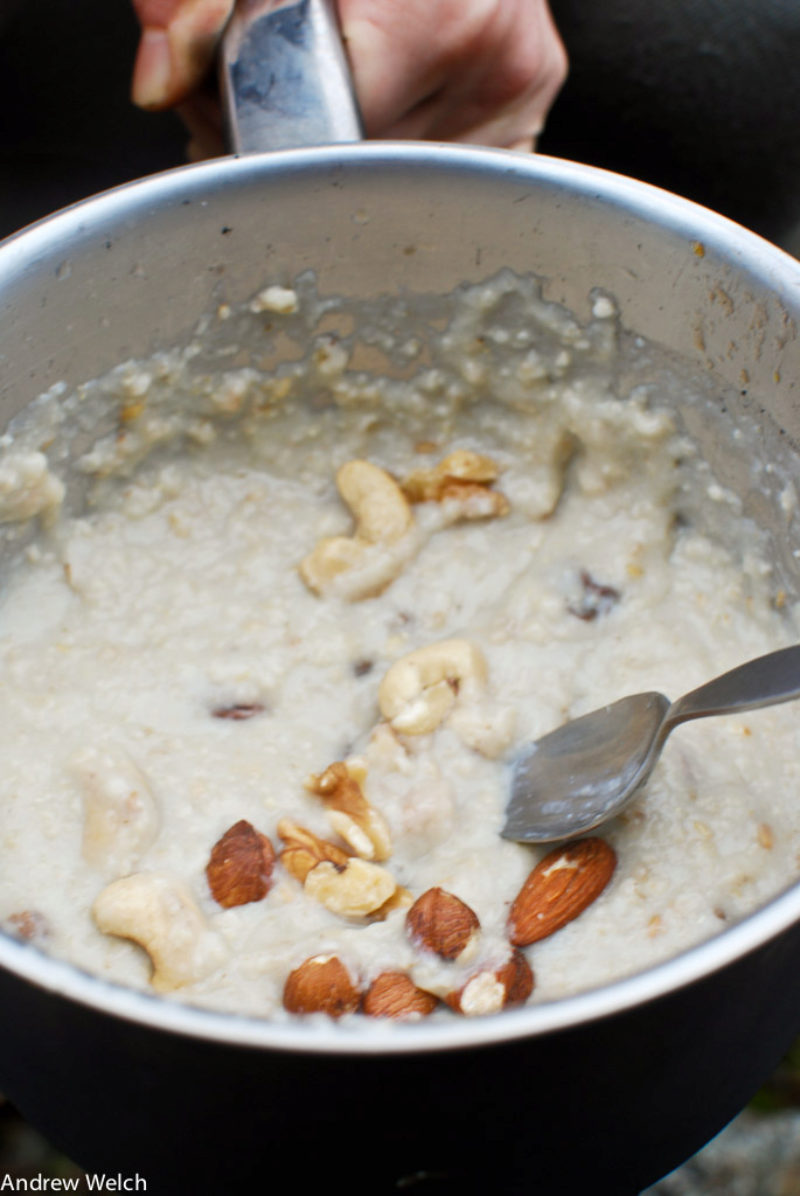 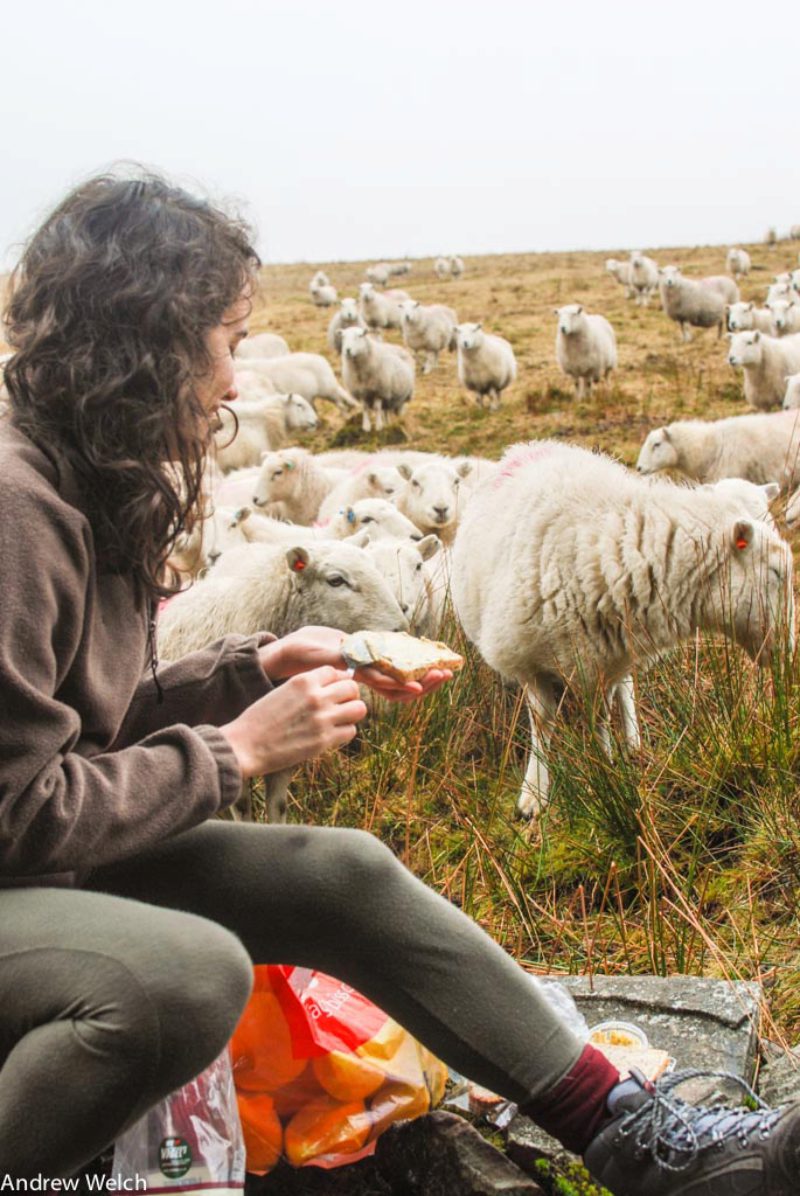 In the morning it was porridge with extra nuts, cooked over the stove whilst the sheep came over to investigate hoping to get fed by the farmer. We packed up the tent, cleaned the groundsheet and continued walking through the forest adjacent to the lake on a fire-road, listening to little waterfalls and the damp forest dripping and rustling.

Unfortunately, the route followed onto the road for a while. We headed towards an area on the map with some waterfalls and the beginning of a trail called Craig y van which led up onto the high ground. We walked along nice and slow and meditatively. I love the process of walking slowly and being aware of all of my movements and then turning and looking at the mist covered landscape and then continuing with my meditation. 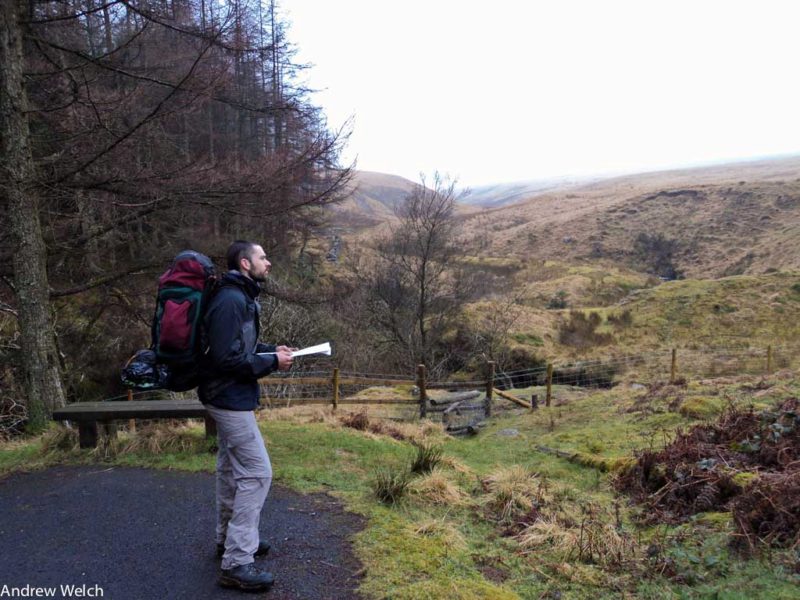 On the top of the hill, the temperature dropped, and we were up in the mist. We followed a rocky path next to a steep drop on one side and on the other peaty, boggy moorland which reminded me of the Yorkshire moors. We didn’t have much of a plan other than to walk. My pack was quite heavy with all the stuff in although it was quite bearable. Occasionally the mist would clear and reveal a stunning valley beside the path. It felt cold and remote and there is a feeling of humbleness and fragility that comes with that kind of environment. 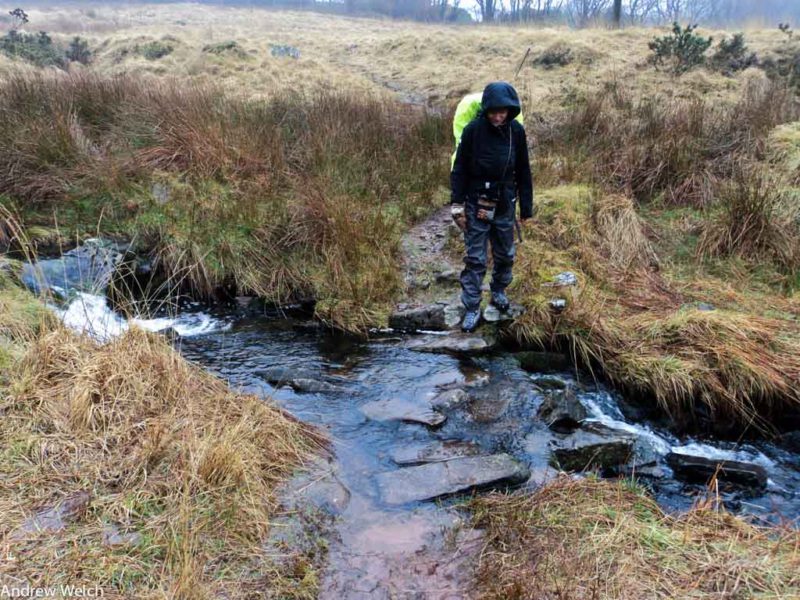 We descended down to the Neuadd reservoir it was satisfying to return to a slightly different ecology. The view was made of straw-coloured grass, dark green conifer trees, and the mysterious looking lake, accompanying lodge and surrounding shrubs and vegetation all shrouded in mist. It was the first time I had been in that kind of open landscape since travelling in Mongolia and it was nice to be back in the wild. The Neaudd reservoir is privately owned and used for fishing. It was strange for me, living in Georgia, that a lake could be restricted from use as it just wasn’t the case there. Any lake could be swam in and you could camp anywhere within reason.

We found a nice camp spot beside the far end of the lake and found a secluded spot. There was a guy walking around with a flashlight before we bedded down for the evening, but he didn’t seem to see us although he did flash the light directly at us quite a lot. It made for a little exciting moment of anticipation whether we would be found.

The following days walk took us down the other side of the reservoir in the forest following beside a river which tumbled through the valley. We walked on a rocky and boggy path amidst soaked greenery and moss-covered trees before stopping to make a ginger tea and eat some nuts and dried apricots. The track took us back down to the road where we then walked to a bridge which took us over to the other side of the reservoir.

I could hear the noise of the Brecon Beacons steam engine and horn sounding which was incredible in the mist. The next part of the walk took us along some winding footpaths up a lovely track passing through an area of old growth forest covered in lovely bright green moss and the trees joined over the path to form a tunnel. It felt like real ‘Lord of the rings’ territory. The path crossed a fire-track which was not on the map, but we followed it anyway and walked through a rather depressing burnt out around of black tree stumps before going back into the forest, and catching the train passing again. 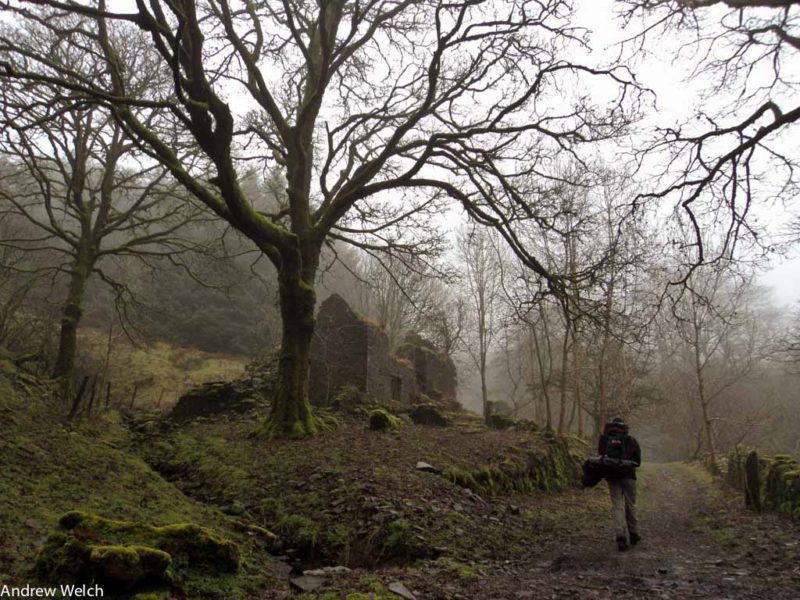 After getting lost briefly and wandering into a farmyard we found our way onto a road which led us back to the original dam and to the train station for the railway. It was getting late and I considered places to sleep; in the forest, next to the reservoir visitor centre, on the moor, but we decided to head to the pub for warmth and to involve some others in the process.

The pub ‘The Red Cow Inn’ was lovely. I had a nice pint of ale and chatted to some of the locals who started talking about London and prisons. We were given permission to camp on the playing field in the village, so I pitched the tent and we returned for some pub games, sandwiches and an open fire. 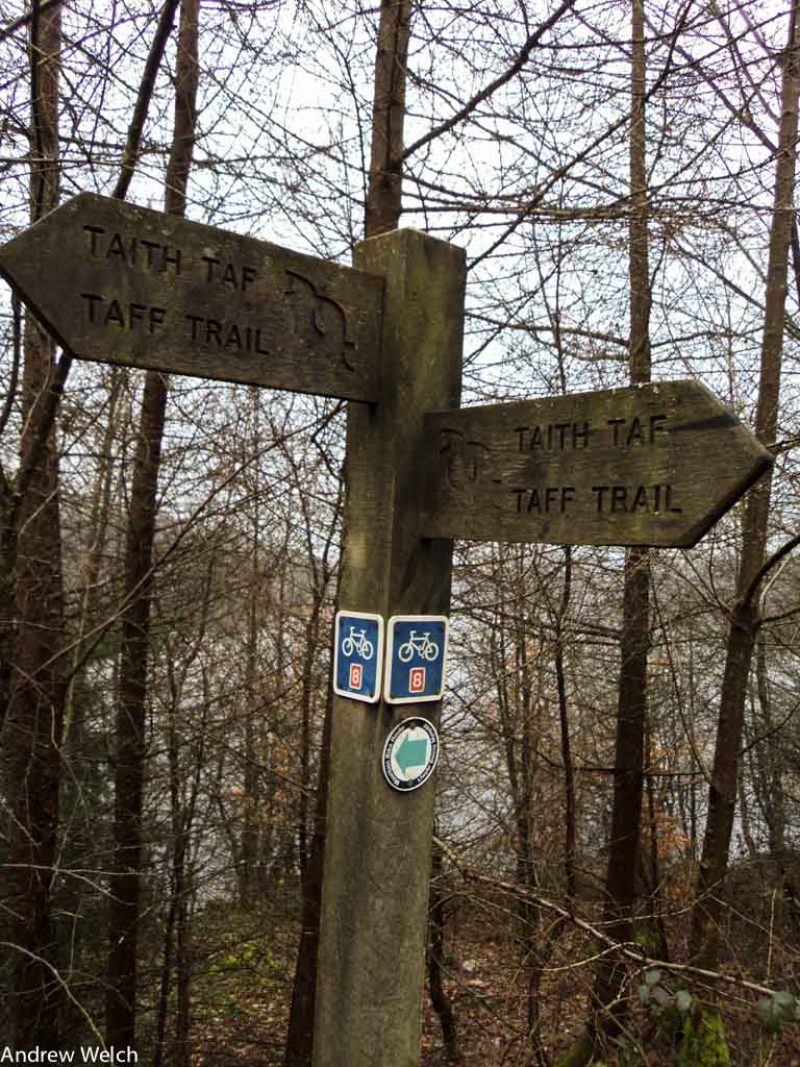 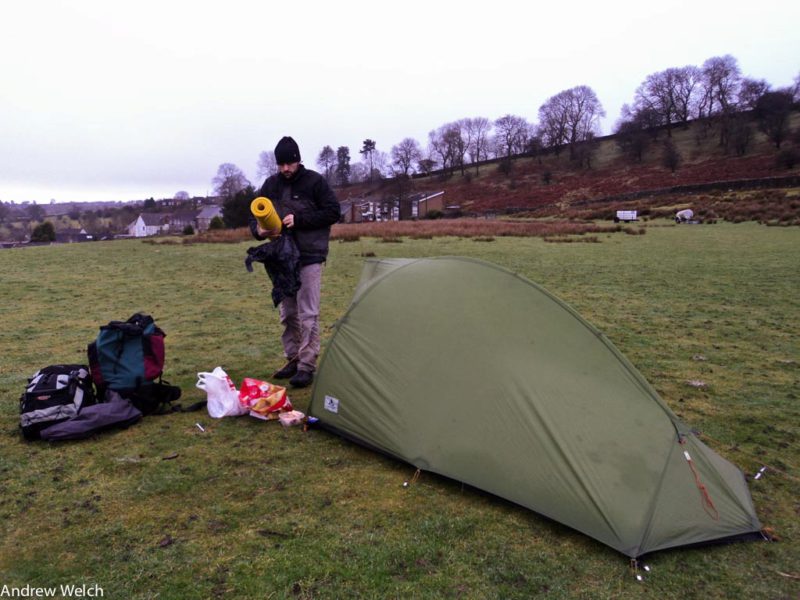 Our bus back was the following day in the evening so after getting a good night sleep we walked back down the Taff Trail into the town of Merthyr. It was good to see the transition slowly of the different altitudes and rural to urban landscape. We caught the bus back to Cardiff and then over to Newport. It was surprising the difference between Merthyr and Newport. In Merthyr people looked youthful and happy and in Newport people looked rough.

Before catching the bus in the evening, we wandered about the streets and watched the activities of the youth of Newport; a group of teenagers were doing backflips off a memorial and a bin practicing their Parkour. Another group were drinking, and smoking and various cars went through with loud music playing.

Later on, we saw groups of short skirt clad girls in high heels running about going out on the town. It reminded me of my local town of Kettering on a Friday night. We ate sandwiches and caught the bus back to Victoria. It had been a good, if short trip.

Back in my flat it felt really good to have got fresh air and tested my body in a different way to cycling and leaving London had given me a fresh perspective on the city on my return.

(reedited from the archive, originally written 2011)