Tom and I headed from Moron, where we had taken some days off to rest, to Hatgal which is a town on the Southern tip of lake Hovsgol. We had grown sick of pedalling across the steppe and were in search of a change of scenary. We met two Finnish and an Australian cyclist and we joined them in the evening for a meal of fresh Yak over the stove in the ger.

Earlier in the day, on approach to the lake, we had seen that the river was covered in ice. It was strange because the last few weeks I was used to being blasted with hot sun. Snow was still visible in places. The lake was frozen and would remain so well into July. 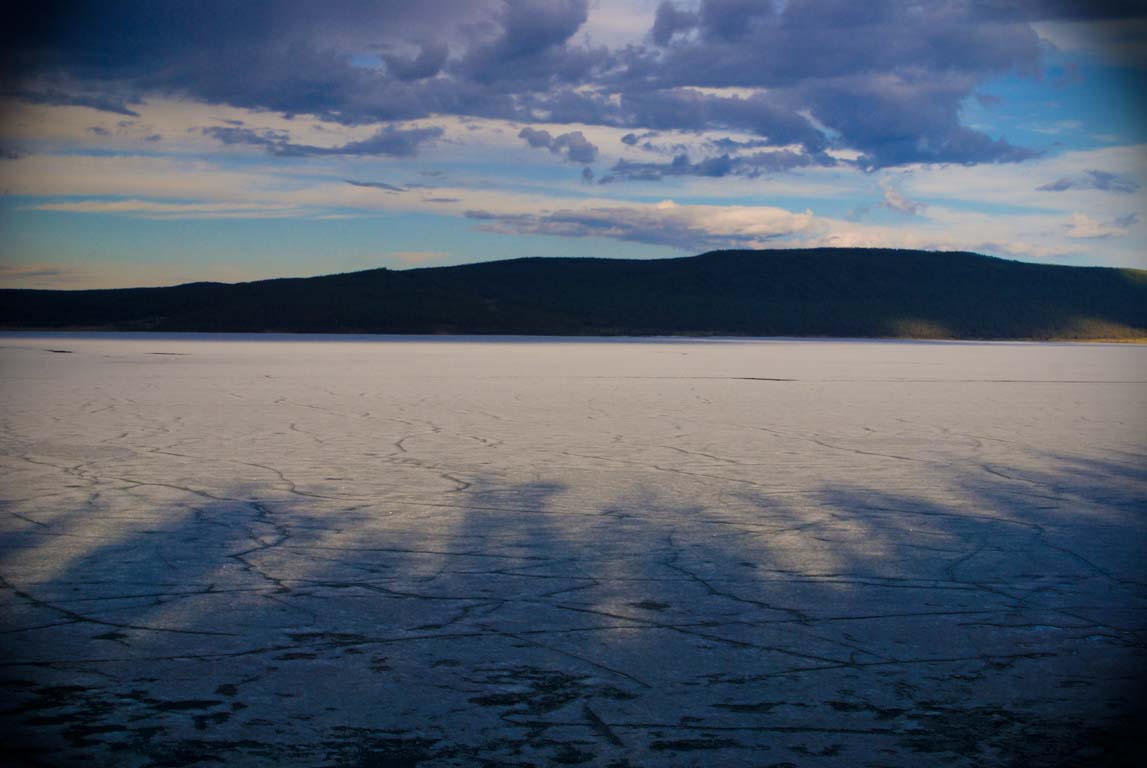 The following day we left Hatgal to follow the west side of the lake along a singletrack route with many hills. Our cycling friends had been along there the previous day and reported: ‘great singletrack with a number of unrideable sections which involved pushing the bikes up impossibly steep climbs’ (and this was without luggage). Tom and I immediately knew we had to take that route. 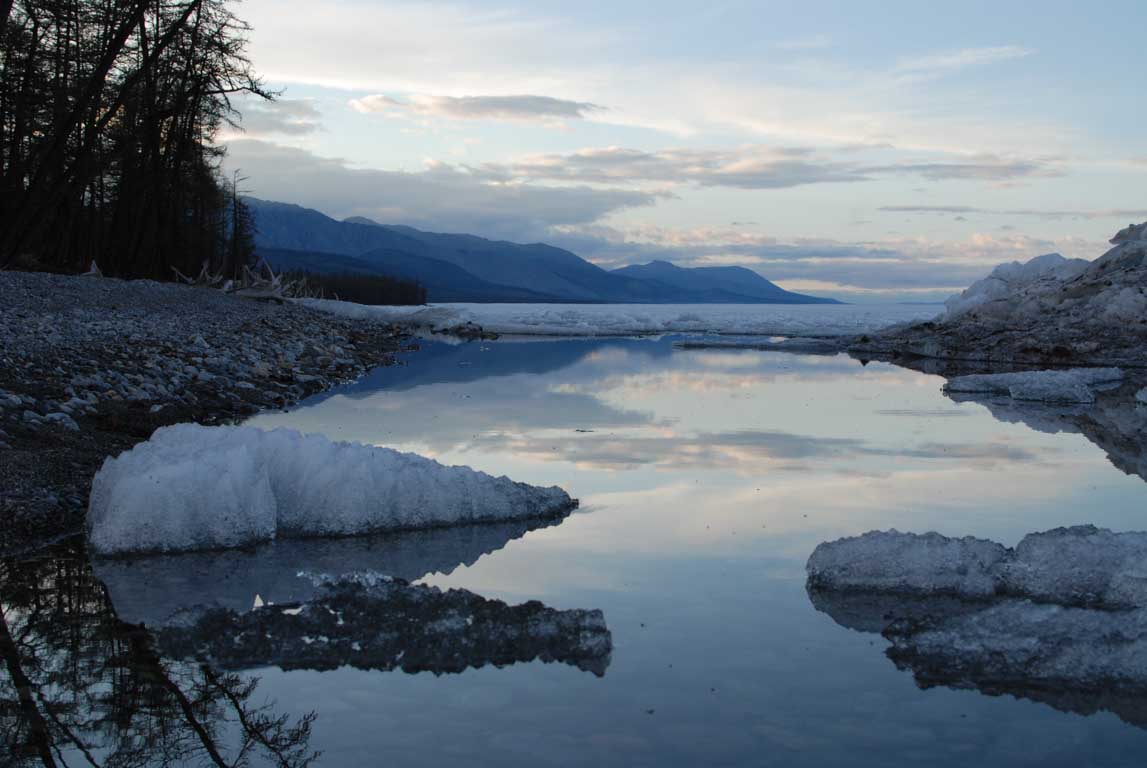 The attraction of plunging ourselves into the frozen lake was irresistible. We found an amazing campsite, built a huge fire on the beach and took turns to wade in, swim around frantically, and tear back out, stumbling over the slimey rocks. 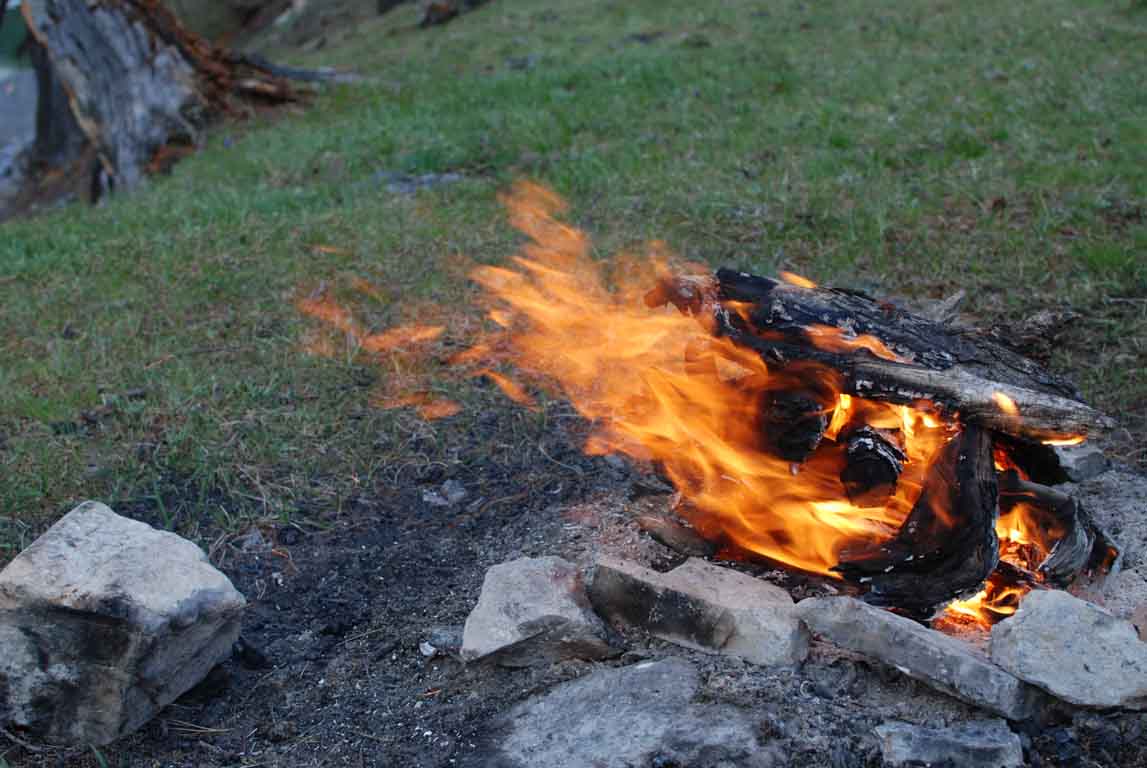 I had never experienced such cold water before. It felt like my feet were turning to ice immediately as they came into contact with the water. I threw myself beside the fire. The steam rose as my skin turned red subjected to the extreme differences in temperature.

We continued along the lake for the next few days. The track turned from singletrack to riverbed to peatbog. It was at times challenging to force the bike through whatever we came up against but the resulting satisfaction was immense. 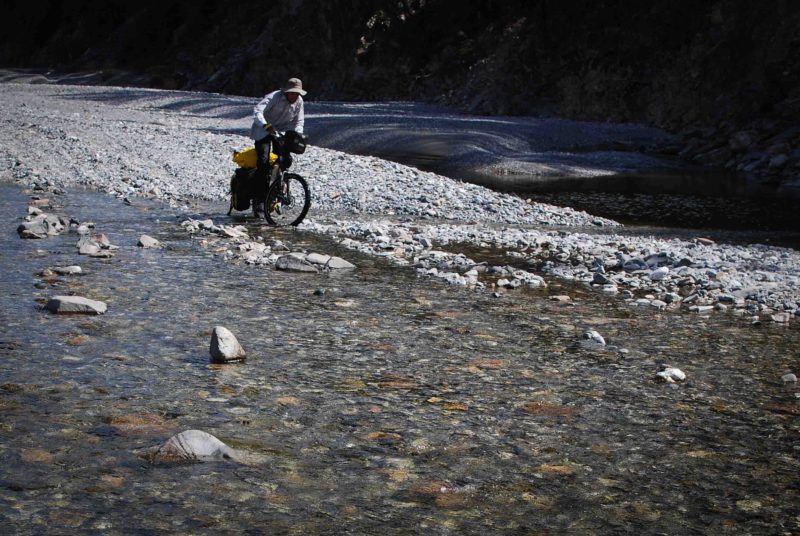 The last couple of weeks have been some of the most rewarding cycling / pushing / walking that I’ve done. A lesson learnt from this trip, applicable to all the travel I’ve done is to make sure that the experiences continue to be different, varied and above all fun. If that involves disregarding an ‘ideal’ plan to do something else if it promises to make things more interesting, so be it. For example, we decided to ditch the idea of riding across yet more steppe in favour of exploring much wilder routes in the mountainous forested regions in the north. There was no point doing more of the same when there was the chance to do something more challenging and satisfying.

From the lake we headed west for a settlement called Renchinhumbe. The track on the GPS didn’t correspond to the track in reality which was something we had become used to. The GPS decided the track was a 1km south from us. Nevertheless we followed ‘a route’ with some signs of having been recently travelled.

We pedalled through forest and climbed on rocky doubletrack to a frozen river. We pushed the bikes across the snow and ice. The snow was melting and the water which was flowing beneath carved out interesting shapes and channels in the ice and snow. 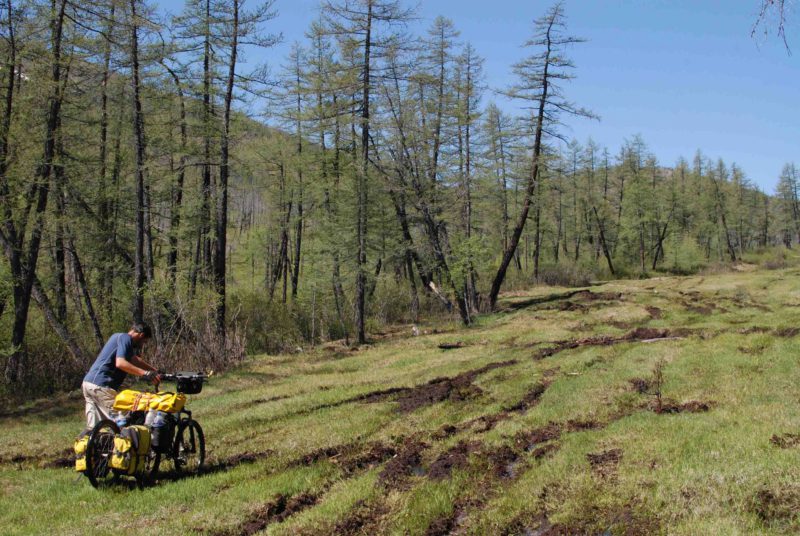 A couple of Mongolians on horseback passed us as we reached a very boggy area of grassland. We pushed the bikes here for around 3 kms to the mountain pass. It was impossible to rest as we were descended upon by huge swarms of mosquitoes. Luckily, they preferred Tom’s blood to mine. I didn’t get bitten once. However, Tom was bitten a number of times including on the back of one of his knees which he told me was irritating him whilst cycling.

Thus followed the most disappointing downhill of all time. We pushed the bikes downhill through yet more bog. The track took us to a wide dry riverbed about half a kilometre across. A small channel of water passed on the nearside. The water provided delightful respite from the hot sun and washed away some of the dirt and sweat.

TODO: Getting up speed first didn’t always work out

According to the map the track was supposed to follow beside the river. We knew that the river would lead us in the direction of the settlement so we decided to follow it along the riverbed. It was possible to push our bikes at other times, where possible, ride across swathes of boulders and sand.

We crossed the rivers where necessary. Each one filled my waterproof boots but wading through was immensely fun. The bikes stood up to the punishment very admirably.

We are now in Moron after catching a bus from Renchinhumbe. We are making tracks back to Ulaan Baatar and out of Mongolia back into Russia. The icing on the cake of this brilliant adventure was crashing a party in the middle of nowhere. 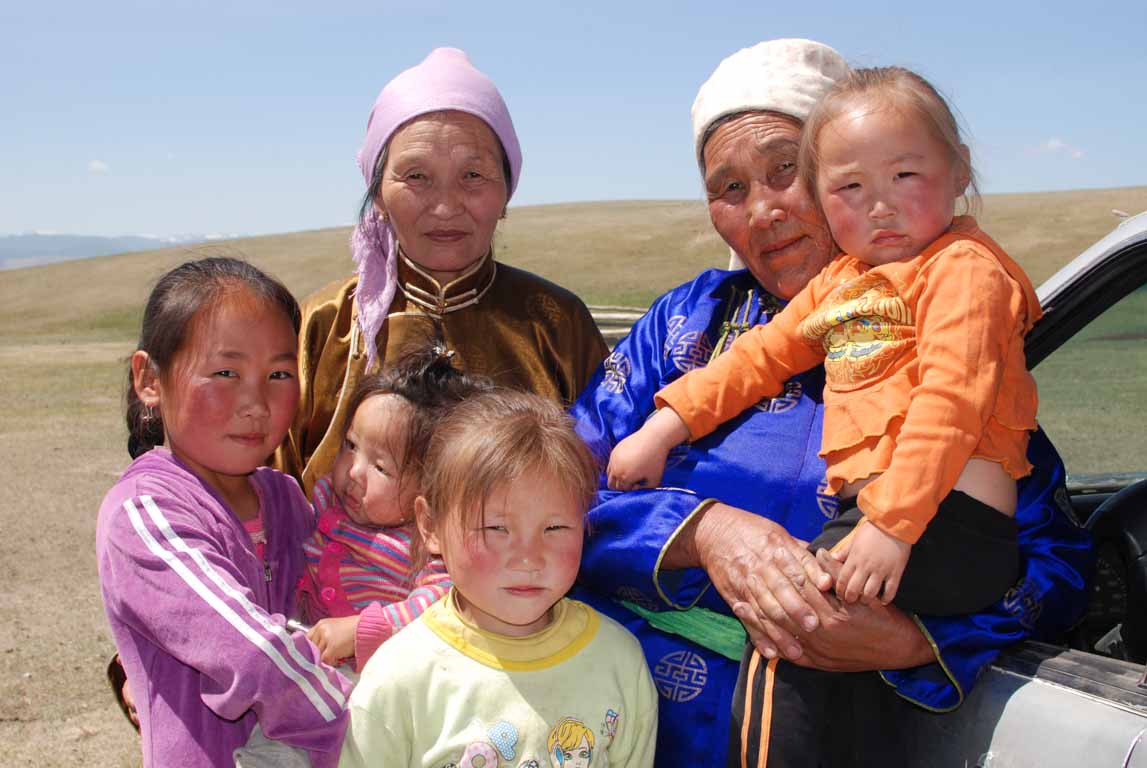 Tom and I had no idea what the party was in aid of, but there were noodles, sweets, lots of vodka, games of football and volleyball. It was a superb ending to this section of the trip. 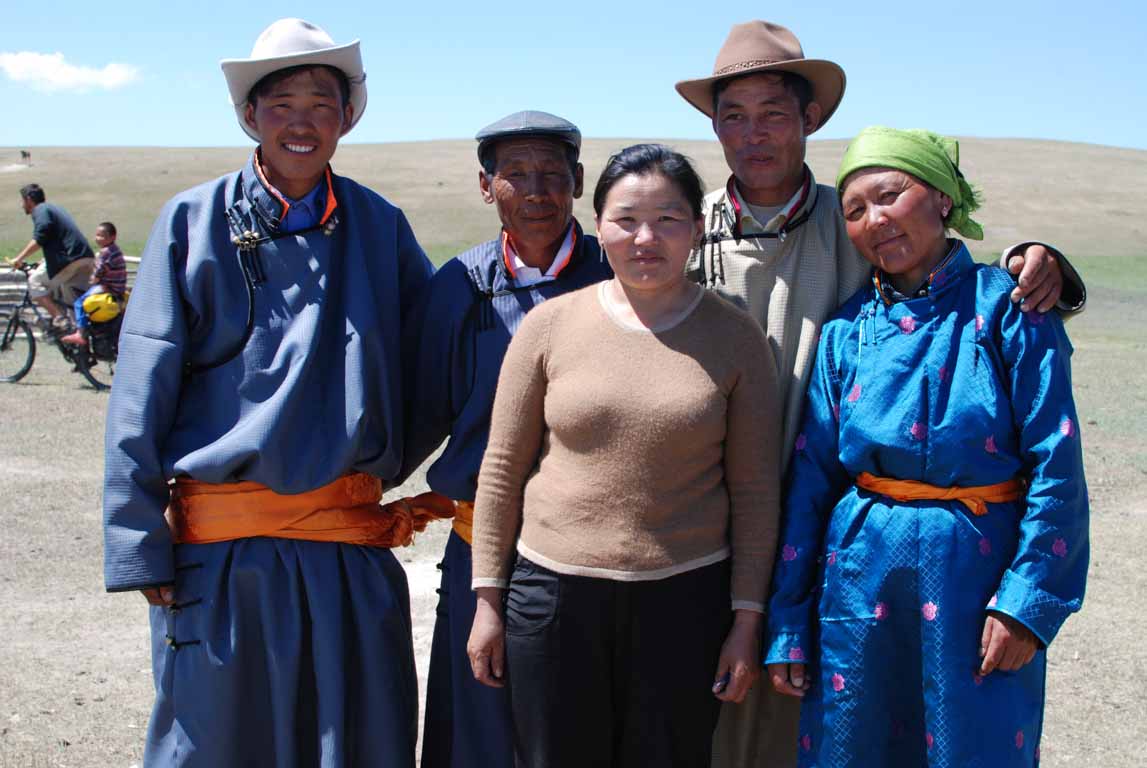 TODO: A party in the middle of nowhere with noodles and vodka