The first few days in Romania were mentally tough. We donned full wet weather gear and ventured onwards. It was overcast, drizzly, cold and miserable. The road away from the border was full of lorries, one after the other, spraying bucket-sized quantities of water over us. In the morning, we cooked a huge meal at a bus stop and washed pots in a puddle next to bemused-looking people waiting for a bus. 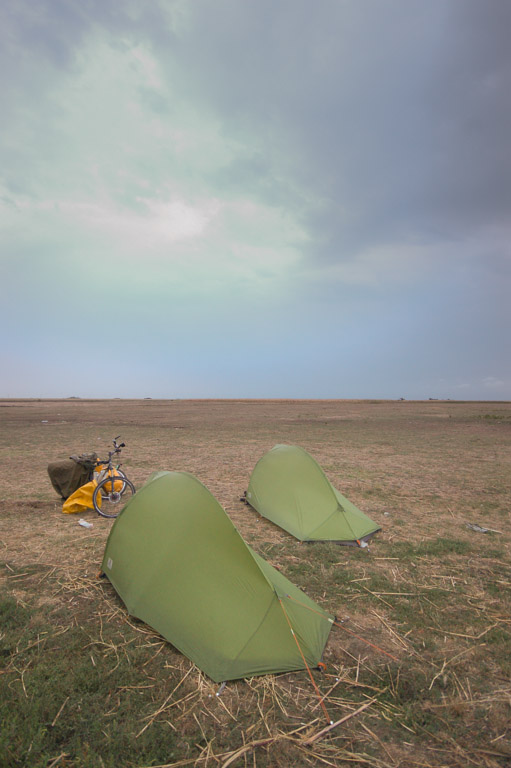 The geography was flat and featureless, the weather unforgiving. However, it was culturally and visually different, which kept me intrigued. I could often see a shepherd with a herd of sheep and dog by his side drifting across the land, a horse and cart drive past or small farmstead that looked like it was from hundreds of years back in time.

Workmen moped about around half-finished building projects. Bleak industrial yards chugged and ground away as we cycled past. I felt like I was in a George Orwell book or a David Lynch film.

Our bikes and luggage frequently attracted looks of complete disbelief from car and lorry drivers and people we passed. It was difficult to find good campsites in wide-open spaces of flat farmland and plains with little shelter. We resorted to staying the night in a cheap motel, where we took the opportunity to wind down after the stressful border crossing, wash ourselves and clothes and do some guerrilla cooking with the MSR. We treated ourselves to a spicy curry and some well-deserved beers, which had markedly dropped in price since Western Europe, as an added bonus.

Refreshed, we were eager to put some miles in with the stubborn weather giving us no reason to hang around and the beckoning of the distant hills. I had little idea of what to expect of Romanian culture, but I was starting to get a taste. 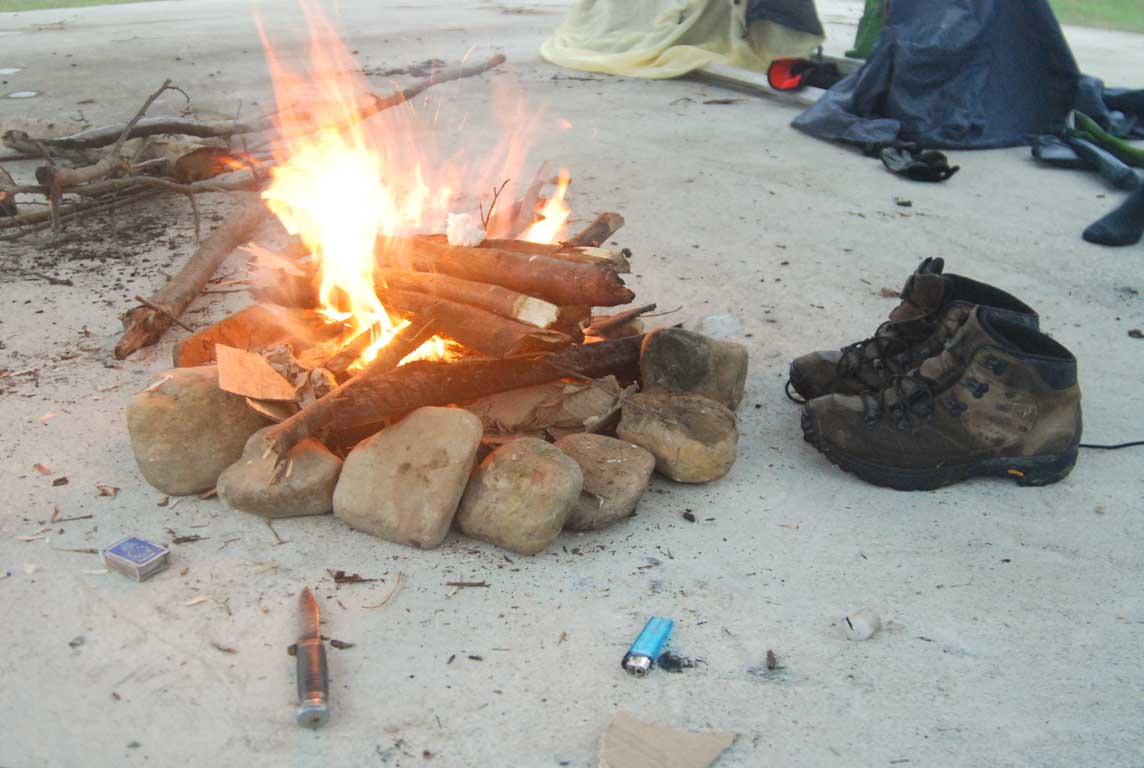 Villages would have a mixture of buildings in various stages of construction and random pieces of wood cobbled together for farm outbuildings. Usually, the houses were fronted by a gate from which, an old lady or man would be looking out upon the world, moving by or selling some of her vegetable produce. 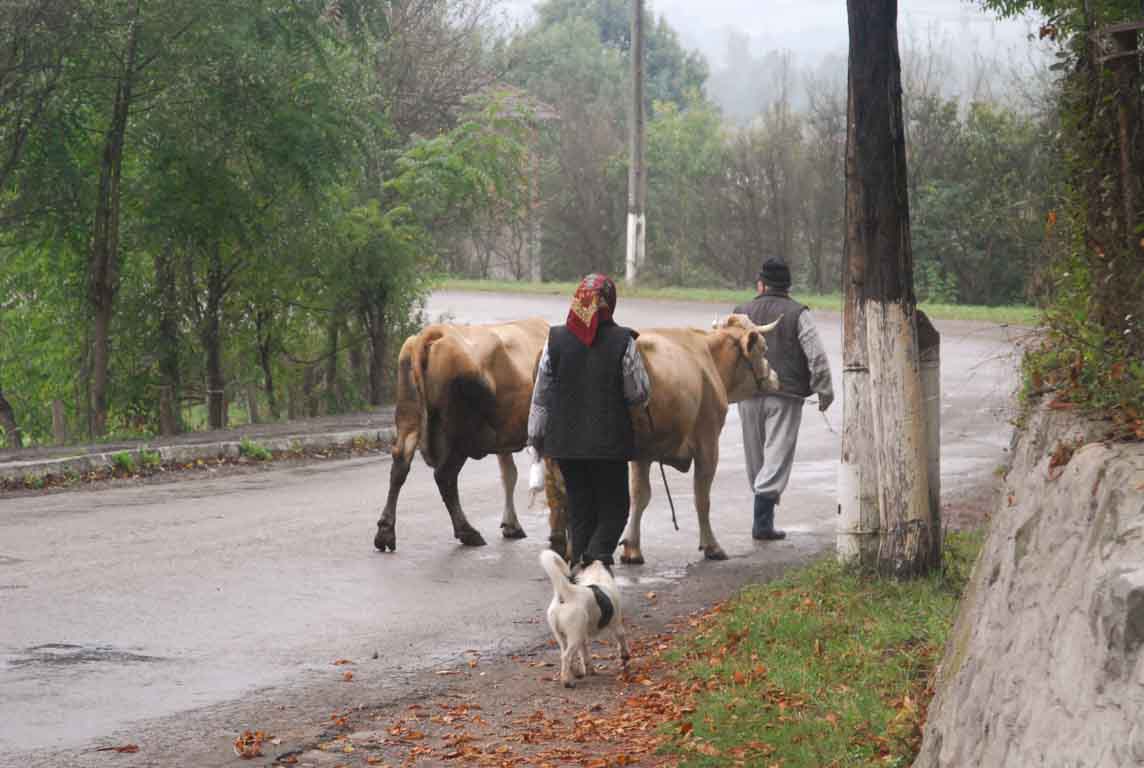 By the side of the roads, domesticated animals were often wandering about, seemingly without an owner. Hens, geese, goats, cows, horses, all grazing the grass under the shade of apple and plum trees lining the roads.

We made good progress and cycled into progressively hillier terrain, with a plan in mind of visiting a thermal bath in the mountains. However, the rain closed in on us again and we were enamoured to once again try to ignore the weather by pressing on.

We followed a road, which, from the map, looked like it would be tarmac. However, we soon found out that in the Romanian mountains this particular type of road, actually meant a fist-sized-rock-covered, heavily rut-filled, dirt track. Equipped with our Kona Explosif mountain bikes, Tom and I were enjoying the challenge of the terrain, our Extrawheel trailers tracking along behind us. 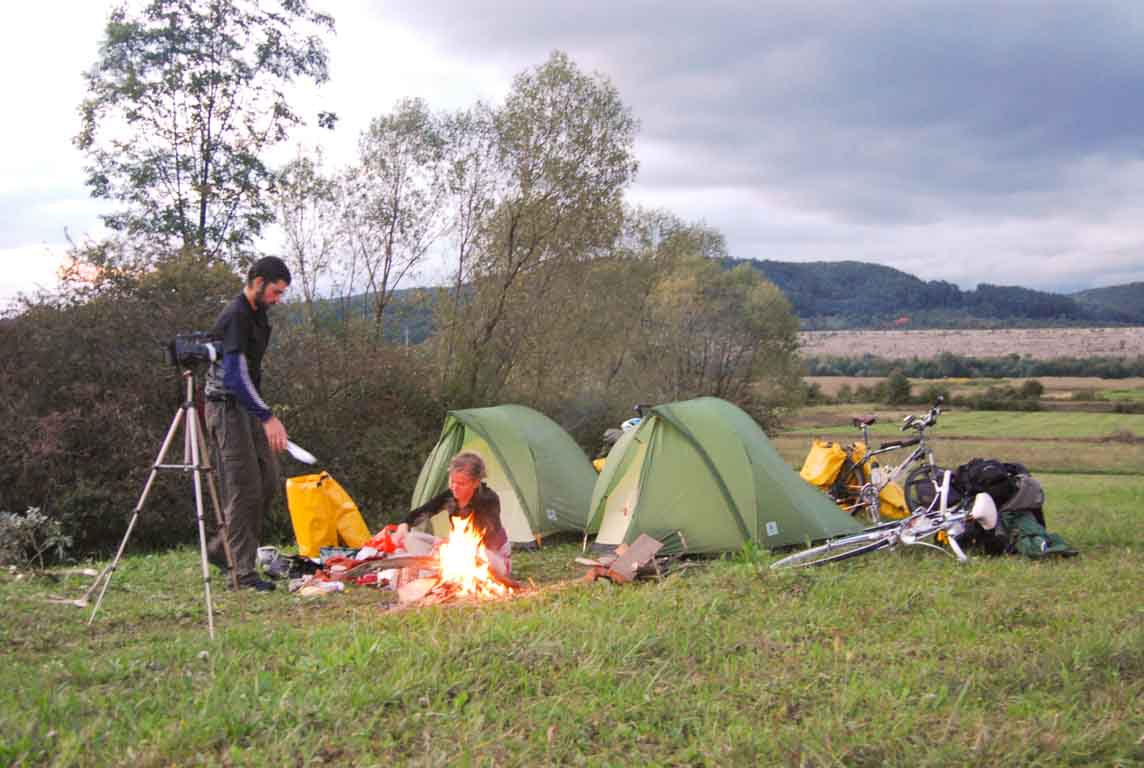 I could barely believe that Maria, on her 25-year-old racing-tourer-hybrid managed to cycle at all. However, she possesses an ability to kind of float over anything, I have come to discover. With barely any brakes at all on wet rims, she often resorted to white knuckle, freewheel, downhills using wet thorny bushes and shoe-floor interfaces to slow down.

In one particular instance Maria had been filming Tom and me. She then followed us down the downhill. We waited at the bottom to see her come speeding, like a wailing banshee, directly toward us, shouting “I can’t stop, I have no brakes,” to which Tom and I shouted frantically “use the bush,” pointing off the track, hoping to avoid being included in a collision which would result in a tangled pile of bikes. Luckily, Maria landed perfectly square in the bush, emerging with a big smile on her face and fits of giggles, and much hilarity was had by all.

That day was hard, and we all were soaked to the skin. However, news emerged that the weather was to improve on the weekend we planned to head into the mountains. Magalie re-joined us, taking a train from the UK to meet us in Sebes - a grey place with one large road through the middle.

After cycling 50km off-road in the wet and cold, a random stranger at a petrol station offered us accommodation. We followed him to his house in the outskirts of the town in a rundown part of the neighbourhood. We were taken in, given hot coffee, fed and a bed for the night. The next day we were offered showers and washing clothing. This didn’t materialise initially, but then the girls headed off to the house belonging to the mother of the wife in order to shower and do their laundry.

While they were gone, Tom and I were left with the host. He beckoned us to sit down with him at the table and produced a piece of paper, which he started scribbling down various numbers and additions. Complaining that he had no job and money to buy food, he signalled hunger by running his hand across his stomach. He asked us for the sum of 200 Euros for our stay at the house. I initially felt angry that we had been asked for money after believing we were being looked after through generosity and kindness between human beings. We hadn’t been told we would need to pay.

We explained firmly and calmly that we had a very small budget for our trip. We gave him money for food and quickly left. In retrospect, I don’t blame the guy for trying. We had expensive bikes and cameras. We may well have had money to throw away. It was a one-off occurrence.

We were glad to leave and head once again into the mountains. We picked up some secondhand clothes from a charity shop, which was having a sale. Every item was the equivalent of around 30p. The mountains immersed us in a sense of calm and security. That night we were invited into a villager’s home and, in the morning, fed freshly picked, deep fried, battered wild mushrooms. 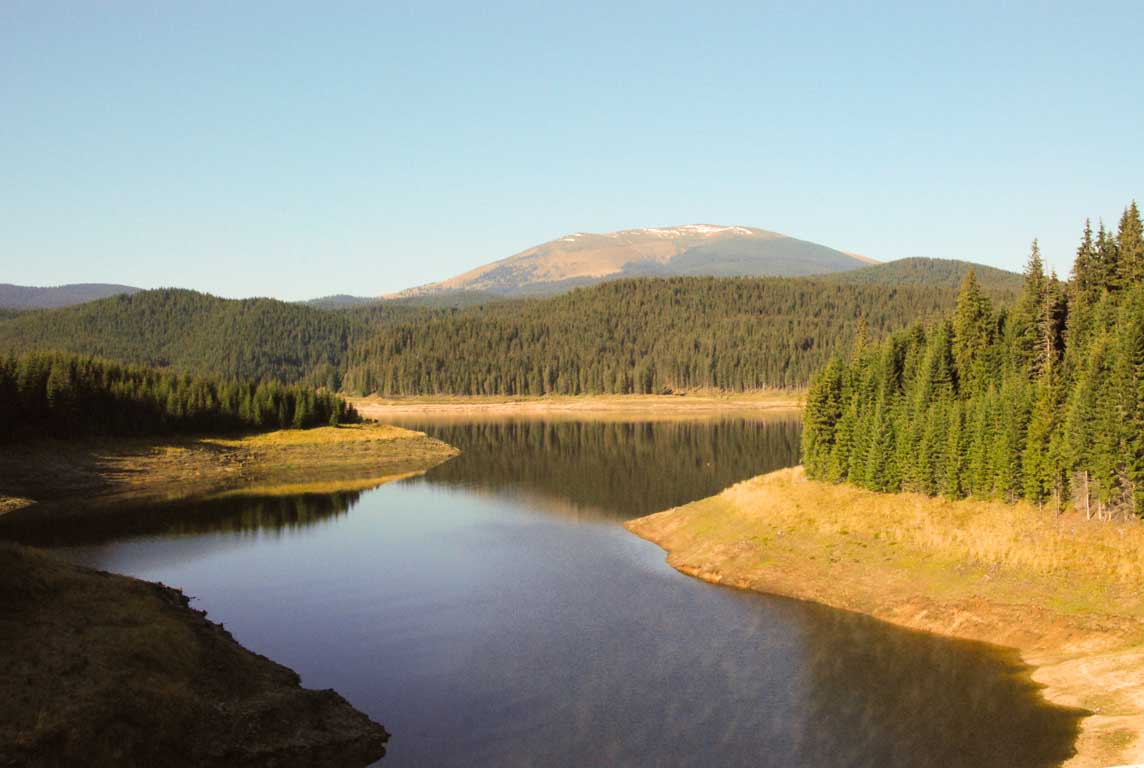 Crossing the mountains, the beauty and wildness of the countryside exceeded my expectations. The road degraded into rough dirt track. There were only a few cars and regular logging lorries stacked up with freshly felled timber. We noticed a number of logged areas, which were the only eyesores on otherwise beautiful areas of untouched forest. We ascended to 1700m. The downhills on the other side were breath taking, winding through forest-covered valleys in glorious sunshine.

We met a farm manager and his wife who we stayed with in Pitesti. The farm happened to grow grapes, so there was plenty of the local alcohol flowing, and we ate a traditional Romanian dish which consisted of, I must admit, a variety of different types of meat. We exchanged stories and began to get a little more insight into life in Romania. 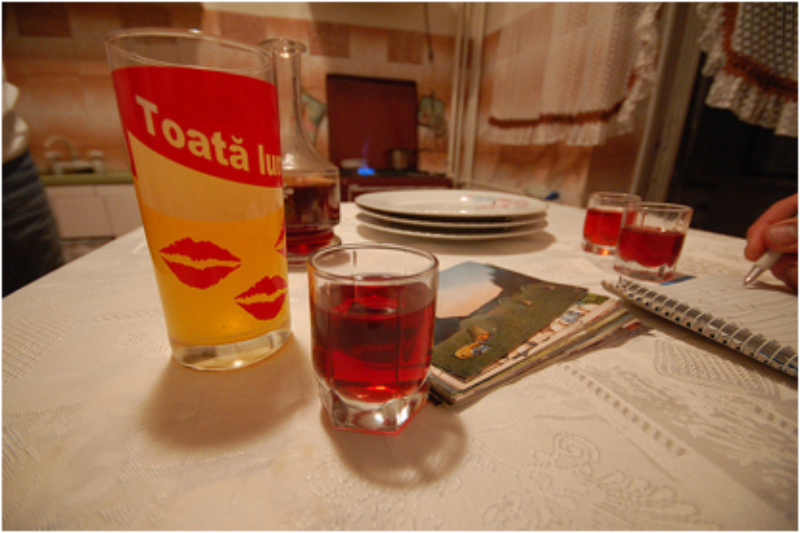 The following day we cycled 101km into Bucharest, making it our longest day so far. We slept in the airport that night, feigning that we were going to fly out the next day. In the morning, the security guards looked on confusedly as we removed our luggage from the trolley and reassembled it on the bikes.

We then visited WWF Romania after cycling through crazy traffic in Bucharest. They are working to educate timber companies that logging can be both profitable and sustainable, if done in the right way. In a situation where a country has a lot of resources available and wants to trade them to drive economic growth in the post-communist era, NGOs like the WWF have a lot of work to do to encourage implementation of sustainable environmental strategies and protect the environment. We also discussed how the traditional community ways of living and farming that still exist in Romania are being helped to be preserved.

Our timing was again impeccable - we arrived in Bucharest on a national holiday of the foundation of the city and the start of European Mobility week. The central main road was closed off and many cyclists, rollerbladers and other motorised modes of transport could be seen using it. We used Couchsurfing.com to find a place to stay, and are stopping with Radu, an environmental science student who has been a fantastic host. 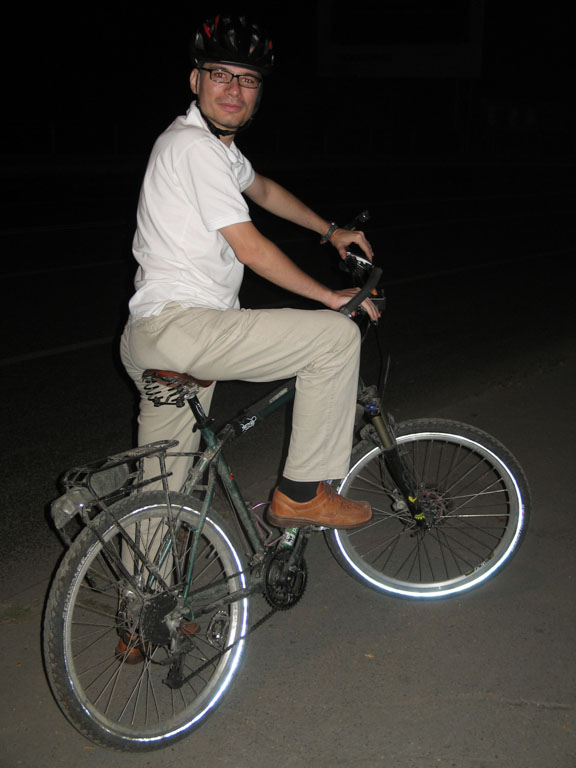 He showed us around the city and helped us to sort all our administration out. We have also stayed with another Couchsurfer called Alex, who is a professional violinist. We are looking forward immensely to watching him in concert tomorrow in the mountains.

The lifestyle is offering an incredible experience at the moment. I am really looking forward to seeing Istanbul in a few weeks. It is in the back of my mind that the weather will be growing colder. However, we have extra clothes, and we can choose to head south more quickly if we can pick up visas in Istanbul instead of Ankara. 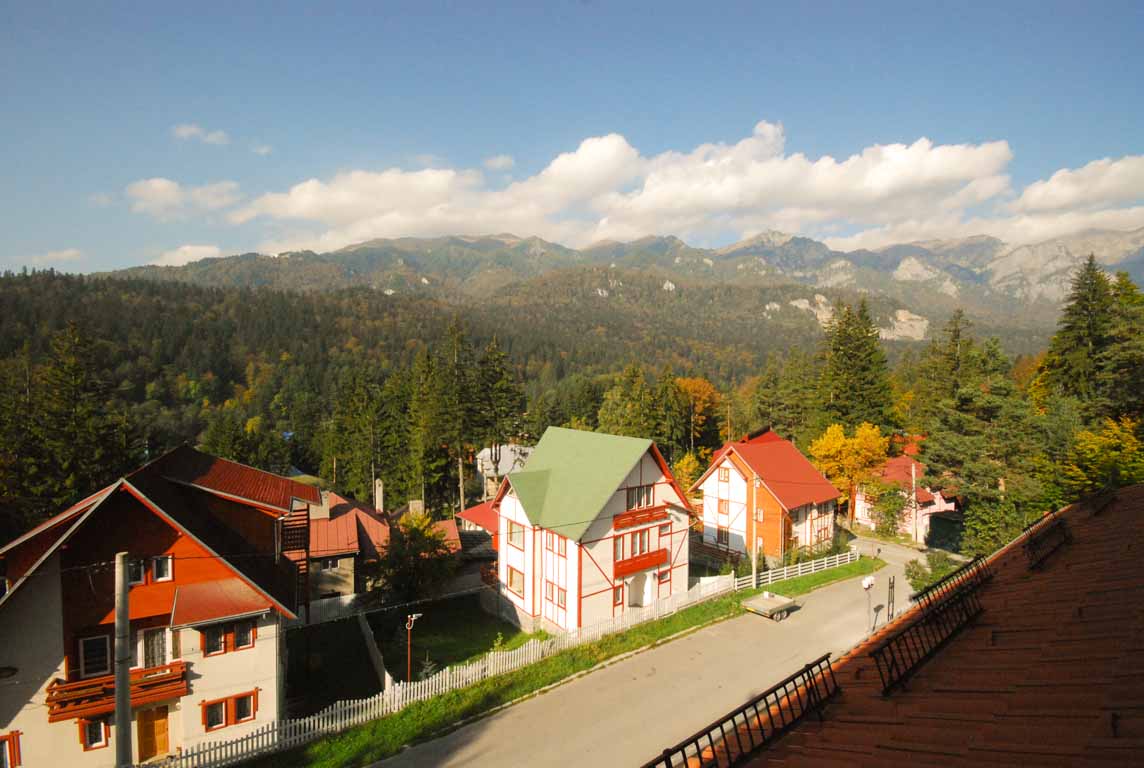 Please tune into the podcast, and if you have some spare cash lying around, why not donate it to our supported charity, The Wilderness Foundation, using the link on the top right of the front page.