A couple of workshops at a space in New Cross.

migrated from the WeQuest Research blog:

I was preparing the Hart Lane studios space with Rebecca for the Why Make workshop and a guy came in and said he was looking for the person who ran the space because he wanted to help his friend put on a workshop for local residents in New Cross to make their own solar panels.

His friend had the required knowledge to run the workshop, and could source the necessary materials. I found it to be quite serendipitous because I had been using this scenario in my mock up app. It was interesting to see how with Rebecca and I preparing the space for our workshop, it meant that others could come and have a look and were made aware that something was happening. Natural curiosity and desire became apparent as others also turned up during the actual workshop to enquire whether it was a regular event and how they could get involved.

Rebecca Steiner and I held a workshop, originally an idea of Rebeccas, to explore ‘thinking through making’.

We walked around Deptford putting up posters to invite people to the event which was held in Hart Lane Studios, an ‘occupied space’ in New Cross.

For me this was an excellent example of the kind of action that already happens, but could perhaps be encouraged, and augmented with the app. I was amused when, whilst Rebecca and I were preparing the space, a passerby wandered in and said that he wanted to hold a workshop in the space about how to build your own solar panels which was a scenario that I was working through in my ‘mocked app’. The idea of bringing an online tutorial like those you have on ‘instructibles’ into a physical context and turning it into a group learning activity seemed like a natural progression when looking at the screen and following online tutorials really lost its appeal.

The space is an old garage, which has now been gutted and fixed up with running water, tea, and biscuits and white washed walls. We created some signboards and wrote ‘WHY MAKE’ in string wrapped around nails into the wall to prepare the space.

The following day around 7 people turned up. We took any materials we could find down to the space, including: string, tape, scissors, wood, metal, cardboard, bamboo poles, garden pea poles, glue, coloured paper, wire and a variety of other things.

Firstly, there was tea to drink and some chatting, then Rebecca introduced proceedings and we went round introducing ourselves. One of the participants, Kai, was a filmmaker and suggested we pass the camera around and film each other and ask the questions.

Then we wrote on the walls, in response to the question ‘why do we make’ and ‘what is making’, which resulted very quickly into a large collective brainstorm sessino.

The next stage was to take one of the ideas from the wall and try to make it physically manifest. I saw it as another way which was to allow the subconsious aspect of the space and process to permeate my making rather than fixate on an idea.

I enjoyed immensely the process of using the materials and working based on what their were capable of doing- e.g. the chicken wire wrapped round bubble wrap as a structure, the bamboo poles stuck into polysterene to create a structure, the paper wrapped and folded as a shell.

I thought it was a fantastic session, and everyone took to it with great enthusiasm, creating some weird and wonderful pieces, including a sculpture with jewellery beads, a miniature model of a rotating city, a boat, a large piece of jewellery, and a musical instrument made from a rotating bicycle wheel. 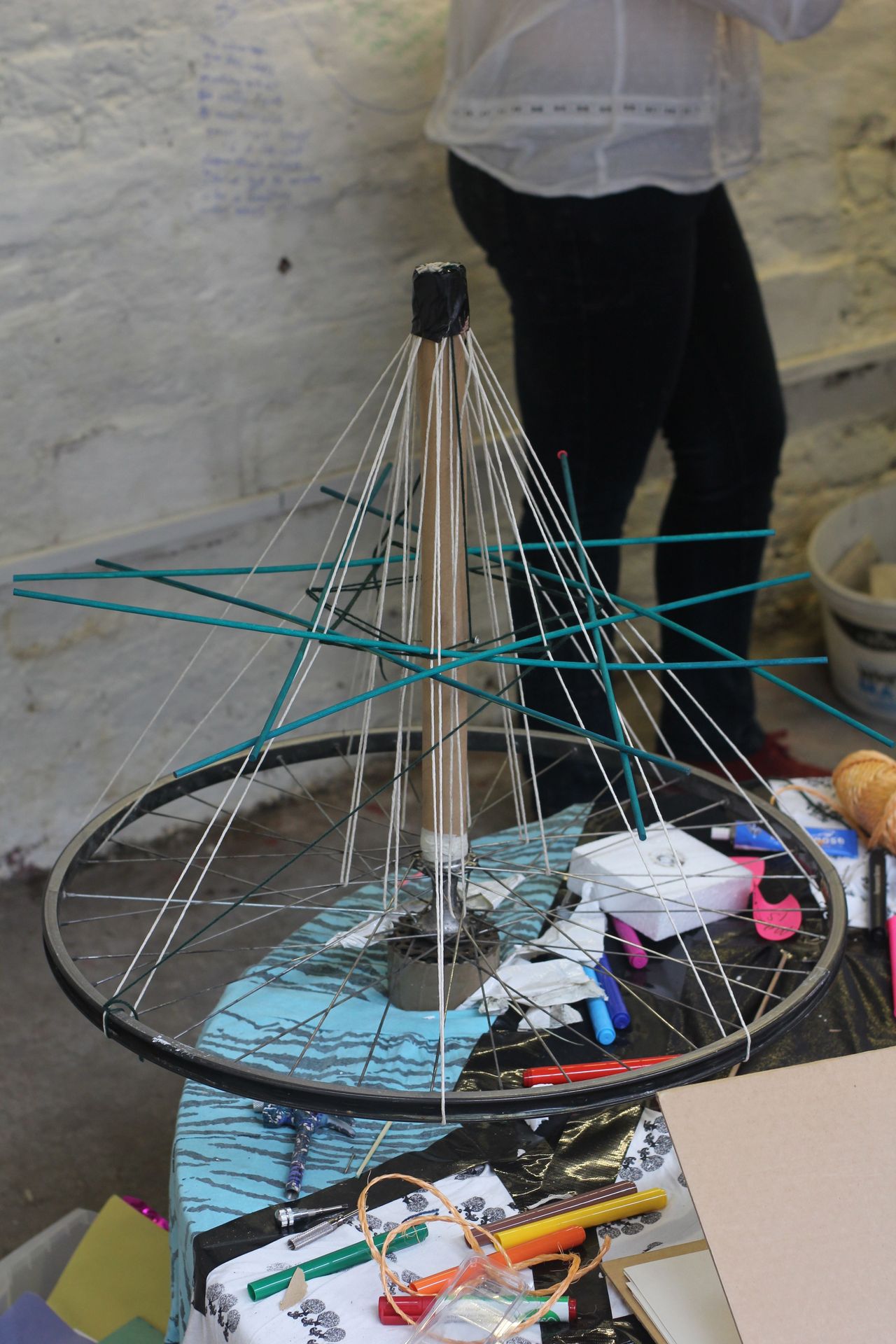