I arrived in Kathmandu, the capital of Nepal, by bus last night. I decided to take the bus so I could see the capital without rushing and not have to backtrack on myself. My plan is to cycle the length of Nepal then drop down into India at the most western border crossing and go on to Delhi.

Nepal holds great intrigue for me because of the mountains and the geographical significance. So far, it seems like a relaxed place. There are a lot of facilities for tourists such as Internet cafes and craft, clothes, trekking and book shops. However, I am hoping to dig a little deeper beyond the surface of the tourist stuff.

A few days ago, on the road in India, I had a street food binge of samosas, fried chillis, Jelebi and endless Chays. I wish I hadn’t because it’s left me with a lingering stomach bug. I’m used to fighting off this sort of thing, it comes with the territory. 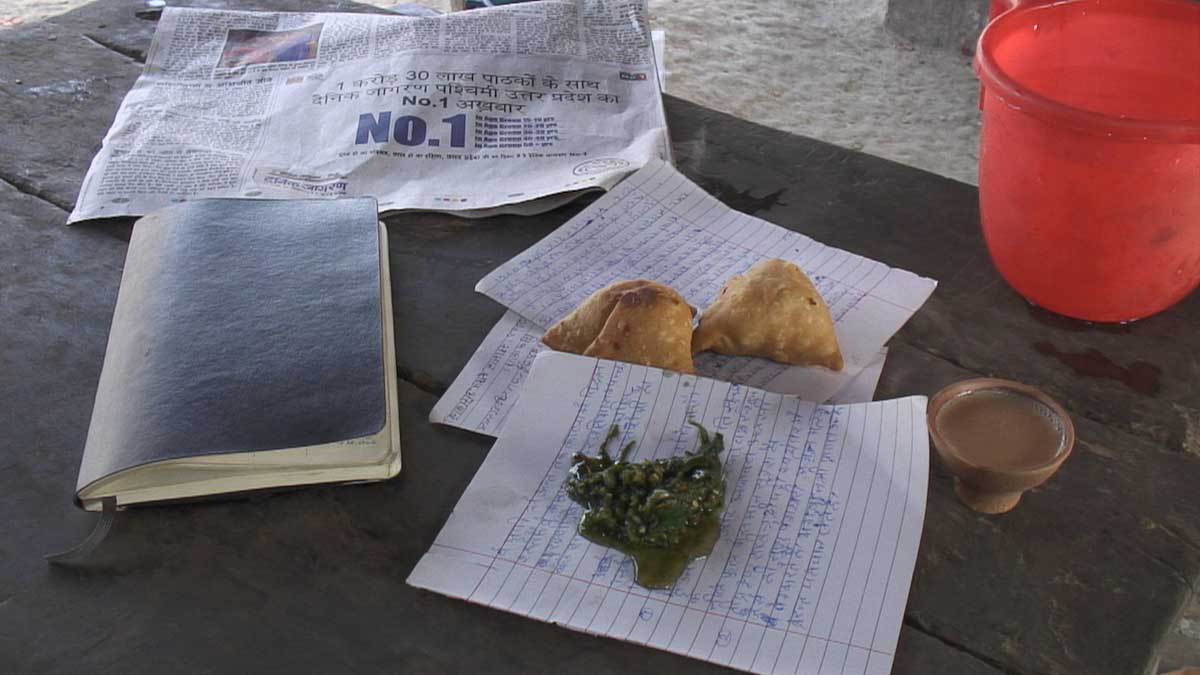 However, it has become very apparent how much my physical state is unavoidably affected by my mental state. Due to my illness, I noticed my mood has gone up and down. The stresses of cycling in a very busy area of India, Uttar Pradesh, had been starting to get to me. I found myself quite miserable, sometimes interpreting the relentless intrigue from locals negatively (when I really could have done with some time alone). 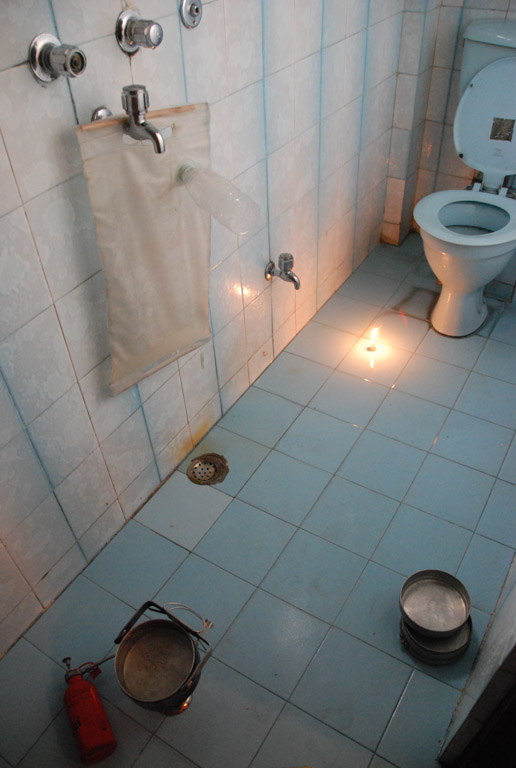 However, the good thing is I am aware of it, and therefore I am (sometimes) able to act to prevent any ‘negative’ actions from being acted out in the real world. For example, this illness has caused me to go into my own shell and be seemingly unable to notice and engage with anything around me. I have been silent when asked my name, country and profession as I just don’t feel like responding.

For me, if I am like this then I’m wasting my existence because positive interactions yield more of the same and cause an ‘upward spiral’ of happiness. I also tend to take more photos, film more, and have more to write about.

On the contrary, negative interaction tend to lead the other way which is not only not very nice but also could be dangerous. I think this process is a lengthy one to learn but, in the long run, it is an important lesson to be learnt. I recall a quote I read on Alastair Humphrey’s website about ‘grace under pressure’.

When interacting with locals in India the best way I have found it to be totally calm, respectful, and have fun. In fact I think it’s possible to have a meaningful interaction with pretty much anyone. It requires a stillness of mind to be able to recognise these opportunities. Sometimes the ups and downs of the physical can impact but I suppose that is evidently beyond my level of enlightenment just yet.

I digress…. Putting a bike on a bus is always a bit of a gamble. When I retrieved my bike from the bus roof on arrival, it was missing one of my ‘custom designed’ foam pipe insulation bar-end covers. This was not the end of the world admittedly, but it had a certain amount of sentimental value (at least 6000km of self-realised comfiness). I was able to create a new set from some foam and gaffer tape sourced at the local market. At first I thought I wasn’t going to be able to find foam with the right ‘non-flattening, non-popping, bouncy-consistency’(TM) then I found a roll that was just right!

My trailer suffered some damage to the net which I will fix with tie-wraps. It’s in a fairly sorry state now but it’s come a long way. I stand by the design and performance of the Extrawheel trailer as preferable to the Bob Yak competitor, having test-driven both on and off road. 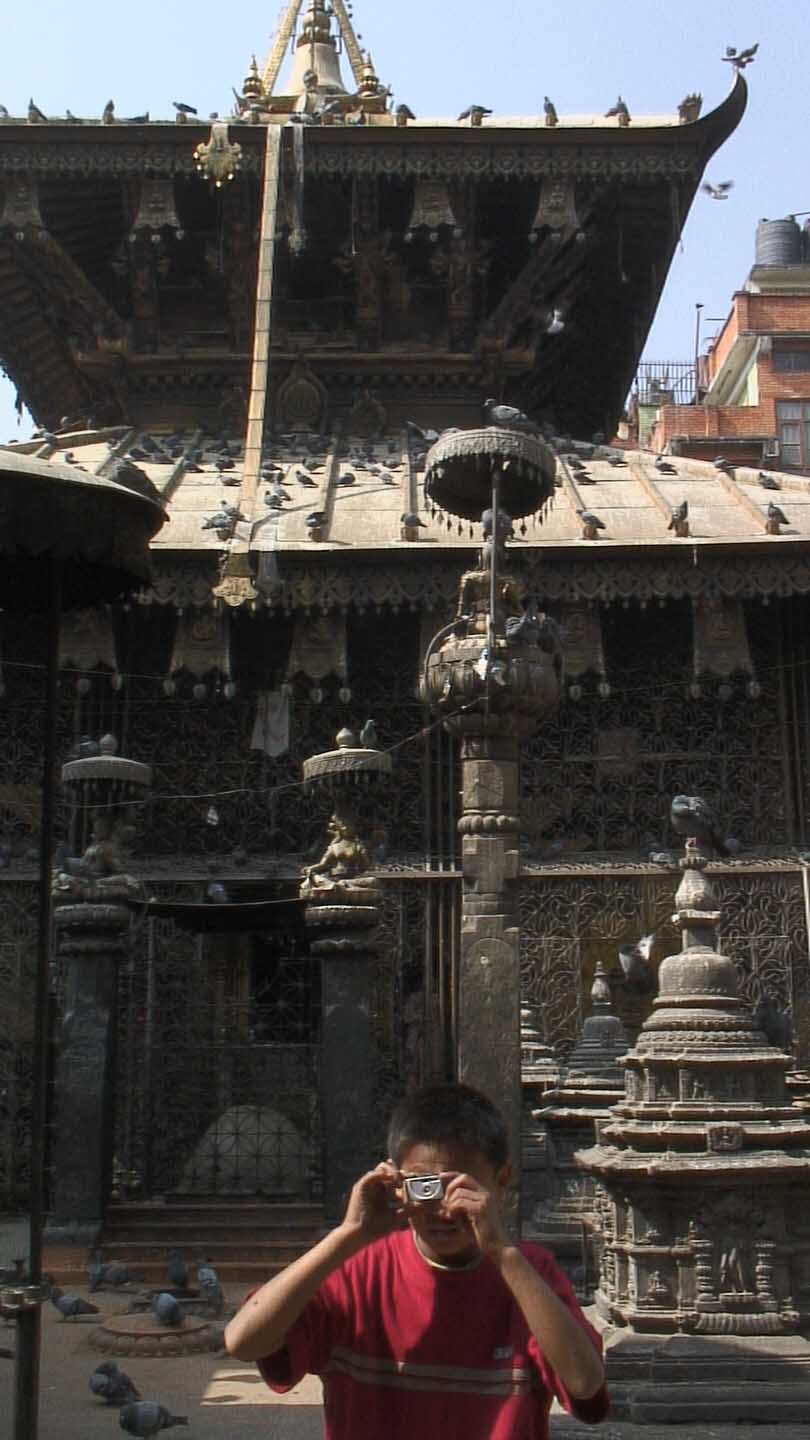 I walked through the busy streets near to Durbar square and gazed at all the interesting little shops. There were hand made tools, fabrics, sweets, household items, ornaments, clothes, shoes, tailors, herbs, pulses and spices. There was a colourful and a bubbling atmosphere which lacked the aggressive and persistence tourist touts at tourist places in India. That had really started to grate after a while. 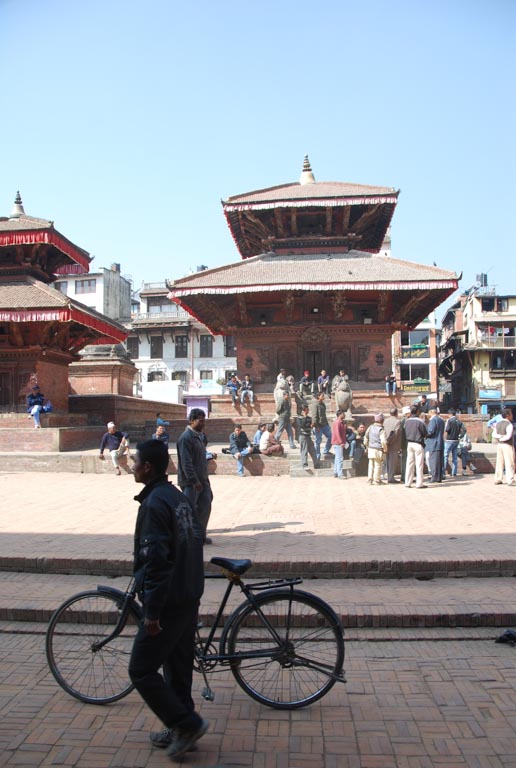 Around Durbar square is the old city where the streets are narrow and old buildings overhang the street below. Some of the old city was destroyed by an earthquake in 1934 and many were rebuilt, not to the same specification as before. The square was declared a world heritage site in 1979. One can see different ethic origins like Mongolian, Chinese, Indian and Nepalese. It’s very exciting and wonderful to see new faces.

The ambience and people feel like, what I might imagine to be,  a stepping stone between India and China but at the same time.

It fuels my adventurous desire to cross China in the future by bicycle and explore the far east. I spent the rest of my day going round in circles on my bike, getting lost and navigating gridlocked traffic. Often I would get off, and wheel my bike on the back wheel between any available gaps appearing in the motorbikes, cycle rickshaws, cars, cyclists and people shifting along in a stop-go fashion. Pedalling around I had the pleasure to be able to stop and gaze at the different style of temple here compared to India with Buddhist shrines and intricate carvings.

I’m off to sample some Nepalese food, or maybe cook some fresh vegetables in my room on the stove. My plan is to stay here tomorrow and aim to leave the day after.

Although I would like to spend more time in Kathmandu. It is like any city. It is expensive and generally (for me at least) tends to grind down my spirit and bring on a certain lethargy which can only be broken away from by getting out there into the ‘Real’ world.