We went off to Svaneti on a bike tour. I’d been staying at James’ place for a few days after arriving in Georgia.

Our new friend Vako driving in his suped up Delica 4x4 van and his bike trailer arrived we loaded up the bikes and drove over to the Hotel. On the way, I enjoyed sitting high up in this crazy vehicle with the tyres making a noise like the Batmobile. 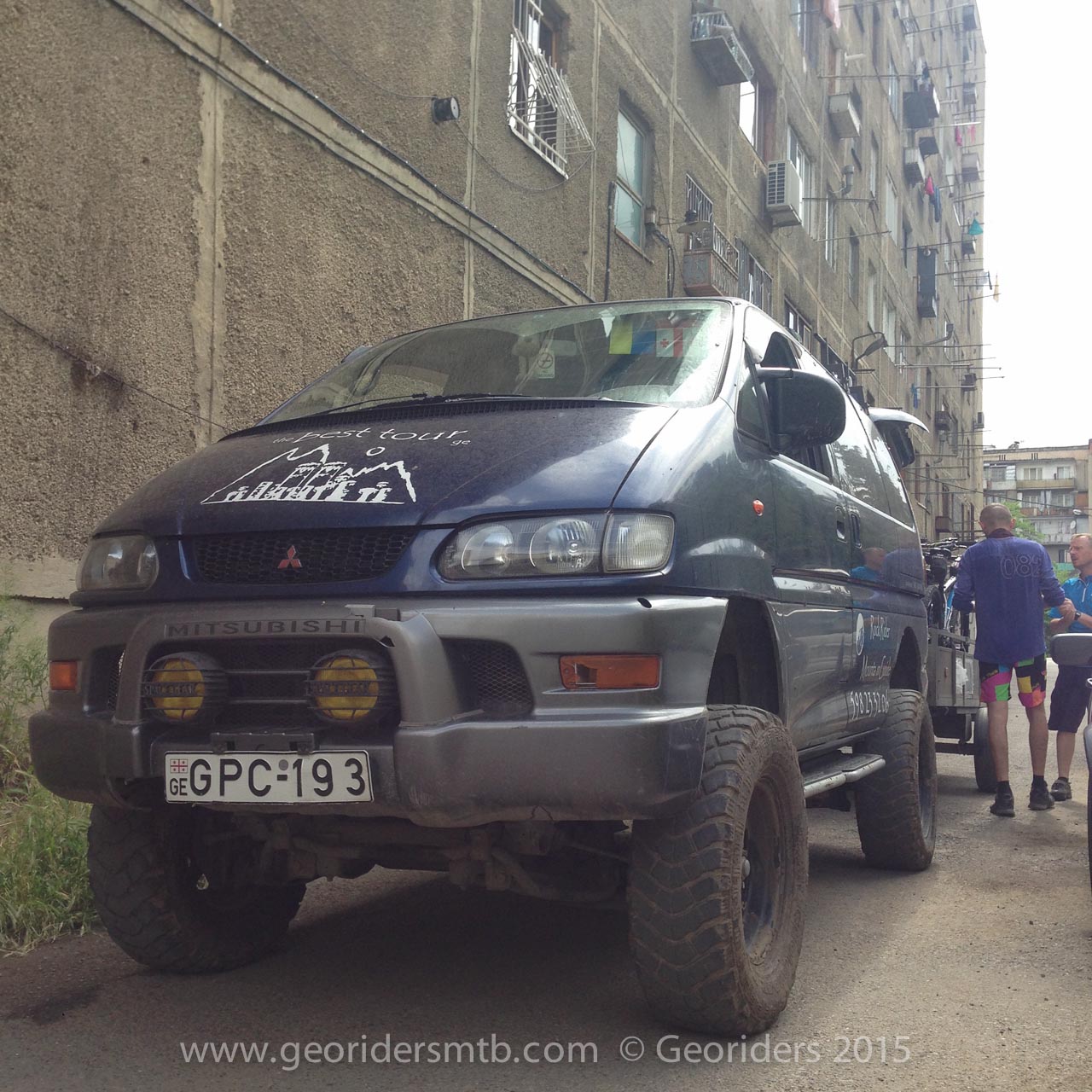 We picked up our guests - an American family from Boulder, Colorado and got on the road, driving out of Tbilisi towards Gori, the birthplace of Stalin and beyond to the West of Georgia. We stopped at lunch and caught up with Dato and his family in his car who was also joining up for the trip.

After lunch it was a good journey onward and we arrived up in the mountains with the mist drawing in. As we unpacked the bikes some road workers offers the guests beer for toasting to the beginning of our ride.

The ride began taking the road for about 30 km to a village called Mazeri and staying in the Grand Ushba Hotel. The guests were impressed the the beautiful accommodation backed by the mountain. I pitched my tent and then the storm rolled in. After a hearty dinner with cheesy dumpling, lasagne and more, I realised that such was the torrential rain that my tent wasn’t going to be an option and I joined Vako sleeping in his truck. 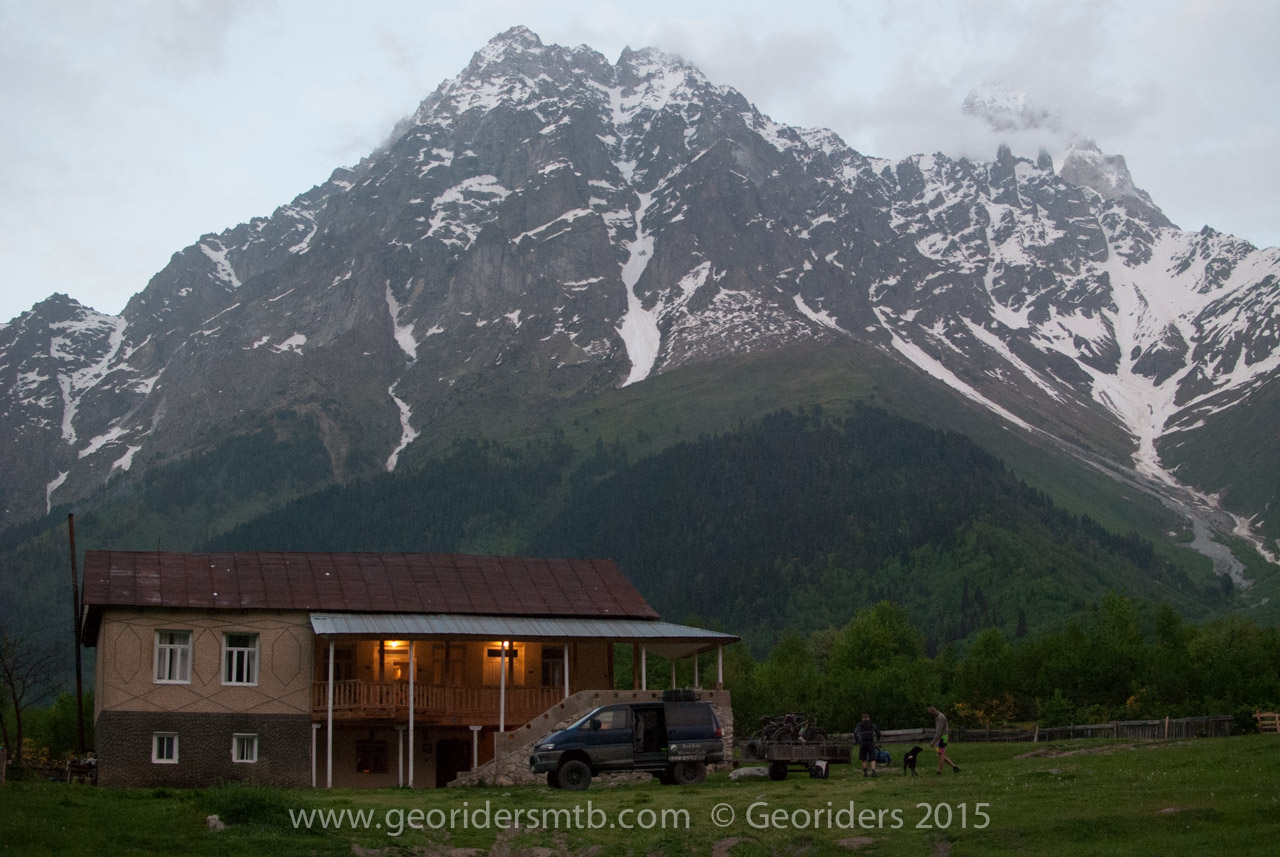 In the morning the weather had happily cleared and we took the vehicles part way up a shaded trail through pine forest and spent a couple of hours hiking up to some waterfalls and glaciers. On the way we met some border guards ‘looking for bears’. 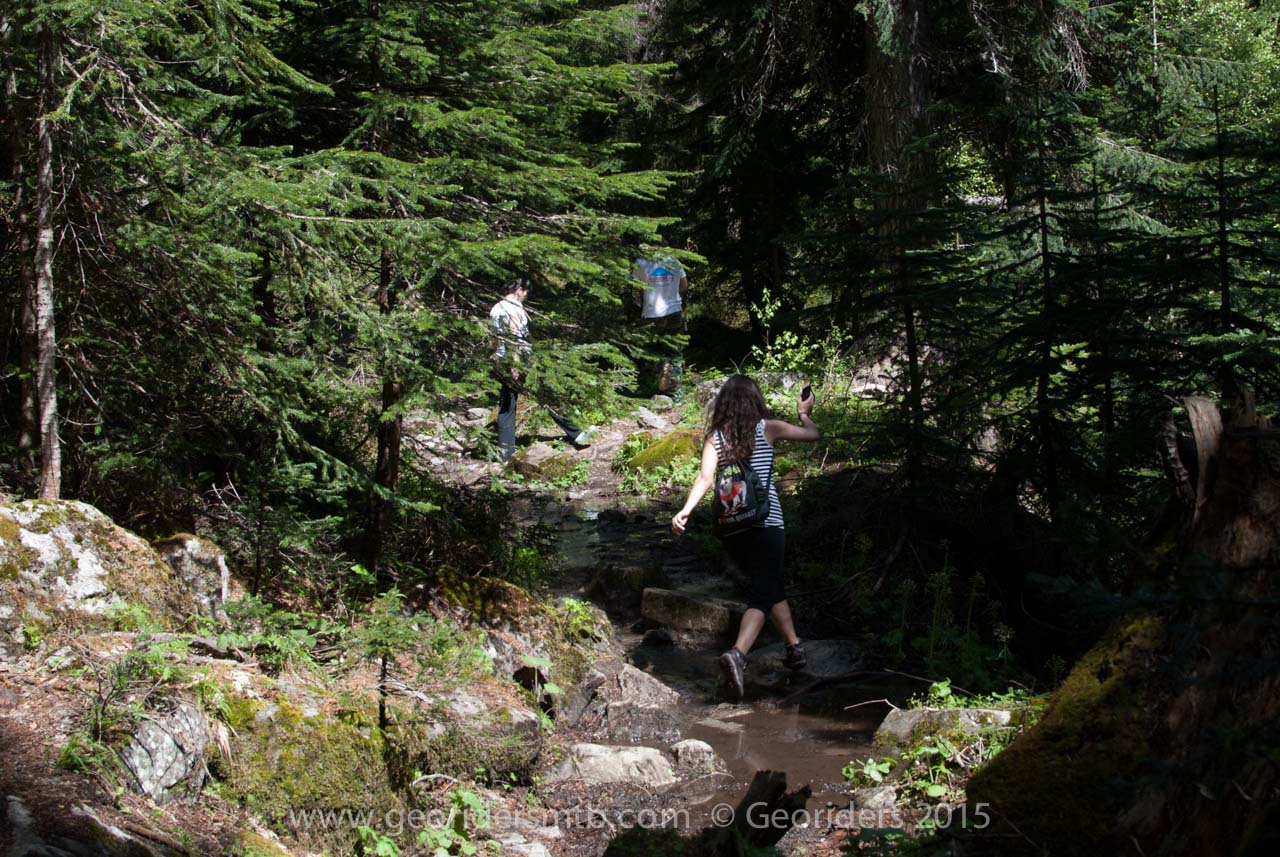 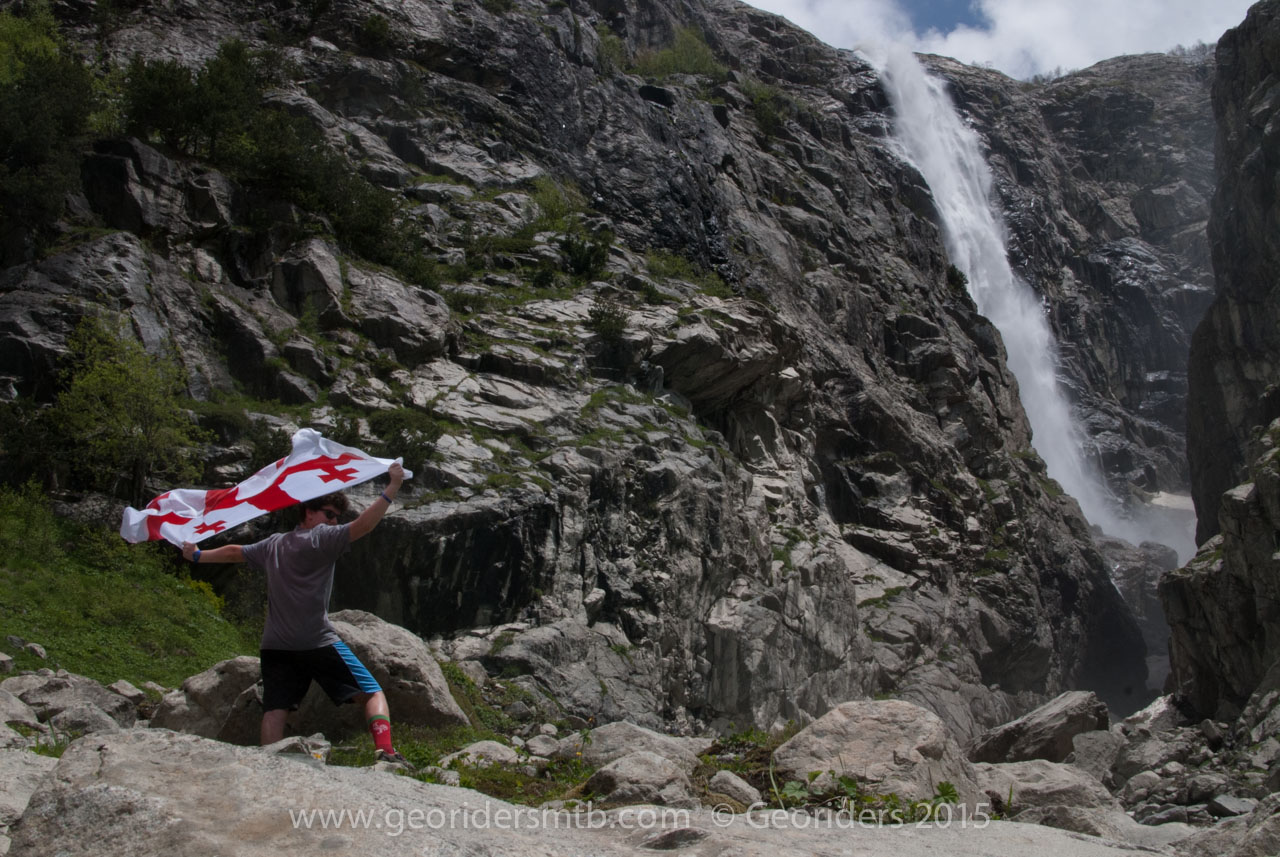 The trail back offered the chance to ride. Vako created a makeshift attachment for his Go pro to film himself doing a river crossing. We rode ahead on a jeep trail down to the village stocking up with snacks at a village shop and then hitting the road for 20 km of road riding until the impressive town of Mestia.

In central Mestia is a mineral water with the elders of the village sitting and chatting. We met there and then checked into a local guesthouse where an incredible supra feast was laid out for us with wine plenty of opportunity to replace lost calories. Our guests were developing a taste for the local food and culture and enjoying the ride. 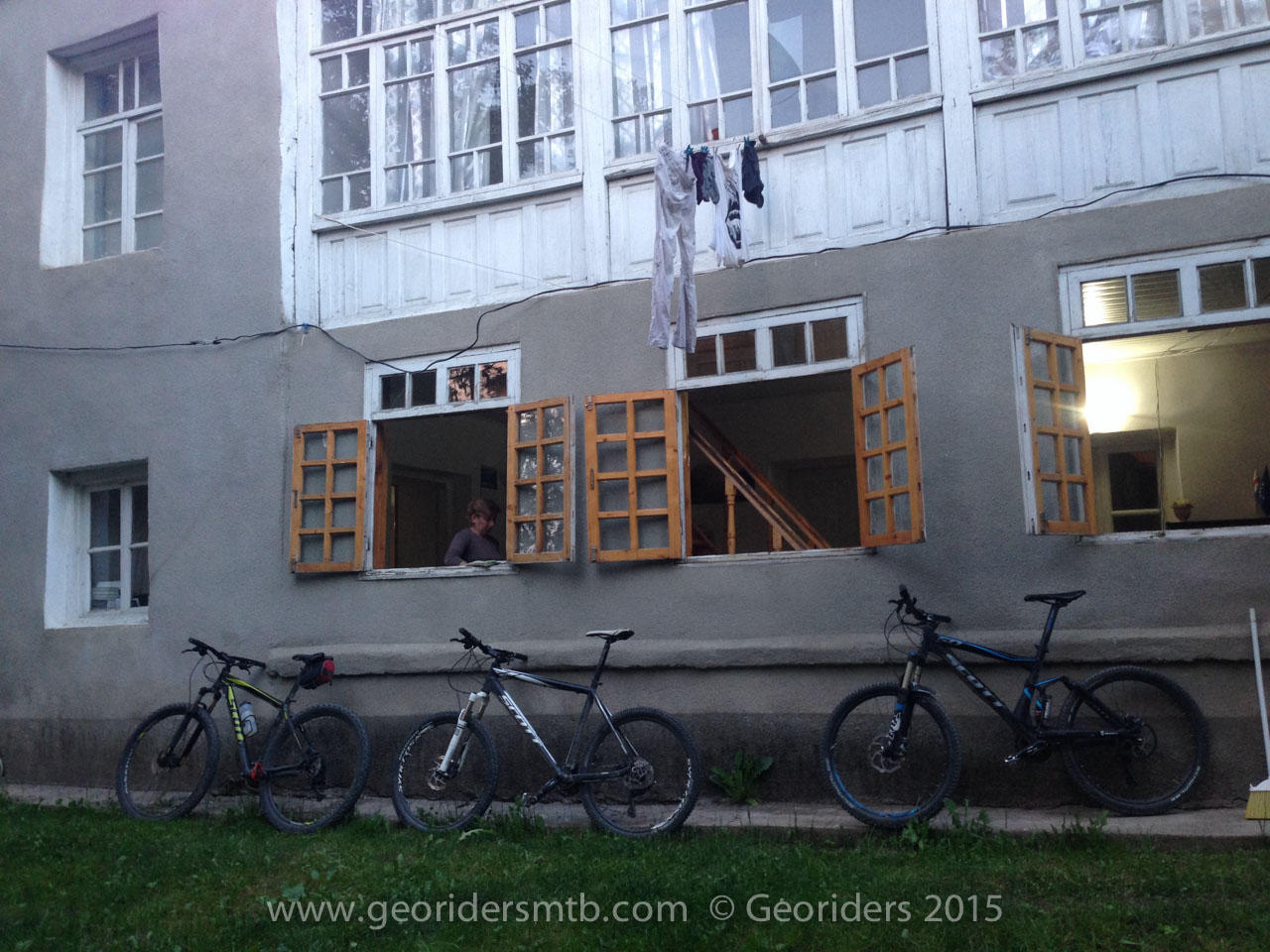 In the evening a surprise trip took us up by jeep winding on jeep track as twilight and nightfall closed in. Eventually we emerged to a breathtaking mountain vista and a ski run! which we took the vehicles up to the ski station and top of the chair lift to survey the entire mountain range including Mount Ushba. It was a special moment for us all to behold. 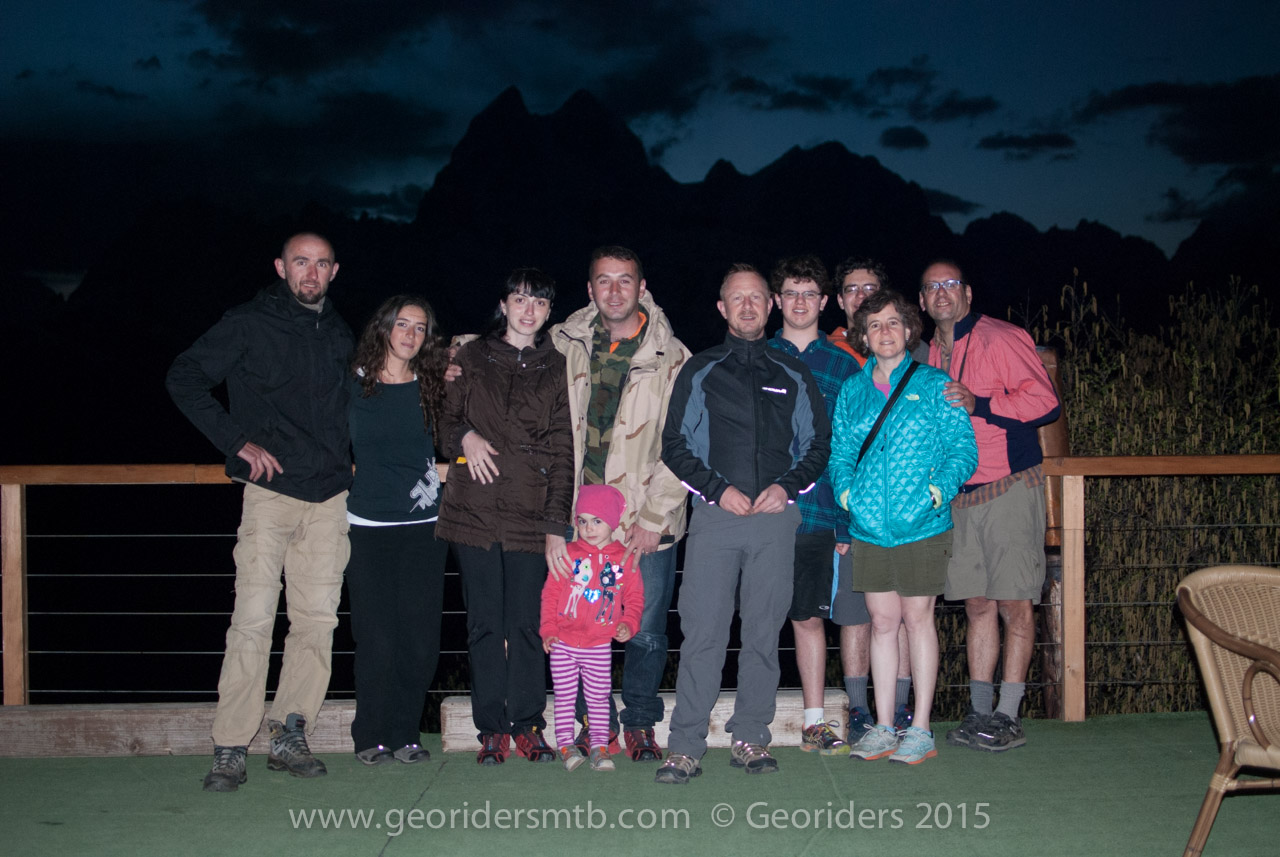 After we jumped back in the vehicles a huge thunderstorm began to bear down which added to the atmosphere as we returned to the guesthouse and a well earned rest.

The following morning took us on a visit to the local Museum of Svaneti with a  knowledgeable guide who showed us around and explained the impressive collection of historical artefacts that had shaped Svaneti. The museum has been refurbished and is a really worthwhile place to visit and we all enjoyed it. 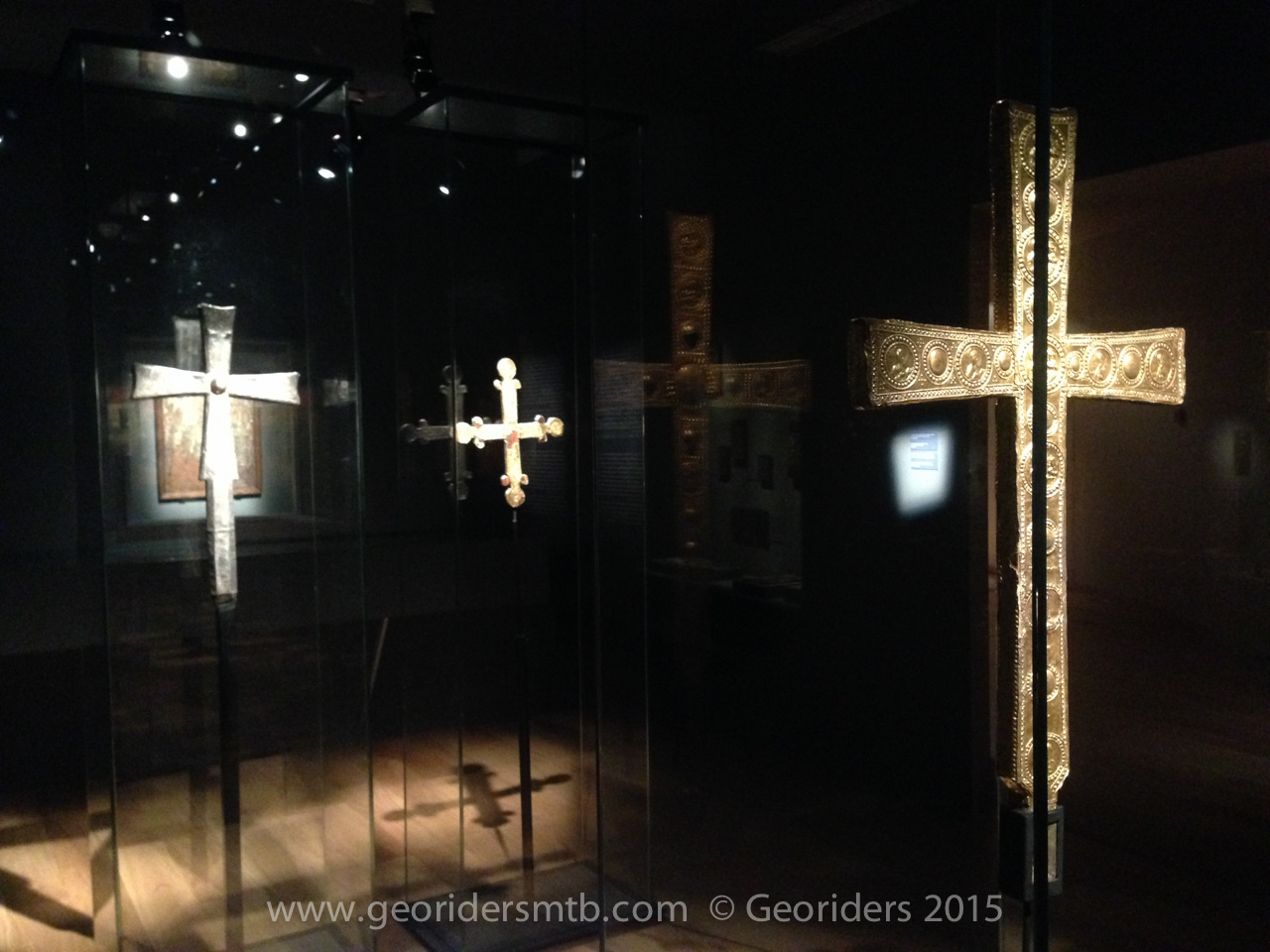 After the museum we jumped back into the vehicles and climbed up towards the road pass out of Mestia. The weather started to look a bit grim as the clouds circled and the wind swirled. We jumped out near the pass, donned warm clothes and waterproofs and took to some single track riding through and past drifts of snow, trickling streams and heather (a landscape that reminded me of Yorkshire). 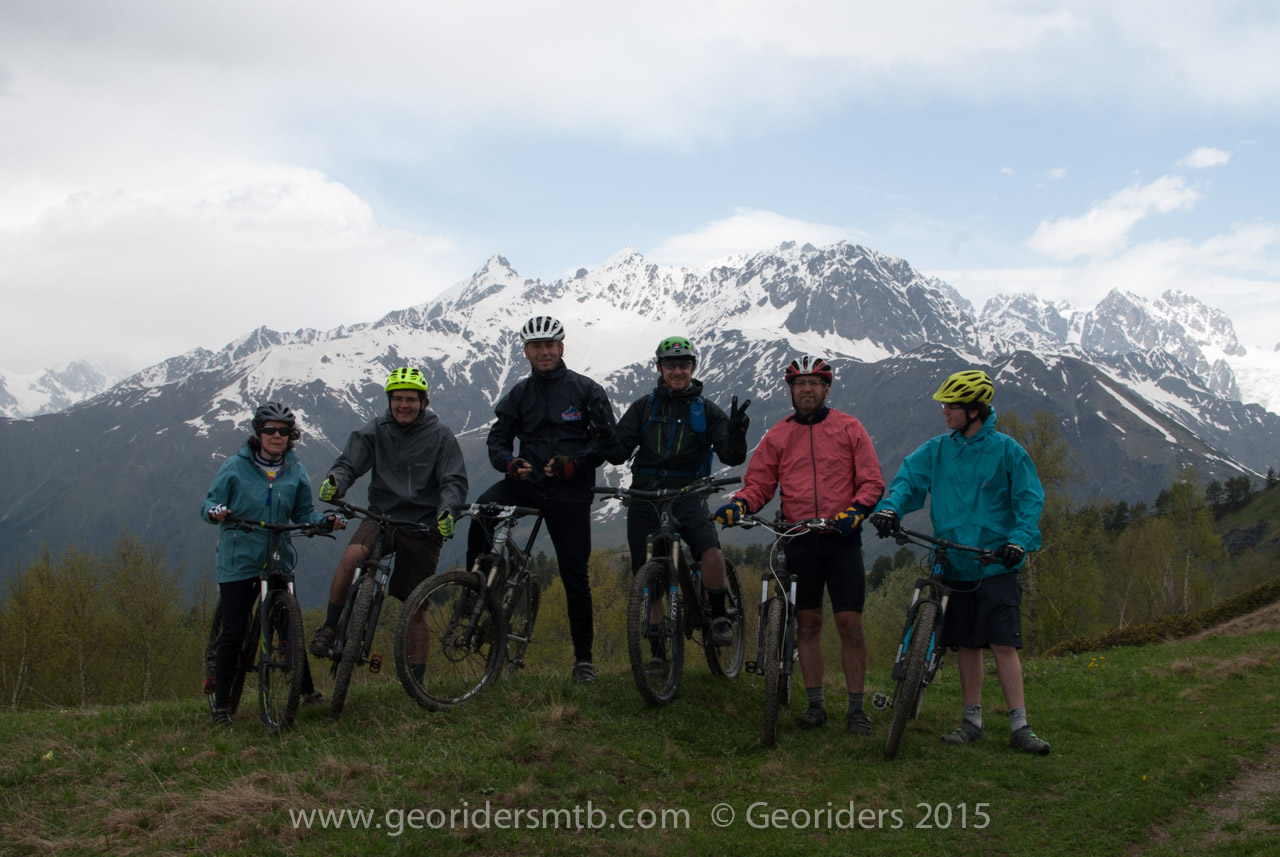 Then descending down through pine forest on switchbacks to a stream crossing, mountain side traverse with incredible views and a descent through the valley down to the village of Adishi; sharing the track with a band of horse-backed villagers. 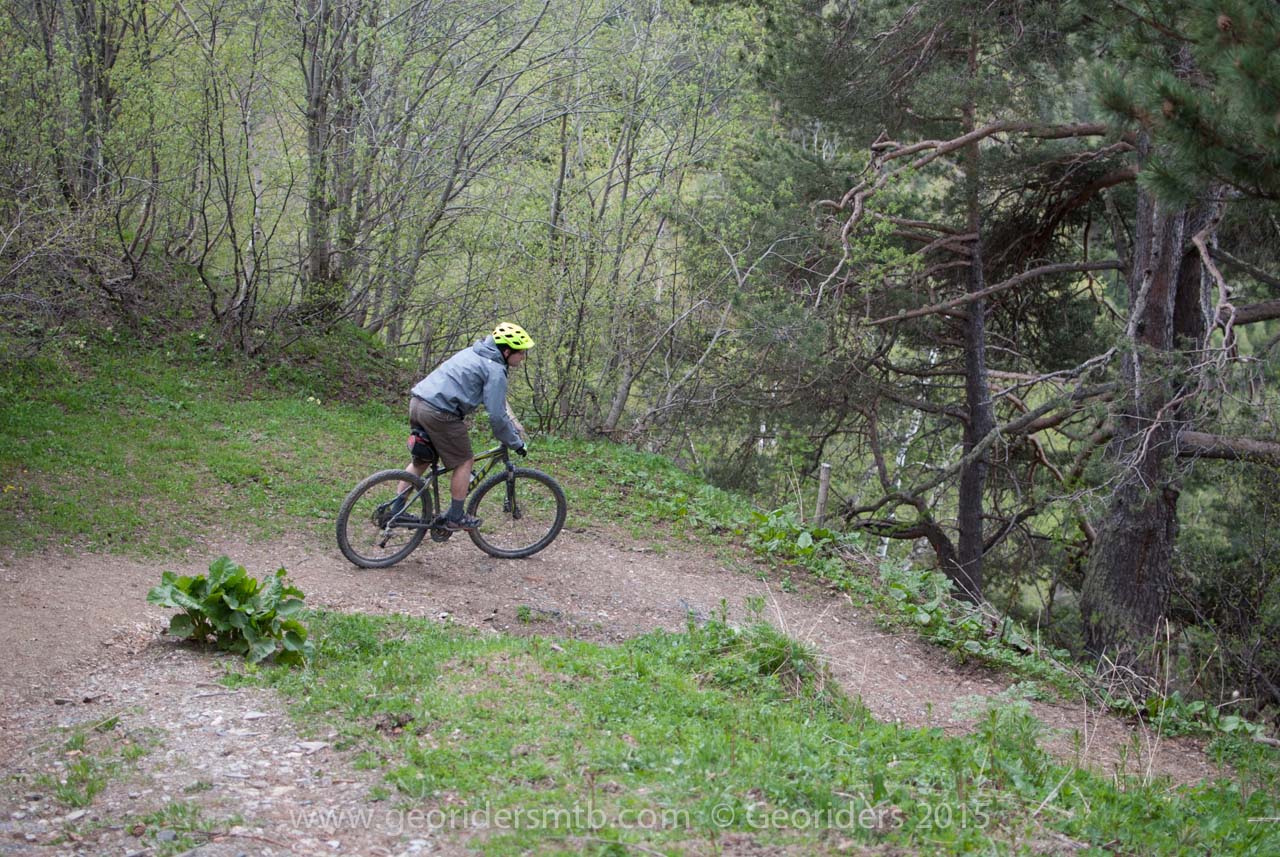 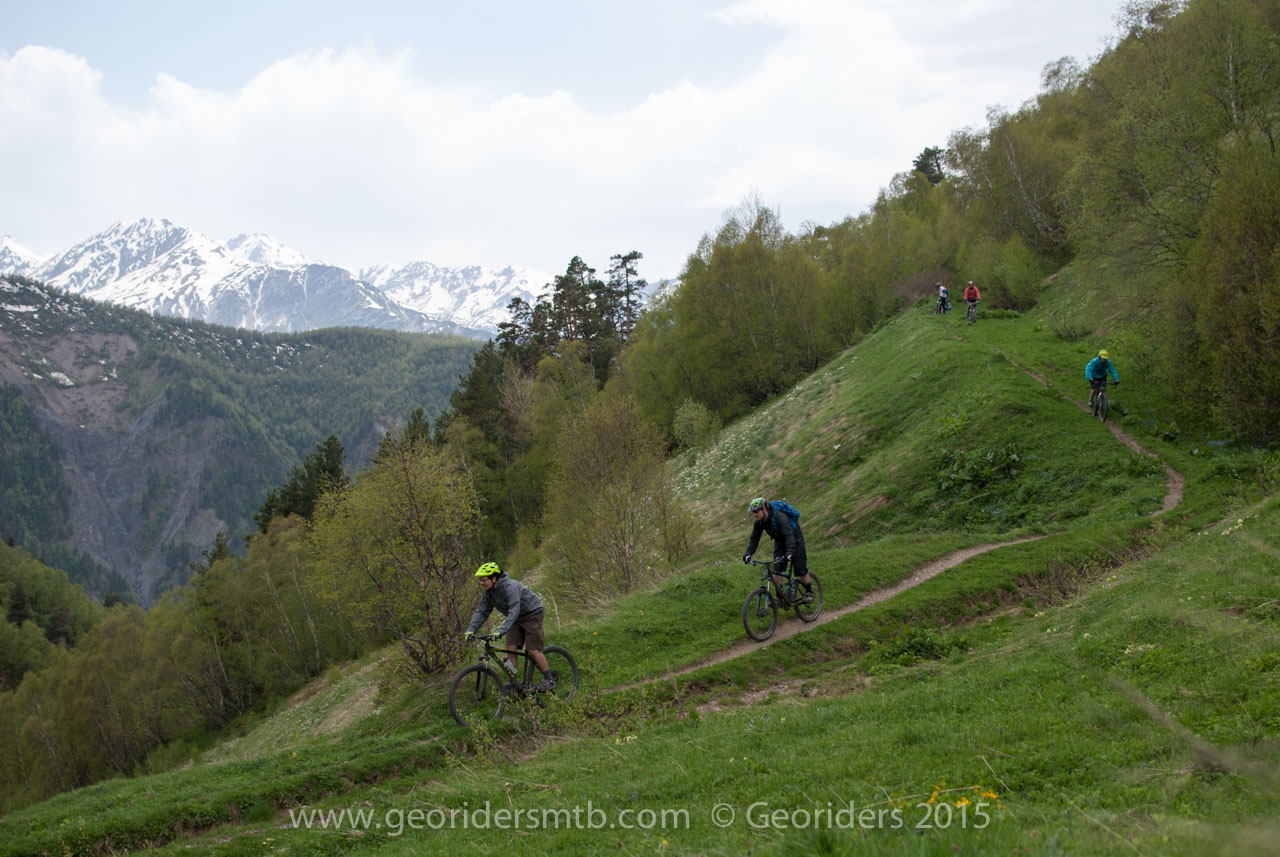 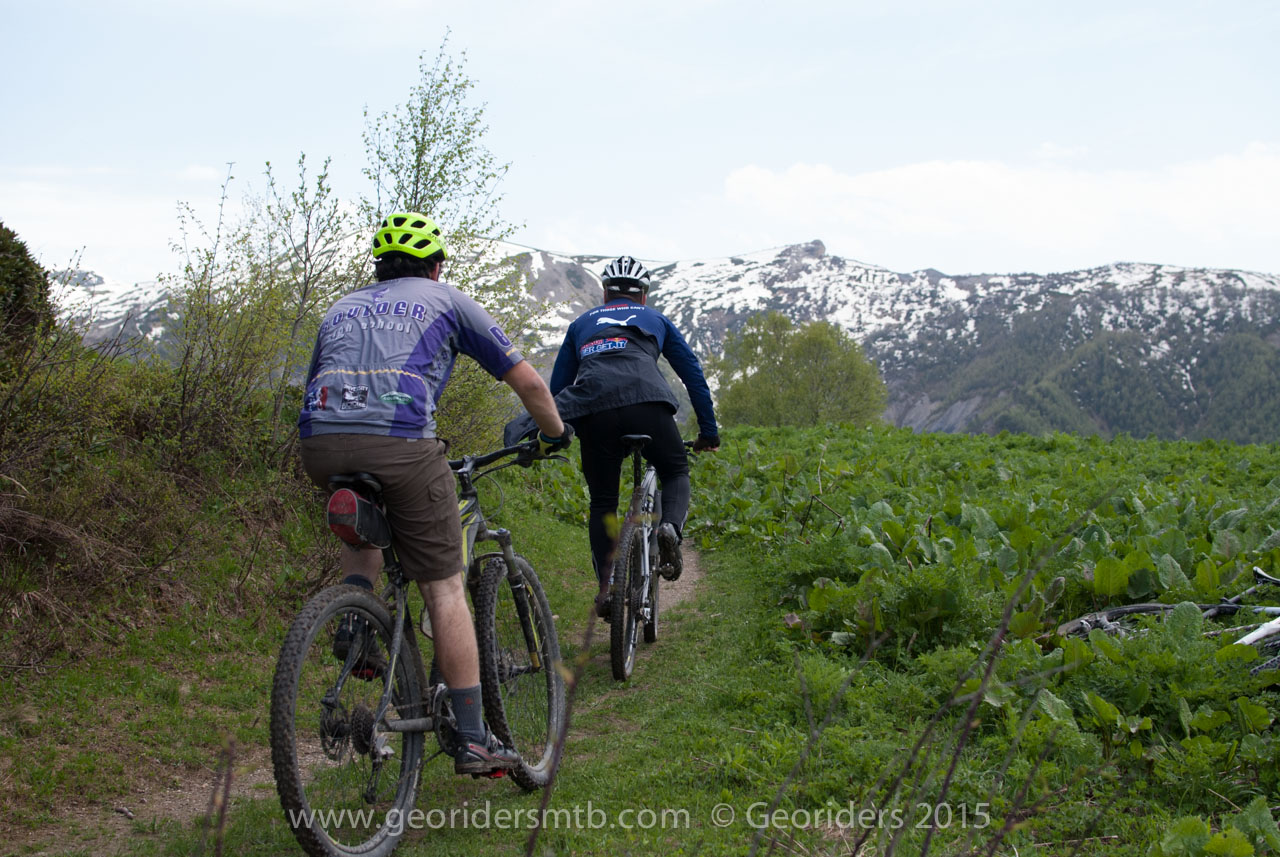 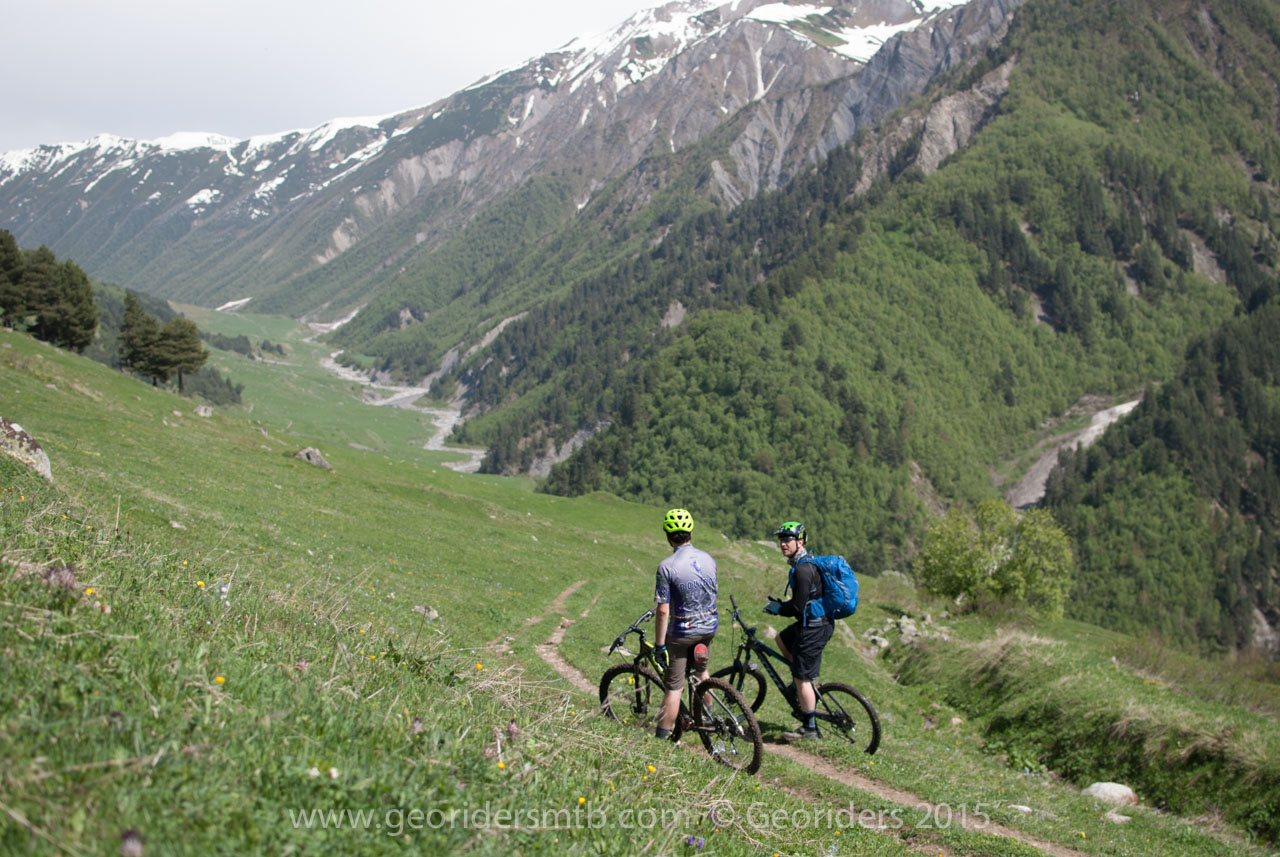 We past by above the village on rocky single track with a top down view over the amazing towers that can be found in this medieval village. 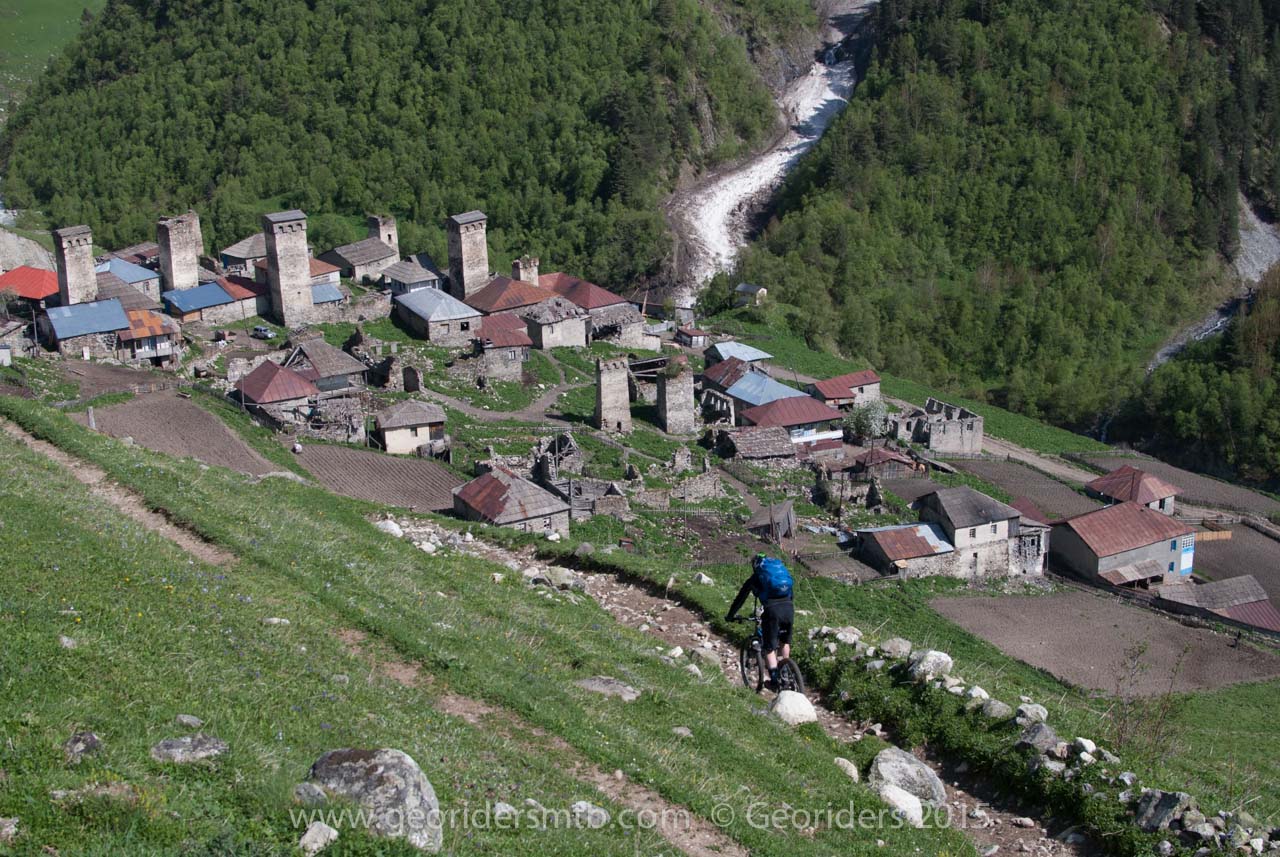 The downhill through the village saw us meet some locals and see the old way of life, tilling the fields, working with old tools and being amongst what felt like a film-set, before rejoining the vehicle for a puncture repair. Once up and running again the downhill continue for many more kilometres on wide jeep track following the bloated river, splashing through streams, hopping small slabs of rock jutting out of the mountainside.

Wide grins gradually filled with grit and streams splashed the bikes with dirt. After an hour or so we reached a village where our driver was relaxing eating yoghurt with the locals. James and I washed the bikes with a hosepipe coming from the ground whilst we made friends with some dogs, pigs, and other livestock wandering around.

We put the bikes in the car and continued by jeep track up into another valley, riverside, gradually climbing. Our destination was Ushguli, the highest inhabited village in Europe, an outpost, surrounding by high mountains and glaciers. A thunderstorm rattled the skies.

Our American guests were fully in adventure mode by now and enjoyed the scenery - people working the fields, the stone-built houses, people on horseback, the Svan towers, wondering who lived their and why they chose to stay in the mountains rather than move to the city. Something kept this strong community there; this place was full of heroic stories and you could feel it. 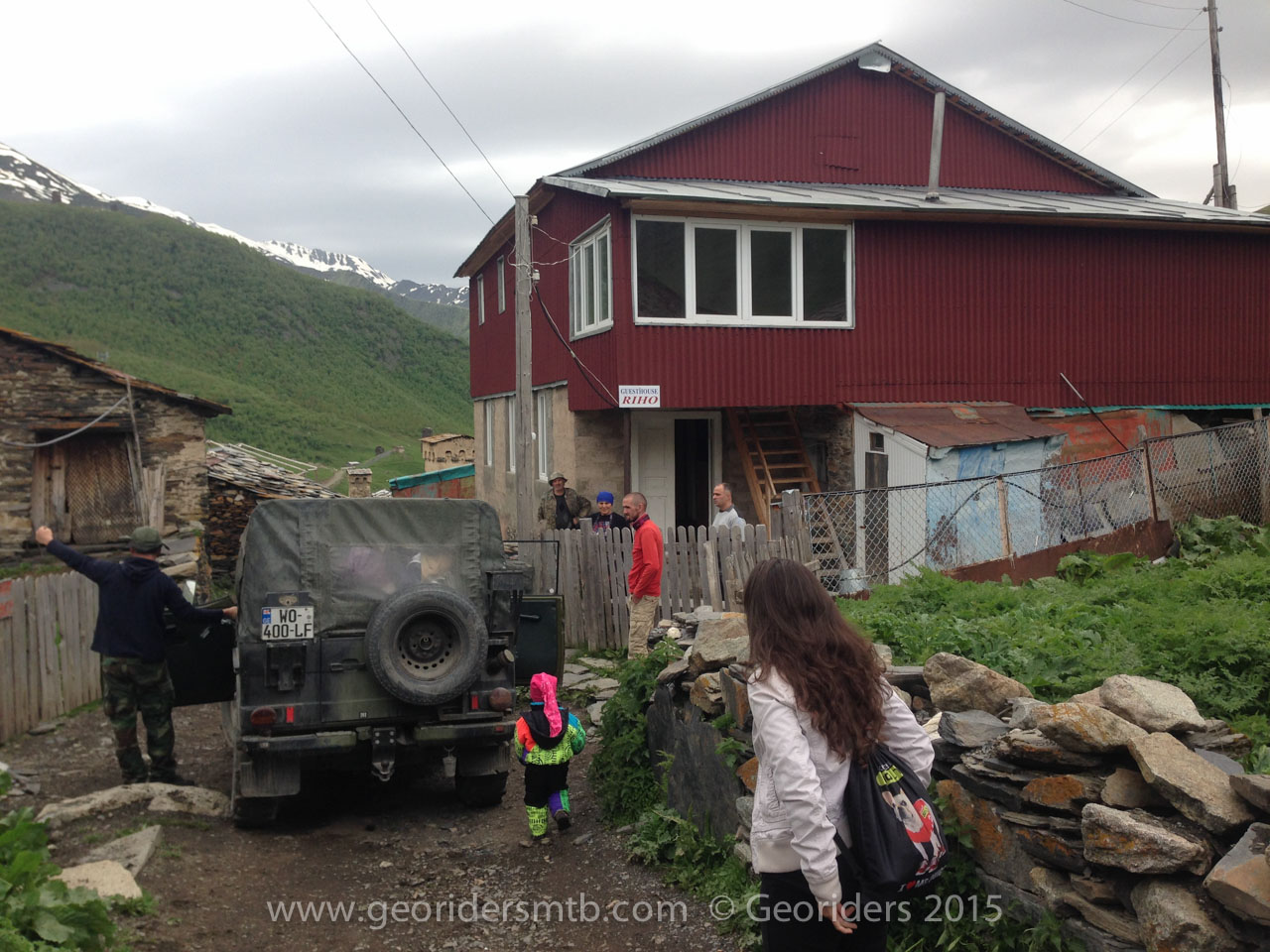 Our guest house and wonderful host laid out a full spread of food and wine for our group of 11. Many stories and reflections from the days were exchanged. One of our guests owned a bike shop and we talked about vintage bike parts and expensive hand built custom frames, or the biking scene in Boulder, Colorado where they do biking in school!

Hot showers were welcomed and our cosy rooms were lit by candlelight, due to the electricity being currently off. After dinner, I took some time to look at the stars, bright in the sky, with no light pollution; a mesmerising sight.

After breakfast the following day we hiked up the valley towards the glacier and Dato and Vako went to check out the Zagharo pass as we’d heard it was no possible to cross, still snowed in. The hike was perfect- a beautiful mountain valley, following the river, passing wild horses, through meadows filled with flowers. 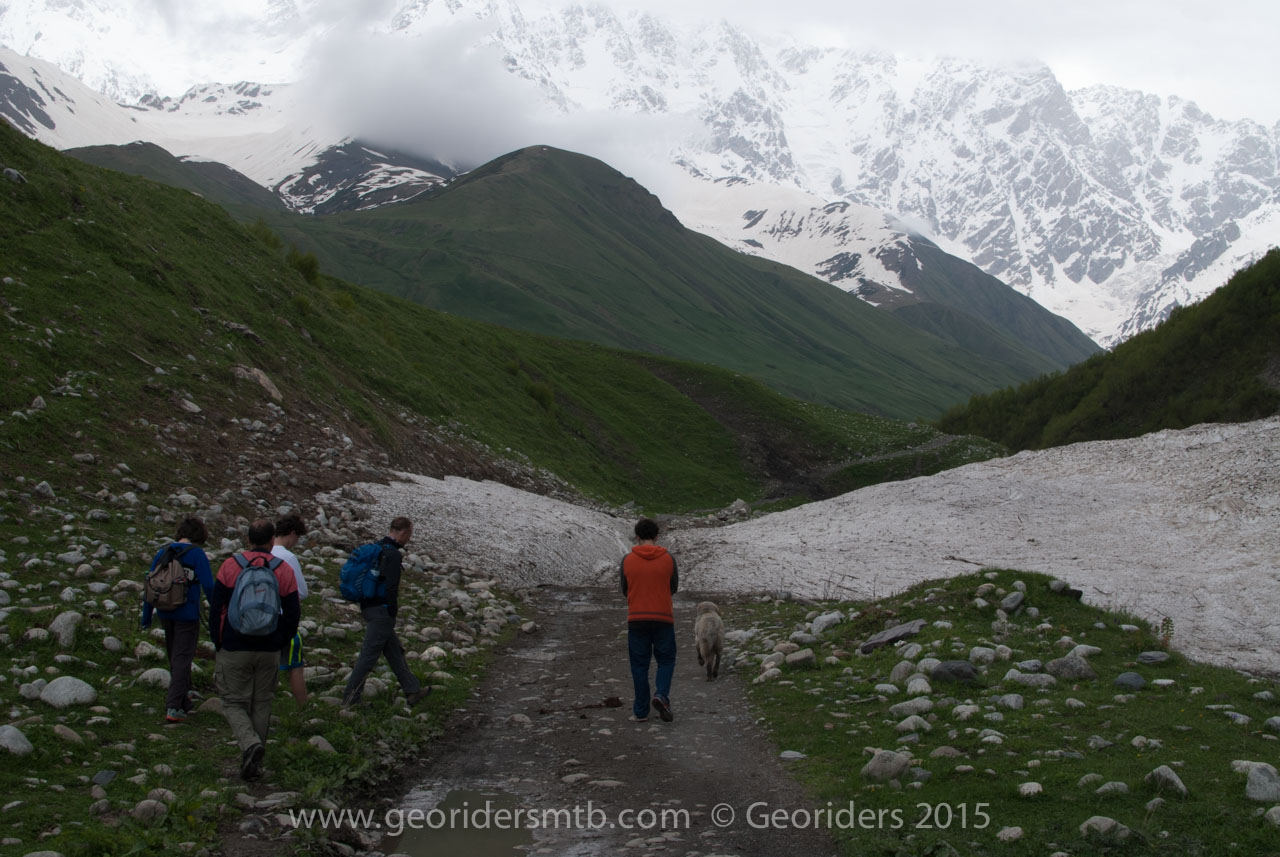 It was indeed impossible to cross the pass so we jumped in the vehicles and headed back to Mestia for one further night. The road took us back towards central Georgia on the way to Tbilisi and we called into Gori, the birthplace of Stalin, to visit the museum, railway carriage, house of Stalin and Stalin Square and reflect on the life of the notorious dictator and the recent turbulent past of this provincial town.

Feeling triumphant after a brilliant tour the tyres hummed on the road into Tbilisi as the sun set in the wing mirror, following the Mtvari river into the city, the noise and chaos of the city seeming totally at odds with the peace we had felt in the mountains. We were back in ‘civilisation’! 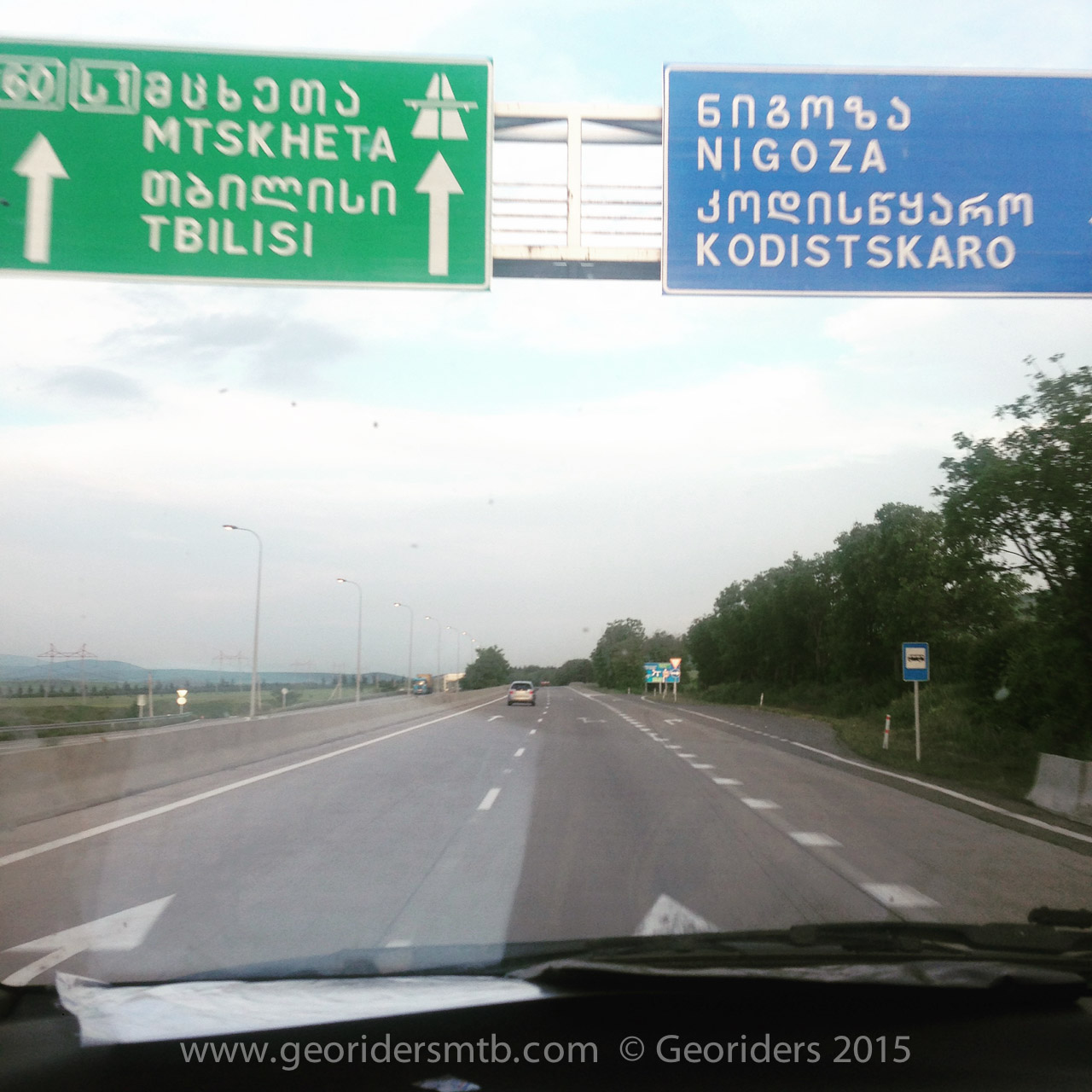 The following day we did a day trip city walking tour taking in many sights in the old city before wrapping the week up with a feast on the balcony reflecting on the week and speaking of our guests onward stop over in Istanbul on the way back to the states.

The week had been full of great stories and experiences and a real opportunity to learn and improve the service of Georiders to continue to allow guests to have an adventure and discover Georgia.