The weather in Tbilisi over the last 2 months has been bizarre to say the least. When Tom and I arrived in Georgia in Winter of 2008, it was the coldest winter for 30 years. I would hazard a guess this summer has been the wettest!

There were violent thunderstorms practically every day for 2 months. I experienced the full brunt of these on multiple occasions whilst out riding. In addition, I had a pretty serious disaster in my flat, caused by the rain.

The weather has been clear and fresh in the morning, progressively getting hazier and culminating in a muggy heavy afternoon. Around 5/6 pm a familiar earth-shaking clap of thunder could be heard reverberating around the Tbilisi valley, and not long after, huge torrents of rain turning the streets into veritable rivers of silt and dirty water.

I was talking online to Mark (who I cycled to Hungary with). I was typing to him, ‘this storm is crazy, I’ve never seen such as volume of water so quickly’. Mark said ‘wow, that must be amazing’. This coincided with a quick message from me, saying my bedroom roof has just fallen in!!!, and Mark’s response ‘are you alright mate?’. 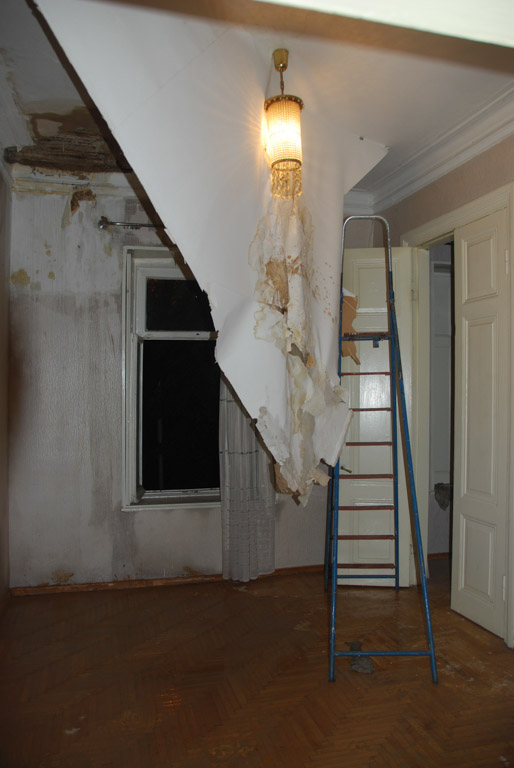 I subsequently downed tools and ran over to try and salvage anything I could. I moved a chest of drawers, wardrobe and bed out of the room as quick as I could. After the landlord and I had sorted the whole mess out and it had finished being redecorated a few weeks ago, it seemed a lot harder moving all the stuff back into the room!

In all seriousness though, this is a big problem. People have died due to these storms. Many of the old houses aren’t in a state to deal with that kind of weather. People aren’t used to driving in the wet and don’t slow down much. In addition, it has caused flooding because of inadequate drainage systems. Without preparation by government, people are at the mercy of the weather.