I recently visited Oakham Cycles to test ride the Surly Long Haul Trucker. I wanted to check it out because it is a go-to bike, good value, used and recommended by many for adventure cycle touring. Having always built and ridden my own bikes based on mountain bike frames and with the abundance of specific adventure touring bikes now available I wanted to compare the bike considered to be the benchmark to other bikes I’ve ridden. 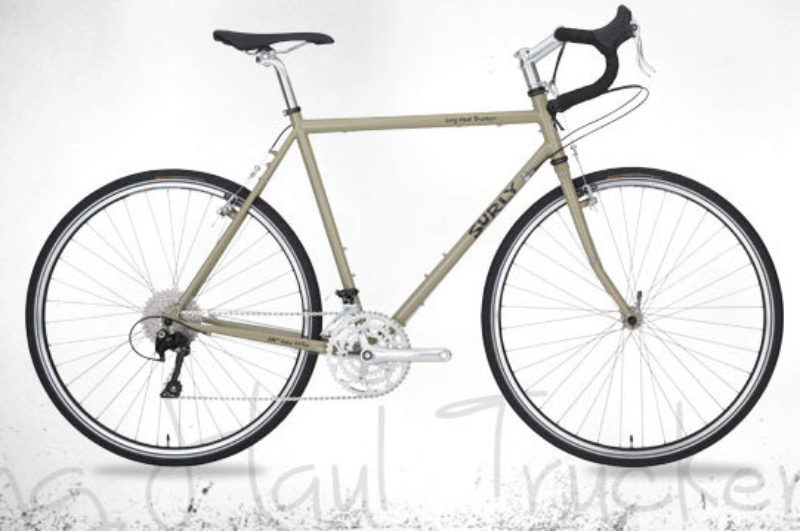 Surly Bikes is a designer and importer of bicycles, frames, parts, and accessories based in Bloomington, Minnesota, established c. 1998. Surly is owned by and shares facilities with Quality Bicycle Products (QBP). The company is well known in bicycle messenger and single-speed culture and helped establish the Single Speed World Championship (SSWC). Surly specializes in steel bicycle frames. Frames are made in Taiwan from 4130 chromoly steel.

What they say about the Long Haul Trucker

Over the years our Long Haul Trucker touring frame and complete bike has developed a devoted following. People understand and appreciate the LHT’s dependability and everyday rrding comfort, whether they’re cruising to the store or lost in the middle of nowhere.

The Long Haul Trucker was designed in all aspects to go the distance in relative comfort, and to be able to haul a bunch of stuff. Its low bottom bracket and long chainstays provide comfort and stability. We gave it ample tire clearance for larger tires (larger tires soak up a lot of road static) with room for fenders. The frame’s tubing is thicker-walled and larger-diameter than standard road and sport-touring frames, and this pre-tunes it for the weight of cargo. And it’s got all the braze-ons, from rack mounts to water bottle cage bosses to spare spoke holders. Like all our frames, it’s made of CroMoly steel. You’ll probably never need to have the frame repaired, but if you do you’re more likely to find someone who can weld steel than someone who can weld titanium or aluminum. Repair carbon fiber in the middle of Mongolia? Good luck with that.

For the completes we chose components that balance technical ability, durability, and value. This is stuff that works well on a fully loaded tourer, will last you a while, and won’t shoot holes in your wallet. Add whatever else you need, like racks and fenders.

The standard Long Haul Trucker is compatible with good ol’ rim brakes. It’s available as a frameset and as a complete bike, with 26˝ wheels in 42–62cm frame sizes, and with 700c wheels in 56–64cm. The fork has two sets of eyelets on the dropouts as well as at proper mid-blade height, and bosses built into the side of the crown. All this makes the fork compatible with most types of racks, and provides options how you can mount racks and carry your stuff.

Go somewhere. Do something. Ride a Long Haul Trucker.

What BicycleTouringPro says about it

If you want to carry a lot of stuff while riding your bike long distances, you’d be hard pressed to find a better bike than the Surly Long Haul Trucker…specifically designed for loaded travel, a low bottom bracket for stability, long head tube, long chainstays…a steel frame with all the braze-ons that you would ever need for v-brakes, racks, bottle cages and even spare spokes…Beautiful, aren’t they?..All the Surly bikes we’ve come across (the Steamroller, Crosscheck and now the Long Haul Trucker) are certainly not on the light side. But they are built to last – sturdy and rock solid. The relaxed angles and the longer wheelbase make the Long Haul Trucker a simply brilliant ride.

What I say about it 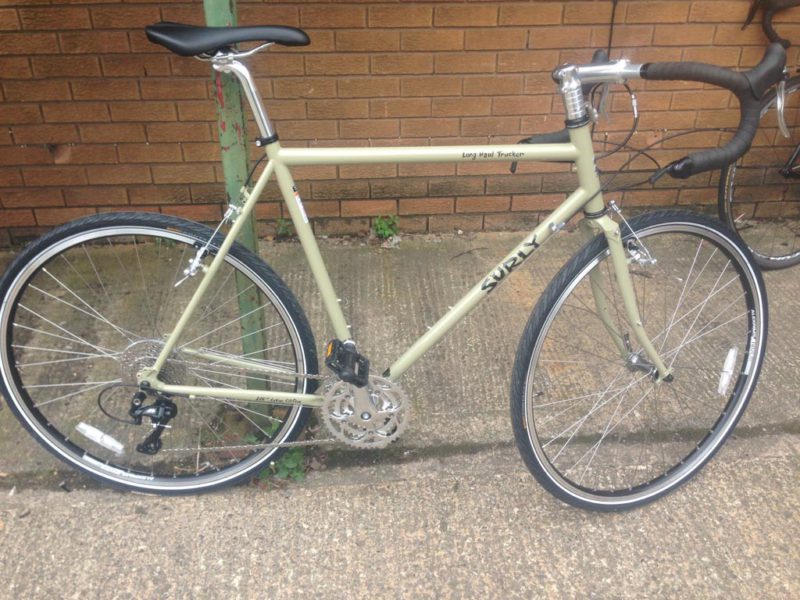 It isn’t a light bike. It looks simple, basic even. There is something about it that defies convention. The bike shop owner was storing it in a side room like a hidden secret weapon and there seemed to be a certain common understanding about its potential. Its long and sturdy. The parts are simple, commonly available and reassuredly well specced.

Benefits of the features

I rode it for a short ride near the bike shop. After significant research into a new touring bike even with all the options available now the Surly Long Haul Trucker still ranks very highly and remains the benchmark, so I had to try it.

At first it felt long for me, but then after some time riding I realised how it is designed to be slouched over for hours. It glides along and with that extra weight feels confidence inspiring and eggs you on, which is exactly what you need for long distance riding. The drop bars offer different hand positions. I’m not sure how I would fair over the long term with this system, but the main this is that is gives you options and there is space for a bar bag.

The Surly Long Haul trucker is a bike I had to try out. It is a bike I would own as it is always going to be a reliable option and the main thing is that means minimum resistance to the main aim which is to get out on the road on your bike and have adventures.