Tom, David and I went for a bike ride into the Caucasus mountains of Georgia. I’d been planning it for a while and I wanted to get some proper riding in before the snows descended.

Tom arrived on the Sunday but leaving was delayed until Tuesday. To pass the time we decided to build up my new Kona Caldera frame, ate Khinkali (Georgian dumplings) and deejayed in Tbilisi at a cafe at the TV tower. 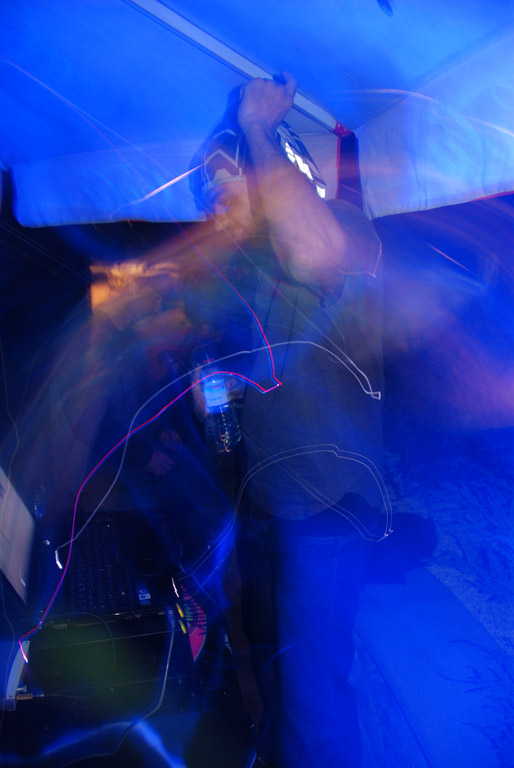 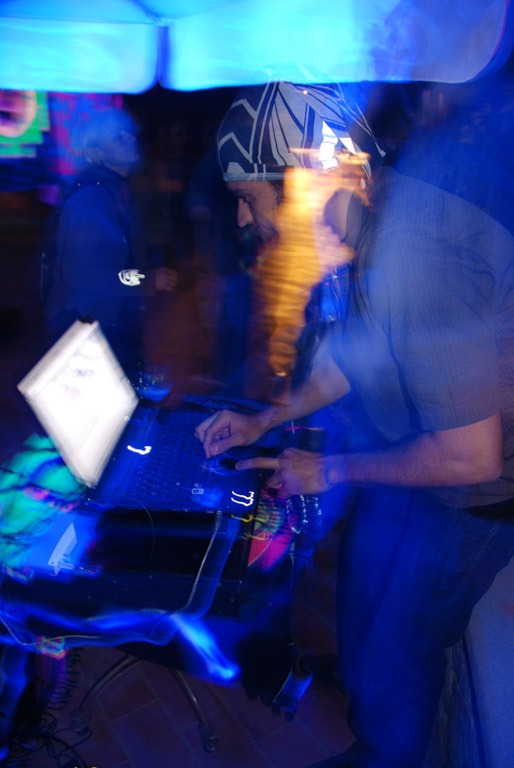 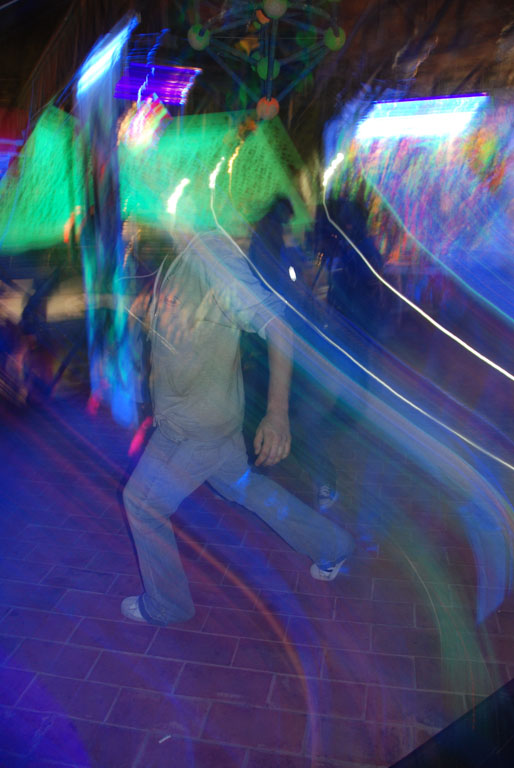 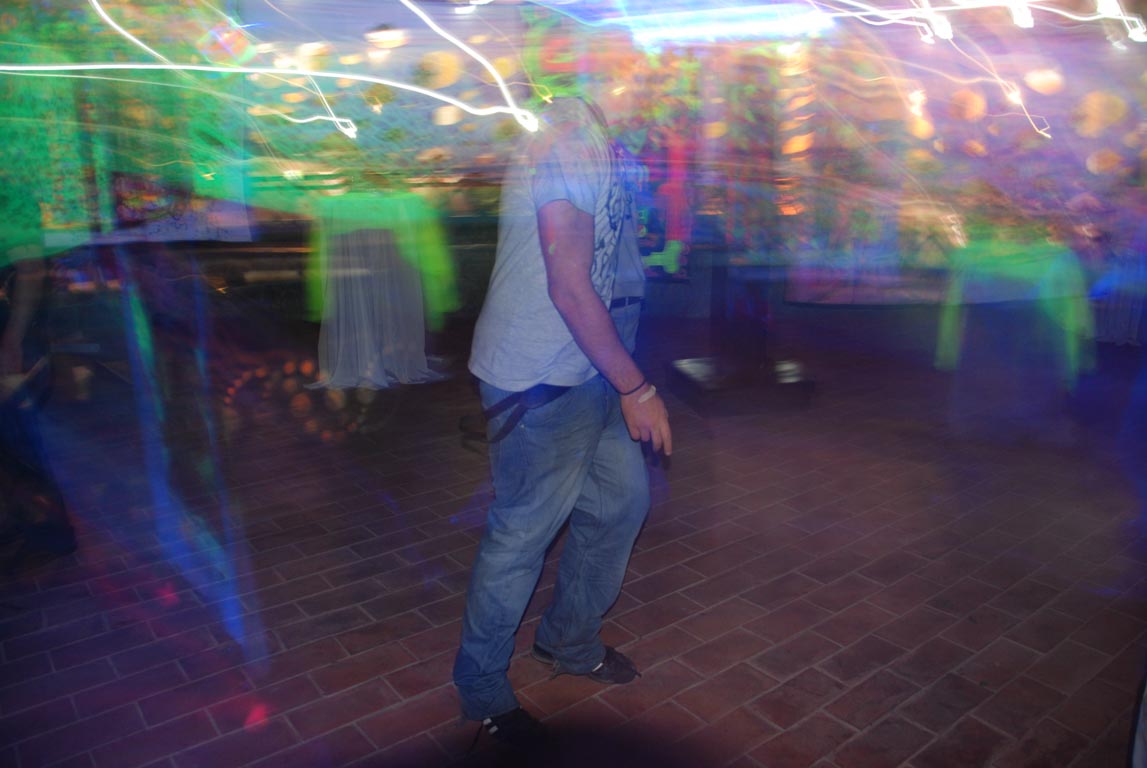 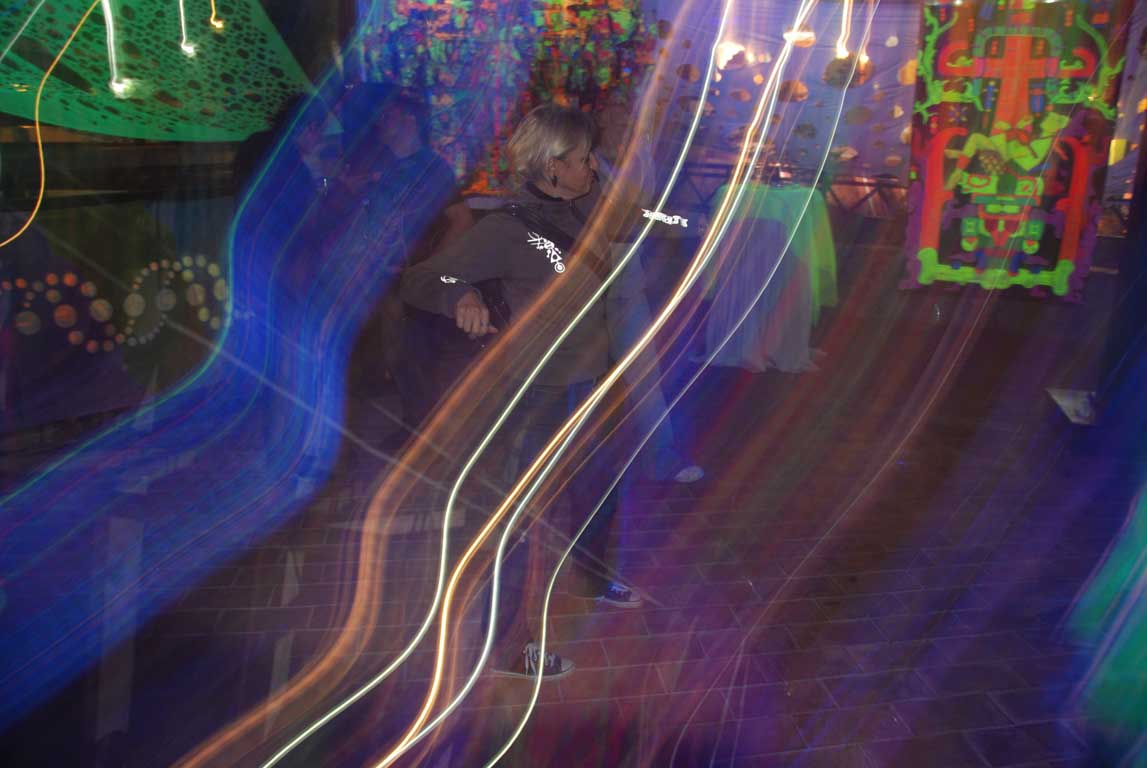 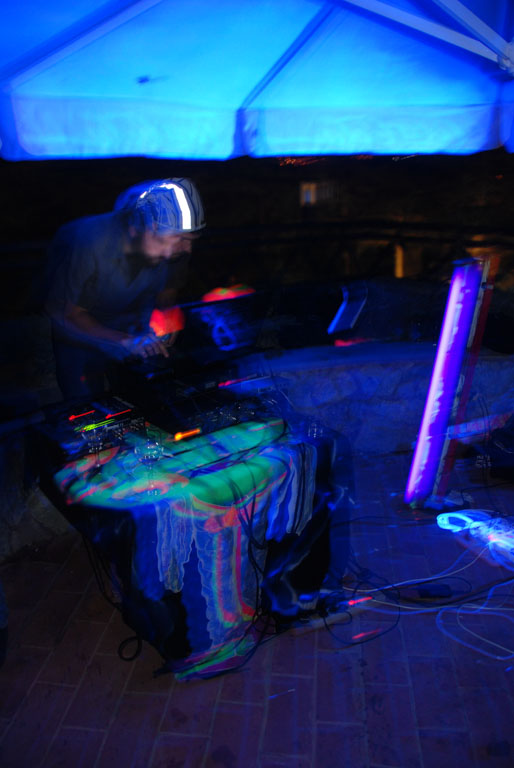 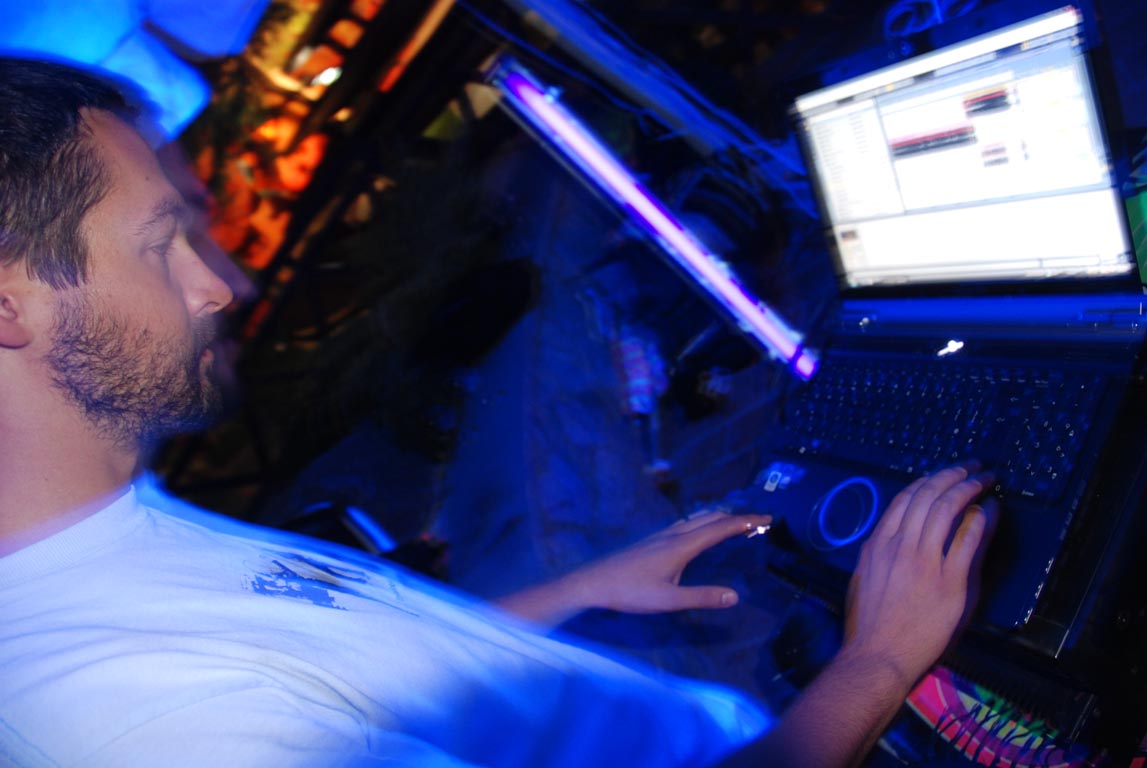 On Tuesday evening we rode through the streets of Tbilisi to the bus station where David negotiated putting our three bikes and kit in the back of one of the old Soviet buses. The bus trundled the 35km to Zhinvali where we would begin our ride and where we would stay the first night with David’s grandmother. We were dutifully plied with armfuls of freshly picked apples and ate plates of lobiani (bean stew) and then got an early night ready for an early start the following morning. Anyway, there were no lights in the house and hadn’t been for an entire year because another local resident wouldn’t pay their electricity bill so all the street’s supply was cut off. 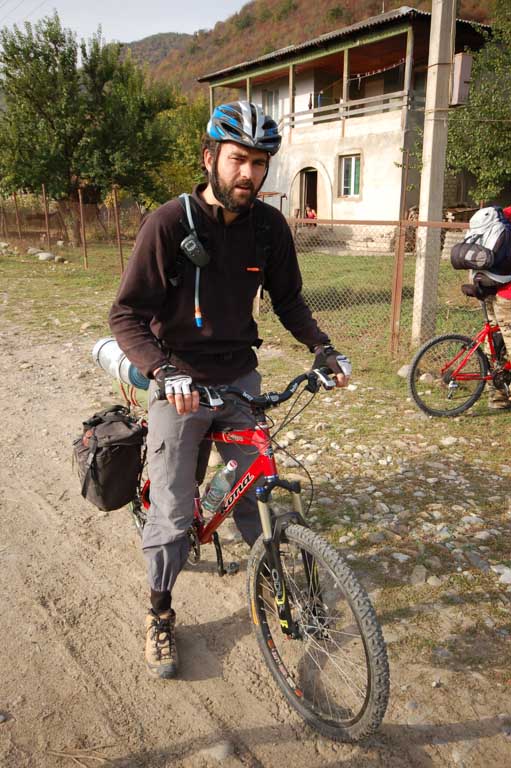 More bean stew for breakfast and then we made tracks, following the highway for 5 km to the turn off for Shatilli. From there it was a mixture of poorly maintained, pot-hole covered asphalt and dirt-track. We passed chickens and cows being herded along by a farmer and people popping out to get fresh puri (bread) from the local baker.

The first eye-popping vista of many was at the man-made Zhinvali lake. The expanse of deep-emerald water stretched far away into the distant valley, white horses dancing briskly over the water’s surface. 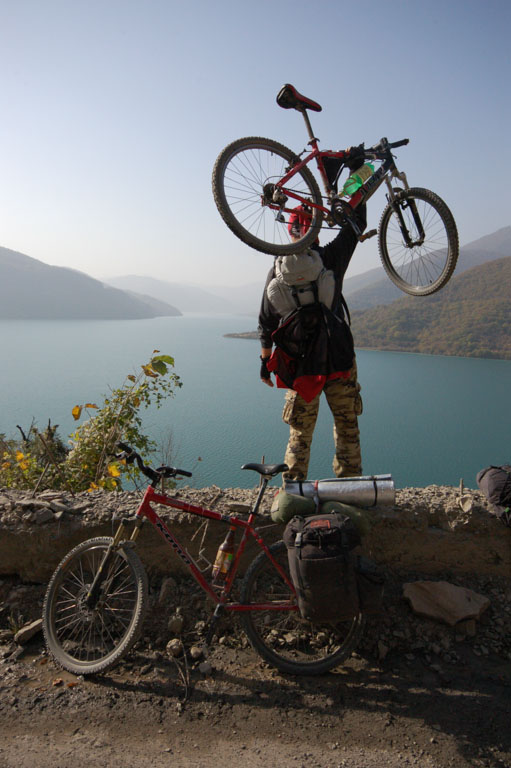 Evidence of the changing season could be seen everywhere; bright autumnal shades of red, yellow and brown created a visual feast like paint daubed onto a canvas. The lush foliage was like an elixir for the soul. I felt glad to escape from the ‘data’ of everyday living into soothing natural surroundings. The beauty of the surrounding valley was about as idyllic as I could hope for. Auburn-coloured trees on steep brown valley sides were interspersed with vein-like waterfalls, deciduous trees shed their leaves and clung onto the lower hills. 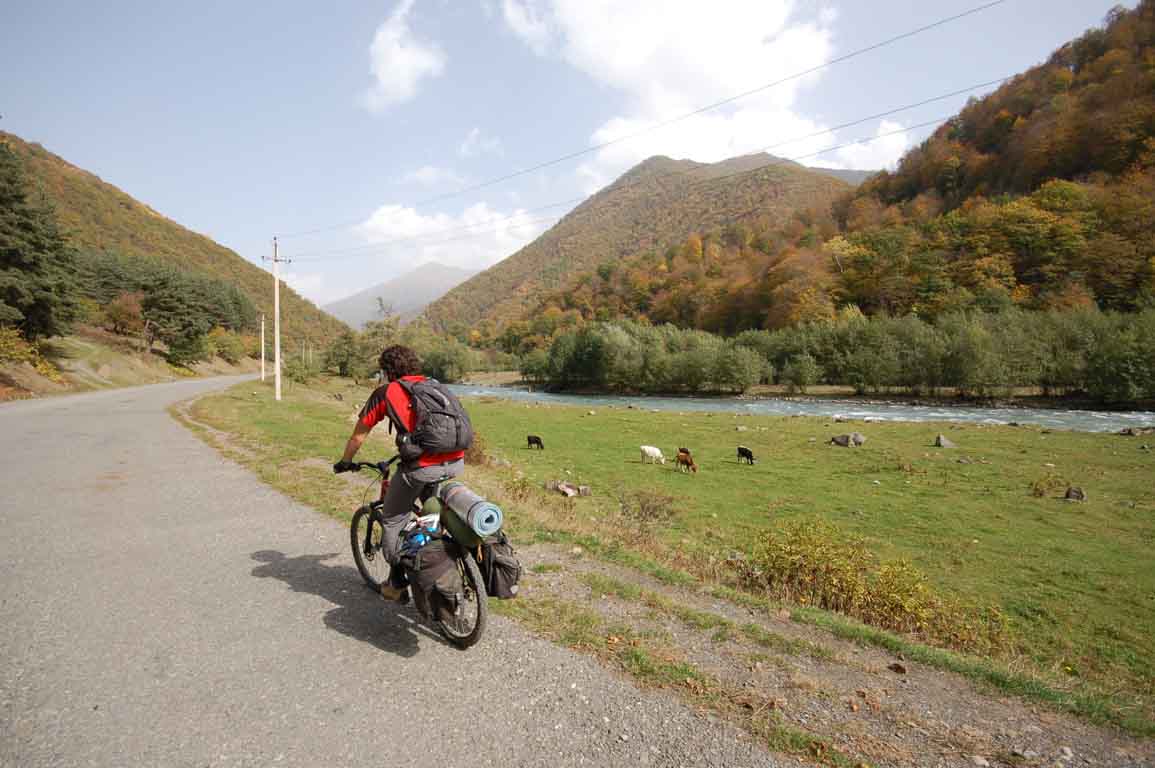 A majestic river flowed along the valley bottom and gradually became thinner, rockier and faster flowing as we progressed. David said there were some big fish in the waters. I imagined a dinner of mountain salmon sizzling over a fire.

We rarely saw a soul on the road. Occasionally we passed a man on a horse or a donkey or an old soviet van bellowing grey smoke.

Not used to the loaded bike I struggled to get into a rhythm and knocked the wheels clumsily over rocks with misplaced steering manoeuvres. A bus drove past and threw up a cloud of dust as school kids waved and shouted out of the window at us.

Before the ride began, I decided to switch to SPDs (Shimano clip-less pedals) which would allow my boots to attach to the pedals for efficiency of pedalling. But I began to get knee twinges, an old injury that had come back to haunt me from the end of my last trip to India.  I had to stop to make adjustments to try to find a sweet spot in the positioning of the cleat but with every change I made the pain would start to creep back. I couldn’t get them right and would have to concede that my knee needed to be allowed more flexibility only afforded by using flat pedals.

David was free of luggage and rode ahead and Tom, finding the pace a little fast, dragged behind. He cursed his fitness but could hardly be blamed after his recent wedding celebrations.

Tom’s mindset when he visits Georgia is to consume as much delicious Georgian food as possible. As lunchtime neared, bowls of steaming Ostri (a traditional spicy Georgian beef stew) could be seen rotating round in his eyes. Unfortunately the restaurant in the next village was closed so we settled for chocolate bars and some puffed rice crisps, that didn’t really warrant the effort of eating which was rather disappointing.

We stopped at a shop to buy cheese. The lady pottered off to her house and returned with an entire cow’s cheese, two kilo’s worth, so we bought half. The cheese was strong and pungent. Tom described it as both ‘wrong’ and ‘on another level’. David bought a couple of huge loaves of bread from a farm. I asked him how much they were and he said 1.50 lari. I replied ‘that’s expensive compared to the normal 70 tetri’. Then I saw the bread; two huge, heavy loaves that reminded me of the Trabzon loaves in Turkey.

Sharing the same camping area were a group of student alpinists who had been living there for a month doing expeditions into the mountains and a drunken shepherd who seemed mostly concerned with consuming vodka and pilfering cigarettes from anyone who would donate. In exchange he would offer a tale or twelve. 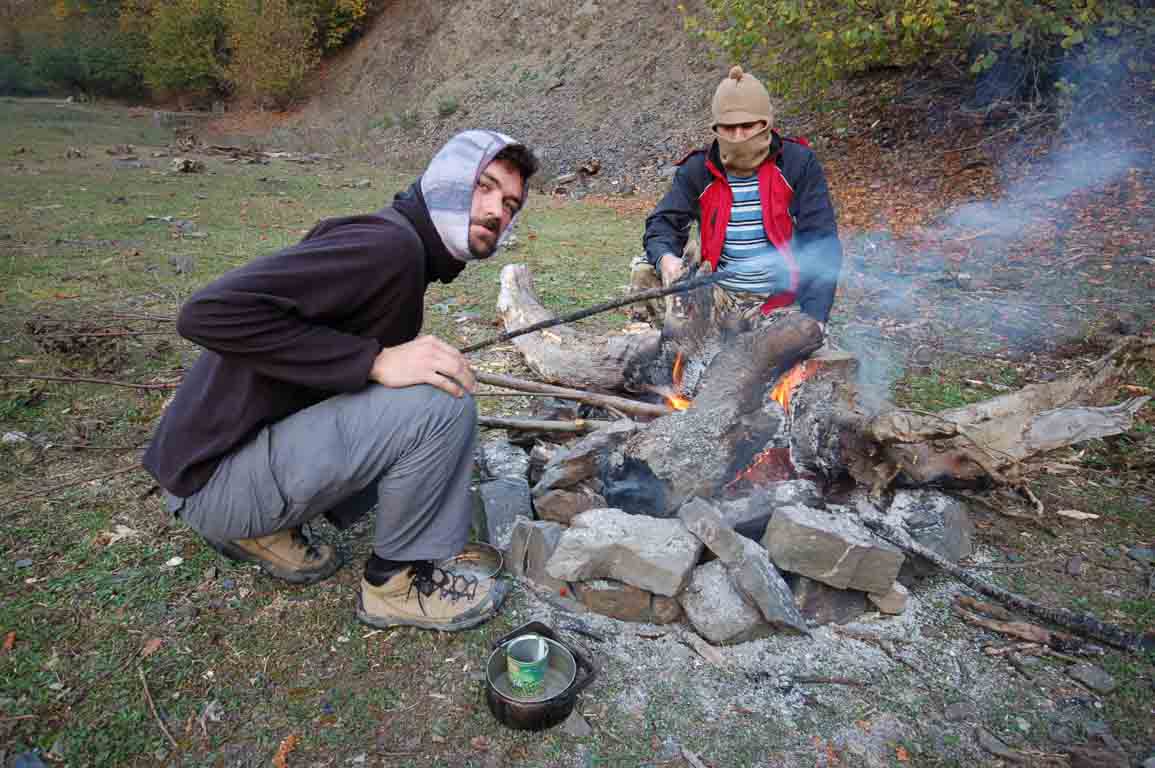 David built a huge bonfire and released the pyromaniac within. He claimed, with a great sincerity in his eyes, that it was to ward off giant red wolves. Not convinced we settled down to a dinner of potato, pea and noodle stew accompanied by dried fish, hunks of bread and gas-inducing cheese washed down with beer.

It a cold night but I had no idea, tucked up in my -25 sleeping bag and slept wonderfully. However, David emerged in the morning shivering from his thinner sleeping bag. 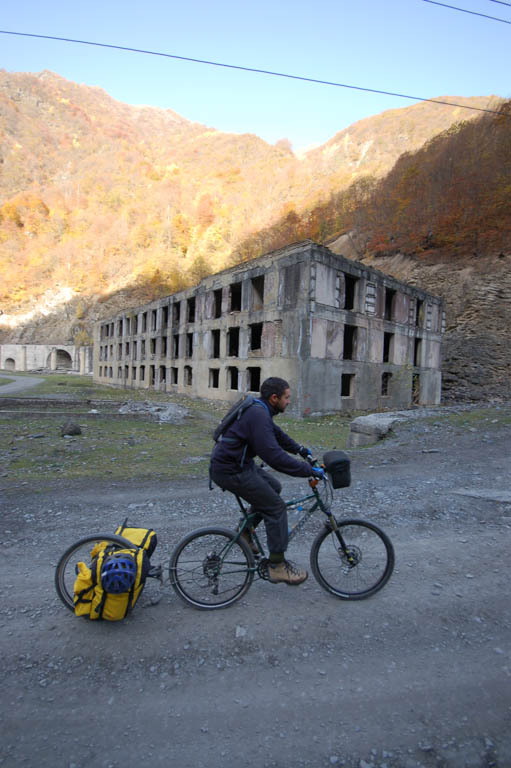 Shortly after leaving we stopped to investigate the entrance of the big derelict concrete tunnels at the foot of the off-road mountain climb. 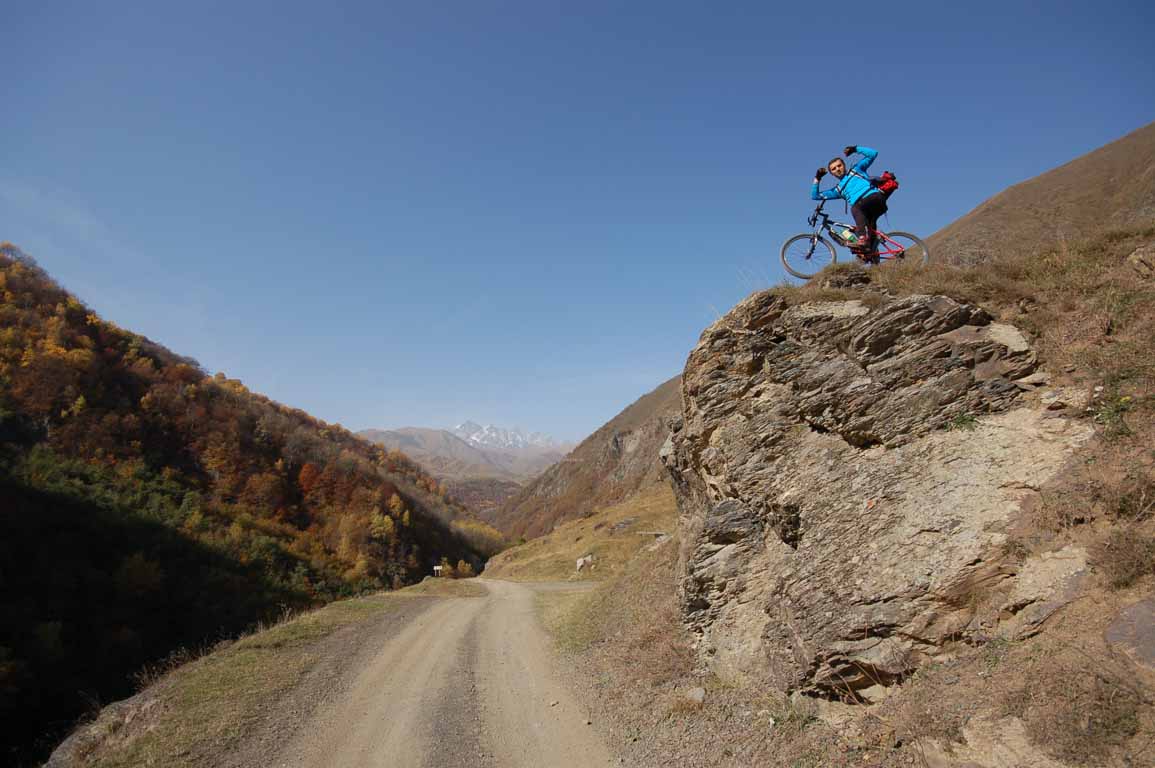 It was another beautiful sunny day with no sign of snow clouds in the sky as yet. As we emerged up through the tree-line, the white and black mountain peaks could be seen clearly. David explained he could also see the same peaks from his village near Gudauri to the west.

Tom increasingly needed rest stops and David increasingly crept ahead which started to cause a bit of interpersonal bother, culminating in a point at which they both said they were ready to go back to Tbilisi.

Hills with steep grassy banks lead up to into-thin-air cliff sides as we passed a village nested beside the river in the valley bottom, guard dogs barked at us from the houses. Other singular houses, lonely up on the hillside, made me wonder who lived there and their lifestyles; houses cobbled together from any building materials available.

We saw a couple of trucks loaded with supplies for Shatilli, probably helping to stock up before the road passes were snowed under and impassable.

The hillsides gradually became more sparsely vegetated as we passed the tree line and you could feel the temperature dropping. Sheep and cattle grazed lazily whilst shepherds and their dogs watched wearily from afar. Occasionally David would stop to chat to a local and ask about the weather.

For the last section of the climb, the process of pedaling had become very painful for Tom, who was complaining of knee problems, and had slowed to a crawling pace.

We reached the pass at about 5.30pm. The overriding positive outcome of the journey, so far, was that Tom and David had managed to settle their differences and we all stuck together; a reminder of the perils of group expeditions. 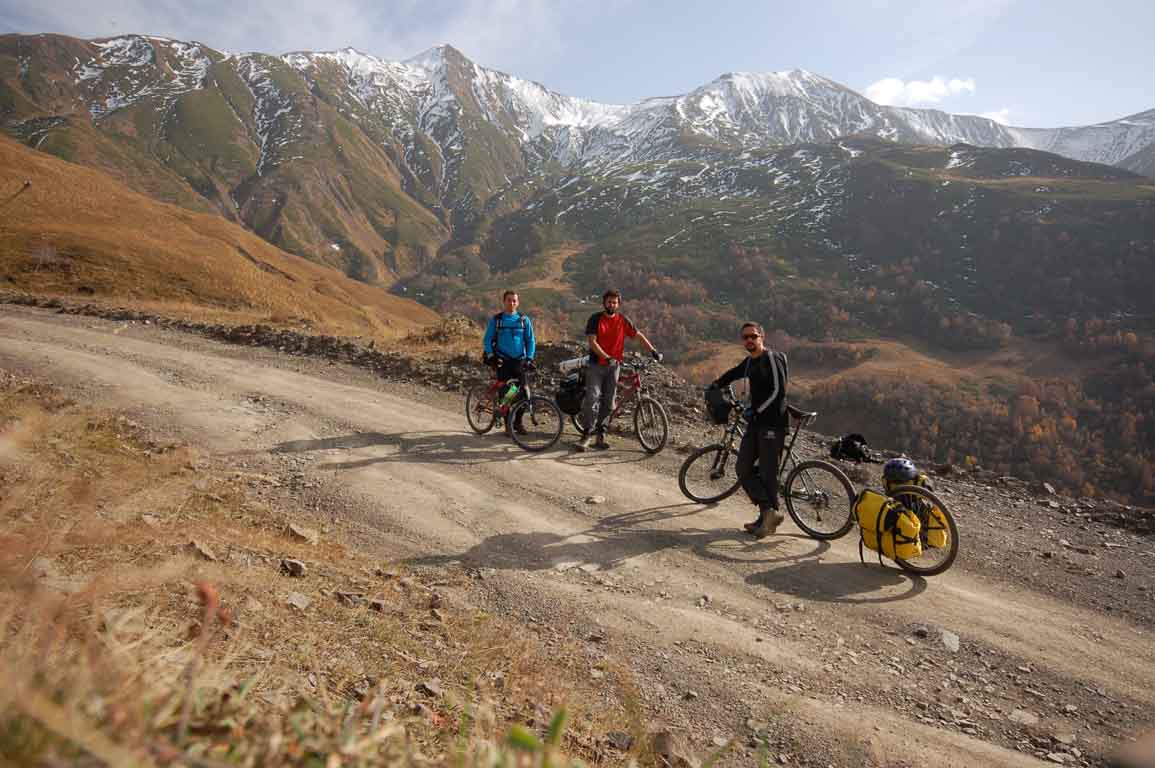 At the pass, there was a table for a supra (a traditional Georgian toasting session), along with a single memorial cross, some candles and a bottle of vodka. I took a couple of swigs to toast the dead, the liquid was raw and strong and seemed a fitting addition to the remoteness and wildness of the location.

A decision making process ensued about whether to descend down to the village of Shatilli or to head back. It was about to get dark and we couldn’t camp where we were because David didn’t have a warm enough sleeping bag. It would definitely be into minus figures as we were at the snowline. Descending down to Shatilli would mean repeating the 25km 1200m climb the next day, which Tom didn’t want to do so we made the slightly difficult but correct decision to descend back down the way we came

I was determined to get some good film footage but I now had little time to do it before darkness set it. I filmed David speeding down the track flying across the environment. I put the camera away and followed. Not quite as fun with a bike loaded with stuff but still thrilling.

The darkness gradually set in, the sky was purple, mixed into pale orange and blue as the last remnants of the sun’s light filtered through the atmosphere. Tom laying on the ground and filmed David and I skimming his ear with our knobblies kicking dust into the camera lenses silhouetted against the backdrop of the mountains.

The rest of the descent was by the light of our combined head-torches. Thinking back, it’s astonishing that it’s possible to descend 20km in the dark on a thin track with a shear drop to the side without light. We were chased by a pack of Caucasian hounds which whined, barked and bounded along at our ankles. It was comforting not to be able to see them.

We safely made it back to the campsite. We sat around the campfire and he told me stories about his meetings with Russian girls going skiing in Gudauri and other tales.

The following morning we found that we had befriended a dog because in the night it had raided our rubbish and food leftovers. Once we began cycling, it bounded along behind us. After a while it  probably regretted the decision as the only thing I had to feed it was the repugnant cheese. However, we protected the dog from other packs of wild dogs by throwing stones. 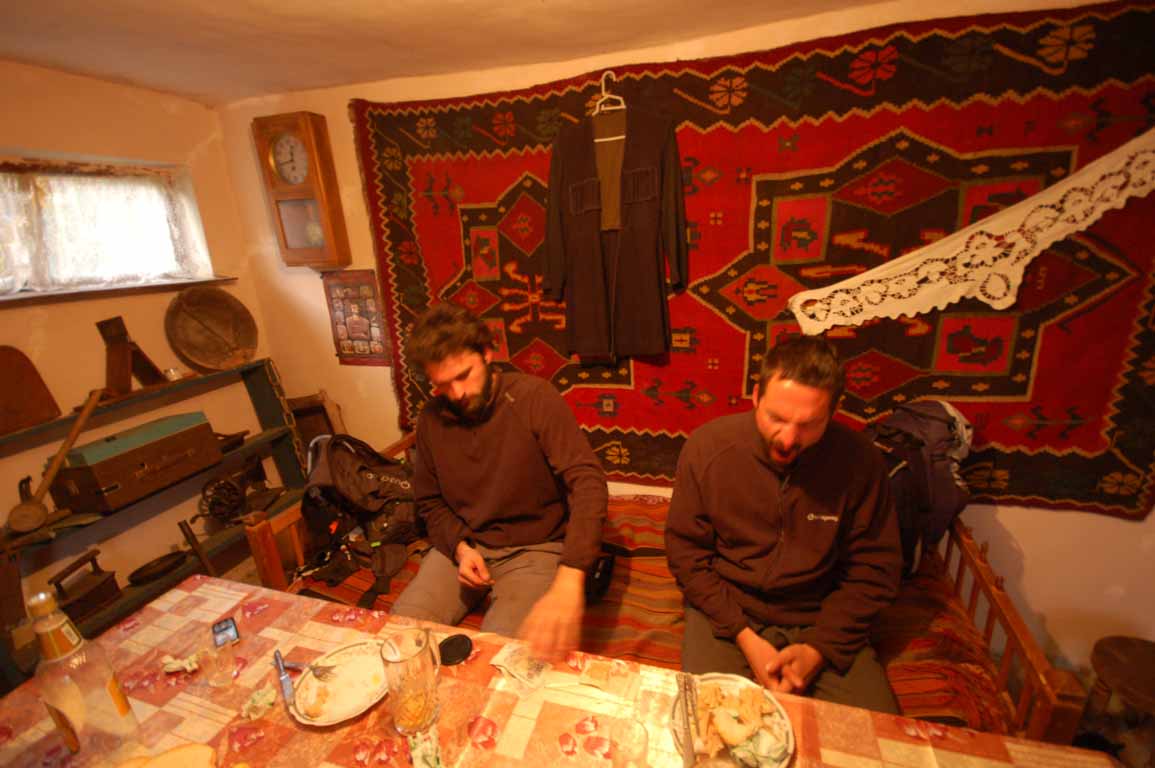 We returned to David’s village and completed the ride with a feast of Khinkhali (meat dumplings) and Katchapuri (cheese pizza), washed down with flagons of beer.

It was a good introduction to self-supported off-road trips. Next time I plan to minimise the equipment further and the Extrawheel trailer could be combined with a  full suspension bike for more comfortable off-road riding. I think the Extrawheel a better choice than panniers for off-road trips because it reduced stress on the bike frame and provides better bike handling. 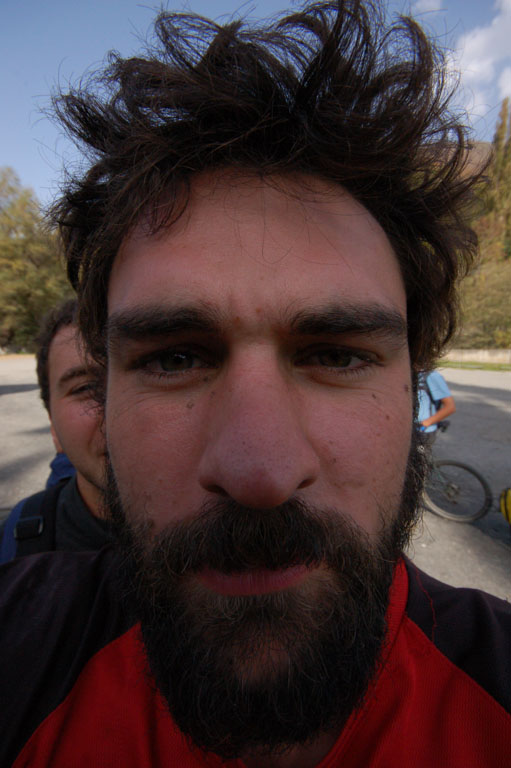 I really enjoyed the trip, the off-road, and the tranquility of the mountains. It was important that we managed to overcome the differences between the different members of our small group. There is a deeper communication that exists between humans and the environment that can only be connected to when you get out into the true wilds: Peace in the complexity and wonder of nature which is calming and life-affirming.