The last week has been a lot of fun cycling off-road through stunning scenery with a generous helping of bizarre weather conditions. 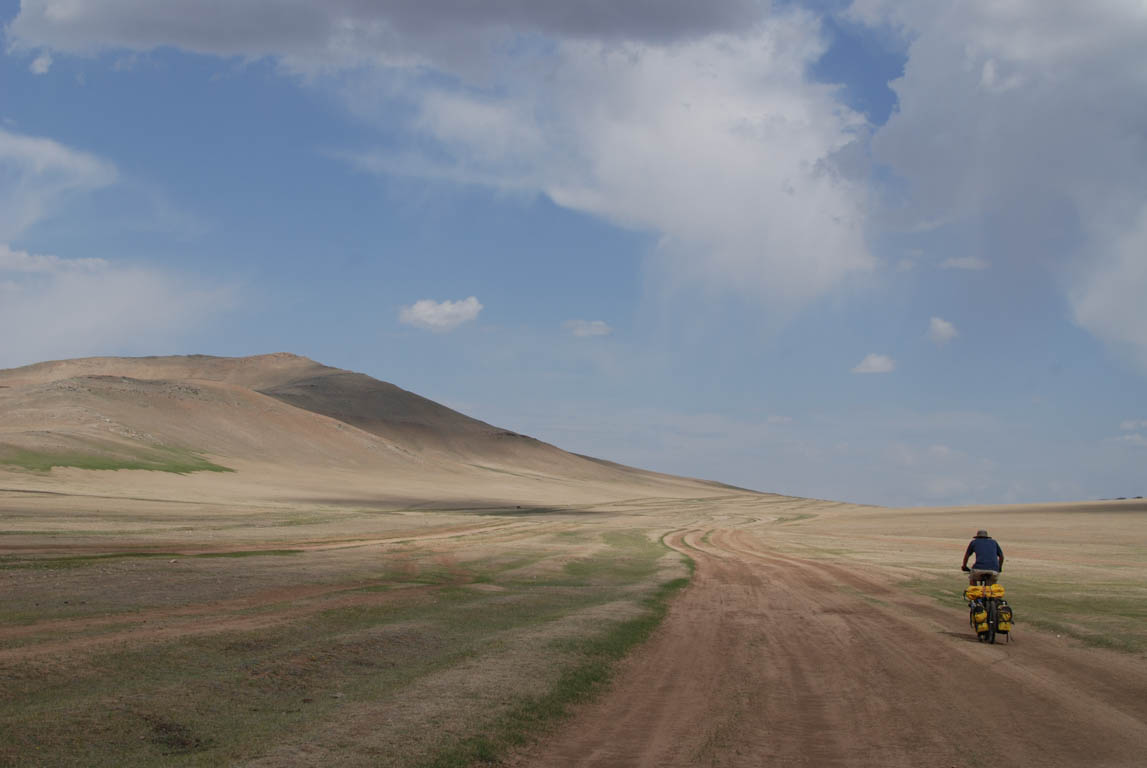 TODO: tom- another plain another day

We started out from Ulaan Baatar on a hot sunny afternoon. We cycled through gridlocked traffic but were soon outside of the city. We stopped briefly for a plate of traditional noodles with mutton and vegetables.

The countryside has been predominantly wide open hilly grassland. There are herds of horses, cattle and sheep roaming around. There are plenty of traditional nomadic Mongolian tents called gers dotted around. They are usually positioned in sheltered spots which is good for learning to pitch our own tentes.

Camping is extremely easy. It seems to be permitted wherever we choose. On the first night we pushed the bikes up a side track and pitched behind the shelter of a small hill. I awoke to hot morning sun at 6 am and the sound of seemingly wild horses galloping through the valley around me (luckily so far they have avoided going too near to our campsites).

The asphalt finished at a town called Bayanhangay. We ventured onto the mostly gravel and 4×4 rutted dirt tracks. These seem to make up most of the roads in Mongolia.

I expected it to be more difficult riding off-road but in fact it’s been much more interesting and has had only a small effect on our total distances. Our bikes are well equipped to deal with the terrain. In fact, Mongolia offers the kind of experience we dreamed of and prepared for before starting Ride Earth in 2007 in terms of adventure by bike.

The weather has been very changeable. On the third day of riding we came up against a ferocious headwind mixed with swirling clouds of dust. We continued pedalling into the wind which was a tiring and frustrating experience. However, luckily the wind changed direction to a tailwind and we flowed effortlessly with minimal effort.

A couple of days ago we were benefiting from said tailwind. We were making good progress through a valley with a few rocky outcrops visible on the hills. The track spat us out onto an immense plain which stretched many kilometres visible ahead of us.

After a few hours of mundane pedalling we stopped for a break and some snacks. A stubborn attempt was made to have a power-nap but the midday heat bore down upon us and the howling thermal winds made it impossible to drop off so we decided to continue.

After a couple of hours we crossed an area which was being cultivated. Huge ploughed fields stretched out across the flat land and tractors trundled over the surface. Clouds of dust whipped up into miniature whirlwinds and dust-devils. These seem to be exacerbated by the the ploughed surface due to the lack of vegetative cover.

The landscape was boring and we wanted to get to the next valley. As we approached the far end of the plain I glanced ahead and commented to Tom ‘what the hell is going on with the weather over there?’.

The sky appeared to be falling in. There were grey swirls which blended into an opaque brown. A huge wall of dust seemed to be hanging over the ground.

We moved closer and stopped about a kilometre away. Not long had we stopped to contemplate our next move when it was clear that the ‘weather’ was moving towards us at an alarming speed.

Tom grabbed the fish-eye lens camera and filmed me as I pulled my Buff headwear over my eyes. I jumped behind the protection of my bike panniers just as the dust-cloud tore over sandblasting us with grit and golf ball sized hail stones.

This process repeated a couple of times before the wind carried the clouds away from us. We watched in amazement as they disperse over the hills. Within the next 30 minutes all the clouds had disappeared. The sun was out and the wind had changed direction from a head to a tail-wind! The only evidence of the dust-storm was our dirty faces, fingers, clothes, panniers and the feeling of grit between our teeth!

We often met people in traditional Mongolia dress travelling either by motorbike or horse. A small Chinese-made truck is the method of choice for moving the gers from place to place.  Yesterday we had our first opportunity to see inside a Ger.

TODO: mounds on the river bed

We were camping beside a long meandering river when a guy on a horse came over to us to see what we were doing. We chatted for a few minutes. So far we have been asked the same questions each time we meet someone; where are you going? Where are you coming from? Which country? How many nights did it take you to get here?

People are friendly and inquisitive but have a very straight-forward approach. There is no hanging about making small talk, which is cool. Anyway, we were invited by ‘Bolta’ into his Ger the next morning.

We approached the Ger and were invited inside. We were given tasty bowls of fresh Yoghurt with sugar. Bolta had 700 sheep. His Ger had solar panels which powered flat-screen television and satellite. There was one table in the centre with a few chairs and a couple of beds. There was a big iron stove with a chimney leading out of a hole in the centre of the roof. There were various tools and implements wedged in the roof struts. A few cuts of dry meat hung from the sidewall. On the floor was some lino and carpet. Around the wall hung a colourful pink and green floral material. Bolta lived in the Ger with his 3 children and wife. He owned a Soviet Russian jeep and had a trailer for transporting his belongings about. It was a very pleasant experience. The Ger was warm, clean and well-ordered. The picture of a family home. Excessively out of context American cartoons on the television were the only aggravating distraction.

Tom and I are now having a rest day in the town of Bulgan which is a small and reserved place well off the tourist trail. However, it benefits from some good cheap restaurants and an excellent Internet service in the post office. We are staying in the former Soviet tourist hotel which is quite expensive but has plenty of character.