In 2009 I took photos of a demonstration in Tbilisi where people set up metal cubes in the main square and lived inside them for weeks. The photos I took were then used on a website called Citizenside, which is a crowd sourced journalist website. 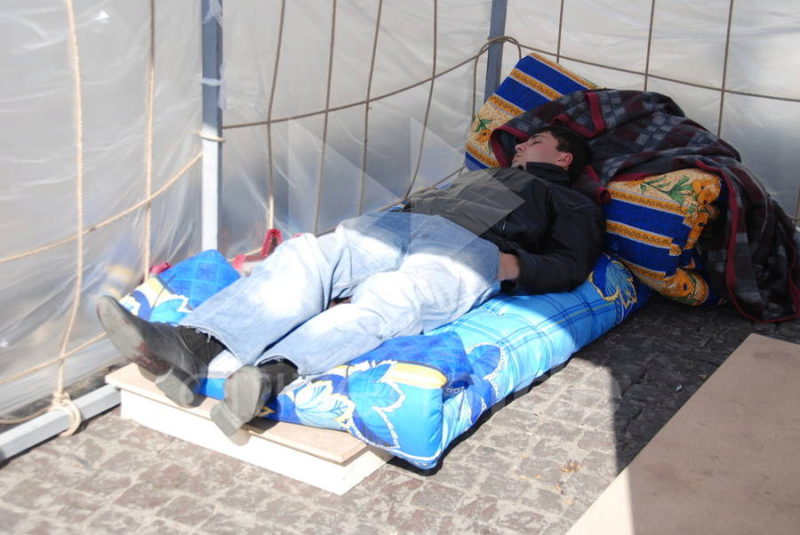 I heard about a public-driven journalism website from a friend, http://www.citizenside.com and I uploaded some photos I took of the ‘cells’ that appeared all over the main street, Rustaveli, Freedom Square and around the Parliament building yesterday morning.These metal framed cuboids covered in plastic sheeting are housing protesters claiming the president Saakashvili has been wrongly imprisoning people. When I took photos some people were still sleeping on makeshift beds inside the symbolic cells.I was pleased to see my photos validated by the website and they appeared on the front page getting lots of exposure! The link to my story is here.

Quote from the site

“Protestors who have been claiming for president Saakashvili’s resignation for three weeks take it up another levels with roll out of metal cuboid ‘cells’ covered in plastic sheet with signs - for example ‘cell 018’ - of people who are claimed to be wrongly imprisoned by Saakashvili. It’s on Freedom square, Rustaveli street, Tbilisi, Georgia, Wednesday April 22nd 10 am”, our Citizenside member says.